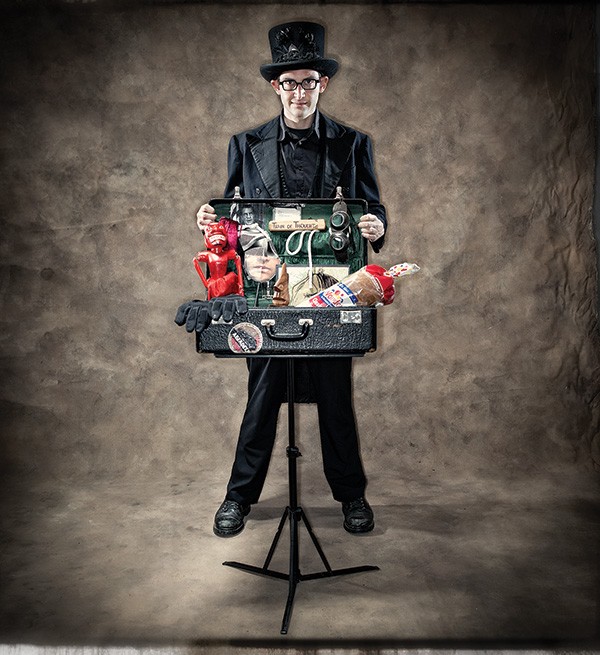 David London first realized he was a magician when he was seven years old. Donning a miniature tuxedo, he stood on stage and pulled a rabbit out of a hat to the amazement of his entire audience. Since that moment, London's journey has brought him through magic "tricks" to ritual, or, "bizarre" magic, and, finally, to an exploration of the theory of magic that asks, what does magic really mean and, more important, what can magic really do?

While studying film at Columbia College in Chicago, London enrolled in an art history class in which he explored the Surrealist movement. He immediately realized the connection between his lifelong pursuit of magic and the products of Surrealist artists; both magic and Surrealism were philosophies that valued and investigated the connections between imagination and reality. "Surrealism looks at all of existence with a magical mindset," says London. "It provides the intersection between logic and imagination, which is essential to all magic tricks." But, according to London, tricks are not all there is to magic: "Magic tricks and magic are two completely different things."

It is London's interest in the connection between Surrealism and magic that brings him to the Seligmann Center in Sugar Loaf this month, where he will be offering workshops and performances related to his craft. Surrealist painter Kurt Seligmann (1900-1962) was also interested in what London calls "big-picture magic"—that is, how the reality we perceive intersects with other realities and energies that we don't see. This intersection is what connects Surrealism to magic; both seek to manipulate perception to help access magical energy. This is what London refers to when he separates magic tricks, or illusions, from actual magic. "Magic tricks are an important way to access a magical state," London explains, "but there are many other ways to access this state without tricking your mind into it."

Here, London's ideas break from mainstream magic. London is in constant pursuit of a communion with big-picture magic. True magic, he explains, is "the experience of feeling connected to something larger than the universe around us" and can be achieved through any opportunity that takes us outside of ourselves—"art, nature, or even contemplating the vastness of the universe," he says. For London, magic is personal, it is vital, and it is intensely spiritual.

Most of us never experience this magic. Creativity and imagination are essential to unlocking our experiences with big-picture magic. "Creativity is a direct path to a magical experience," London claims. However, these less tangible faculties tend to be marginalized by society, minimizing magical encounters. London attempts to redeem creativity through his work. Deeming his approach to magic "Magic Outside the Box," he reaches beyond conventional ideas of magic to create one-of-a-kind experiences. In his children's program, "Imagi Nation," London takes his audience on an exhilarating ride in which they are all invited to use their imaginations. Through storytelling and jocular magic trickery, London fosters a creative and imaginative environment in which magic is experienced by all who engage.

So, we return to the big questions, what does magic mean and what can it do? Why devote one's time—whether it be hours or years—to magic? For one thing, magic opens our minds. It helps us view the world through varying perspectives. As London explains, "Magic is the expansion of possibility; the power of magic is to provide us a pathway to the expansiveness beyond us." As London understands it, magic is, well, pretty magical.

David London's Weekend of Magic will be offered at the Seligmann Center for the Arts in Sugar Loaf March 14 to 16, with performances and workshops over the weekend. (845) 469-9459; Kurtseligmann.org.