Getting Away to Stay Close 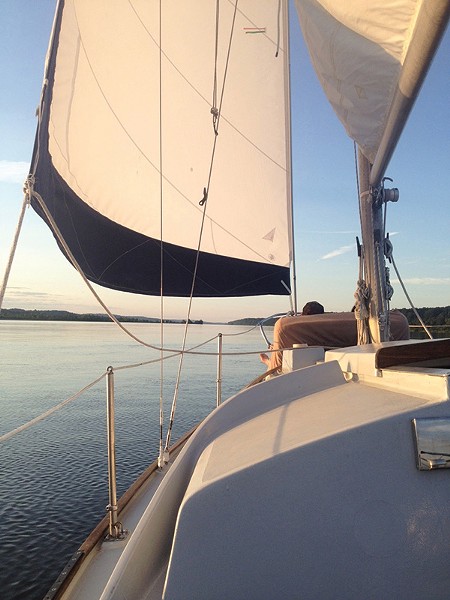 We stepped across the cold train tracks, then scanned the river and spied the wooden triangle of a restored dock. "Is this it?" I asked. Owen stepped onto it. "And that must be the boat." A 29-foot yacht was gliding on the river, a small, black pirate flag billowing among the sails. As it gingerly approached, we saw a tanned, barefoot man in shorts and T-shirt at the helm. A young woman on deck smiled. We were about to experience one of Tivoli Sailing Company's private charters—the Champagne Sunset Cruise. With Prosecco, crab cakes, and the bow couch, it's the perfect prescription for people who like to have their space. And for the date night my husband and I were seeking, it was the ideal adventure.

"Parents are often overwhelmed by responsibilities," says Elizabeth Cunningham, an interfaith minister and counselor with a practice in High Falls. She's been working with individuals, couples, and families for 16 years. What she sees in her sessions with parents is stress around balancing all the different needs—of work, the children, each individual, and the couple. Parents come to her with heads spinning. Cunningham advocates that people set aside time because it too easily gets lost in the juggle. "If you don't become intentional about nurturing a relationship, it reverts to neglect," she says.

Owen and I had just had our third child, and our time together, grown thinner, could easily become about swapping duties on our child-care checklist. The cruise was my Father's Day present to him from the kids. Owen has a thing about boats, but he's almost never been on one. So, with a couple hours of floating, without chasing any toddlers or hearing my to-do lists, he'd see his daydreams happen—not someday, but today.

When I asked around, it turned out that lots of couples date. With the Hudson Valley's obsession for farm-to-table gourmet, time to linger over a delicious meal is often a favorite. They chat above the din of diners rather than the chaos of sibling rivalries, and with options at any price point, it's a great choice for a weekly thing. Rather than take a topic off the table with a no-kid-talk rule, remember that maybe the only person who will truly understand the adoration behind your rant is the person you're parenting with. One thing to rule out, though—especially parents with the ticking clock of a babysitter's curfew—is any and all glances at the phone. Unless it's a ring from the kids, a date night is a time to connect.

For some couples, it can even be an afternoon walk. "We don't have any family in the area," says artist Jenny Lee Fowler, "so we don't usually have very long to get out, and we don't want to burn up our time going far." Fowler, who's written about great Hudson Valley hikes, chooses Black Creek Forest Preserve or Shaupeneak Ridge in Ulster County for dates with her husband. While the kids are on a playdate or at a weekend class, couples can keep it simple. Enjoy an hour at a coffee shop, go wine tasting at a local vineyard, or make it an afternoon nap.

On the indulgent end of the date night spectrum are inclusive overnight retreats. Right now, Mohonk Mountain House is celebrating its 145th anniversary with up to 20 percent off midweek stays through August 28. Packages include three meals a day, afternoon tea, and complimentary activities. With the two-night Special Occasion package, available yearround, they'll throw in fresh flowers, a bottle of wine, and daily breakfast in your room, along with nightly turn-down service and chocolate. All guests are welcome to book treatments like a couples massage,in their award-winning spa. It's the perfect option for the twosome who want a luxury vacation, without the airfare.

For those looking to nurture their spiritual relationship, Omega Institute has programs where couples of all stages can thrive. Getting the Love You Want, the Oprah-touted, New York Times-bestselling book, is live at Omega, May 23-26, when Harville Hendrix and Helen LaKelly Hunt are on campus. Long-married sweethearts, their workshop of the same name answers the questions, what are the ingredients of a great couple, and how do you make that work? And these pioneers of Imago Relationship Therapy have the answers down to a science. "Talking can be the most dangerous and most healing thing people can do," Hendrix says. "It's valuable to learn how to be connected in conversation." Their approach is a spiritual one. "Seeing the home as a place to practice sympathy and love is the best way to develop and strengthen your spiritual life," Hunt says. "And it's probably the hardest place to stay loving." Giving couples a nourishing weekend with all the loveliness that Omega is known for, the workshop promises to be a relationship spa for parents.

Plus, Hendrix says, getting the conflict and tension out of the family can be the best gift you can give your children. "The primary ingredient of thriving children is the quality of their parents' relationship." Cunningham agrees. "Children are totally into reading their parents, but they don't know how to understand or interpret it," she says. "They're little sponges, and you don't want your kids absorbing all the stuff you're not dealing with."

Wait. We can go out without kids?

Suzanne Timbrouck smiles sideways at her husband, Brian. "There was a moment in our marriage when we were going to get a divorce," she explains. With six kids at home and two careers, plus grad school, the Timbroucks had stopped spending time together. "She was doing her thing, and I was doing mine," Brian says. "We were ships passing." Like a lot of couples, they thought they were just putting the kids first. Then they realized, once everyone had left the nest, what would they do?

The Timbroucks decided to get away to a Best Western, spending so much time checking in that the babysitter threatened to unplug the phone. That's when they realized they were alone and started reconnecting. When they got home on the third day, the kids barely looked up. It was a turning point, and they decided to make it a regular date.

Recently, they went to the Rhinecliff for Date Night, their year-round, unadvertised, Wednesday-night special (ask for it by name). The Timbroucks dropped the kids off at school (with plans for their sleepovers), then walked around town, had dinner at Terrapin in Rhinebeck, and enjoyed their roomy suite and Jacuzzi. "It seemed like a high-end getaway, but not for a high-end price," Suzanne says. It was May, so, wrapped in blankets, they sat late into the night on the suite's balcony overlooking the river. "If you don't know what else to talk about," Suzanne says, "one of the most important things is to talk about your future together. What's your bucket list?" The next day, they enjoyed a full breakfast with French-press coffee and returned to their kids recharged. "You come back like superheroes, ready to do this really good job again."

In fact, the Timbroucks were so transformed by this recommitment to their marriage that they designed a twice-yearly seminar. It's called 3 to 1 Ministries, and they help six-couple groups learn how to turn it around, over coffee and dessert every Saturday night for nine weeks. "At one point, you were head over heels," Suzanne smiles. "That person is still in there."

"People think sex is supposed to be spontaneous and romantic," Cunningham says, "and, if I don't feel the urge, there's something wrong. But that's not true." For tired parents, it can take energy to even think about having sex, but Cunningham believes that sex also generates energy. And sometimes you have to make a plan to enjoy alone time in bed.

You could do it at Omega, when they offer a Tantric workshop June 6-8 taught by veteran faculty members Steve and Lokita Carter. Tantric Intimacy is new this year and tailored for couples wishing to delve into a spiritual, sensual connection. For those with little time, Lokita promises, "The tantric treasure chest has a great abundance of jewels for all time budgets!" While couples work together exclusively in a theory-oriented format, and there is no explicit sexual activity in the workshop room, there is some Saturday-night homework. That's when, in the privacy of their own rooms on the lush Omega campus, couples can practice some of the concepts learned that day, hands-on.

The crab cakes were from Adam's Fairacre Farms, and Lena grilled them off the stern and served them to us on bamboo plates with wasabi and BBQ sauce. We sat in the leather-cushioned cockpit, sipping Prosecco from Partition Street Wine Shop and chatting with Captain Jerome about Caribbean winter sails and the ages of the children Owen and I were eluding that night. The sun was glowing as it set behind the mountains, and it gleamed off the river. Dark storm clouds were rolling in from the other direction, but Captain Jerome, with over 30,000 hours of sailing under his belt, wasn't concerned. "We've got the sailing down in our sleep. So we can focus on the food, ambiance, and connecting with our guests." He calls himself a hydrotherapist because, by the end of the sail, people always chill out. He nodded for Lena to pull out the surprise—a mattress that she positioned on the bow and tucked us into with a blanket. We were sailing down to the Kingston-Rhinecliff Bridge now, spying banks and beaches of the Hudson River we had never seen before. As the midsummer wind cooled, Owen and I nestled on the bow couch in the setting sun, our cheeks aching with smiles. And I thought, we can't choose who we fall in love with, but we can choose whether it grows deeper with time.