A writer, a gentleman farmer, and their 19th-century farmhouse in Valatie

After the series' success, Callan decided to stop just writing about the Francophile philosophy of happiness and actually live it, here in the States. Thompson was all in—they both wanted a return to the simpler country lifestyle they'd enjoyed as children in Connecticut, but the Connecticut they'd loved as children had become too suburban. They began searching the wider East Coast for a rustic farmhouse with some land, but both were attracted to the Hudson Valley, which Callan knew well from her days at Bard. They loved the area's bucolic landscape and its strong ties to arts and culture. They came across the farm in Valatie in 2015. Like many charming farmhouses, the home had a long, rich history. The Federalist-style main house first appeared in public records in 1856, but the couple suspects the property actually dates back to the 1820s. Once part of the much larger estate, the 50 acres include barns, a hay loft, corn crib, a granary, and a smoke house, as well as a Greek Revival carriage house across the road. At one time the 3,200-square-foot home had even been split for two families, with an extra kitchen added in the rear, southeast wing of the house. The farm's most recent incarnation was as the center of a large homeschooling consortium with small classes and learning spaces throughout the house and barns. "We could feel the joy when we walked in," recalls Callan. "The floors quivered." 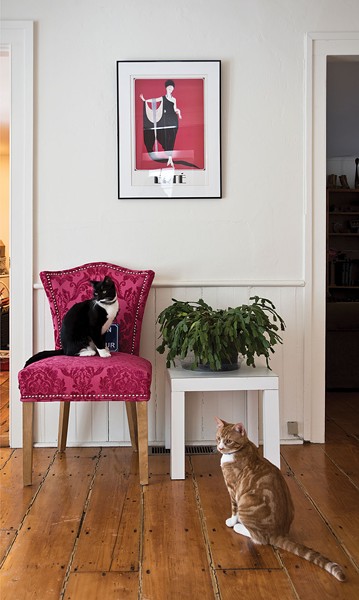 Although the farmhouse was romantic and rambling, it didn't need too much restoration. The three-bedroom, three-bath home had been well preserved by previous owners. Eight foot ceilings throughout the house featured ornate crown molding and wainscoted walls. It also retained the original wide-plank heart pine floors, which stretch through both stories. "The floors are really what made us fall in love with the place," says Callan. "You can't get floors like this anymore."

Downstairs, the original entrance leads to a long hallway with doors on either side; one leads to a cheery parlor and the other to a formal dining room, both with working fireplaces. However, the couple and their guests more often enter the home through the kitchen door—it's become the heart of their newly cultivated farm-to-table lives. Updated in the 1980s, the space includes a large, V-shaped island and the appropriate accoutrement for a modern chef. Another fireplace, this one closed, is hung with drying garlic and herbs. At the back of the house, a covered porch was converted into a solarium and the former second kitchen is now Callan's office, filled with books, a long desk, and notes, as well as prototypes for her upcoming projects.

Upstairs, the master bedroom includes a fireplace and an en suite bathroom. The two additional bedrooms are saved for guests, with one room especially outfitted for the couple's grandchildren. It's also an homage to Callan's French grandmother, who worked in the family vaudeville act, playing music and sewing costumes. A rack of colorful clothing hangs along one wall, and Callan converted her grandmother's original sewing table into a desk for her grandchildren.

It's the surrounding 50 acres of gardens, orchards, and fields that have really given both Callan and Thompson the chance at that life of simple happiness espoused in her books. "It's the classic New England, three barn set-up," explains Thompson, describing the large red barns at the edge of the property where the couple keep chickens and turkeys and have an adjacent fenced garden for vegetables and herbs. As a "gentleman farmer," Thompson has enjoyed working with the seasons and says the slow process of nurturing seedlings has reconnected him with the cycles of nature. He begins with planting seeds in early spring in the solarium and then hardens the seedlings right outside on the porch. By summer, the garden is in full bloom and the couple sell part of their harvest at the Valatie farmers market on Saturdays. (Thompson also ferments his own hard cider from their apple orchards.)

However, plenty of the farm's bounty is set aside for Callan and Thompson to enjoy themselves or share with friends. This, more than anything, Callan discovered, is the crucial ingredient for a life well-lived. "There's an old French saying," she explains, "'The sweetest happiness is the one that we share.'"