A writer, a gentleman farmer, and their 19th-century farmhouse in Valatie 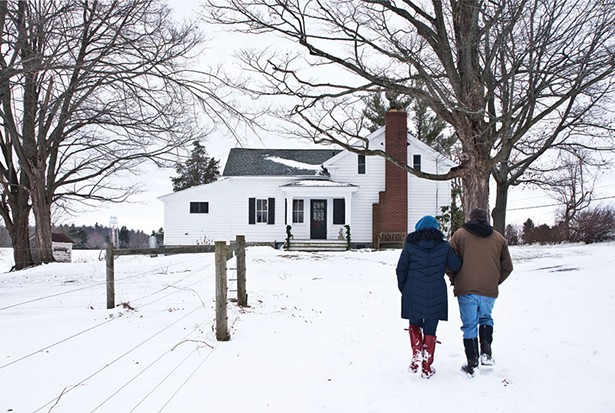 There's a certain storyline that goes like this: A big city heroine, with a fast-paced career filled with wealth and success, feels her life has lost its charm. So she chucks it all away, and, in an attempt to recapture simplicity, pursues happiness in some bucolic, Old World setting. In some stories, the protagonist finds herself in Tuscany, in others on a Greek island, and in many it's a tiny French village where she goes to reclaim her joie de vivre. Whatever the setting, there's always a lovely old farmhouse, rich with history but often in need of restoration; there's a garden that needs tending; and there's a historic village where life is slow and the locals may be quirky, but always have something to teach. Somewhere in the course of the story the hero slows down. Somewhere along the way of restoring the old farmhouse, rediscovering the earth, and lingering over good meals shared with new friends, the hero gives up her endless pursuit of happiness, and pauses long enough to savor the moment.

The twist on this tale, for author Jamie Cat Callan and her husband Dr. Bill Thompson, was that the life of simple pleasures and the lovely, old farmhouse in the historic village with lots of character wasn't found abroad, but right in the Hudson Valley hamlet of Valatie. It wasn't just a garden that needed tending, but also an orchard, hay fields, and a barn. And instead of escaping to the Old World, they discovered some of the Old World's secrets and brought them back to the States—to share with friends, readers, and now neighbors who stop by their booth at the Valatie farmers' market.

Both Connecticut natives, Callan and Thompson left the countryside years ago to pursue their respective career paths. Thompson began as a musician and music store owner and then became a geologist with the Woods Hole Oceanographic Institution on Cape Cod. Callan, a graduate of Bard College, has enjoyed a successful writing and teaching career for over 35 years. She started out in Manhattan writing "color stories" for the ad world and then published her first young adult novel, Over the Hill at 14 (1982). It was a success she could build on, and, after publishing two more young adult novels, she made her way to Hollywood, where she worked as a script reader for Paramount Pictures and then became an assistant to Meg Ryan during the actress's reign as "America's Sweetheart." ("She is actually adorable and very, very kind," Callan reveals.)


It was the Northridge earthquake that sent Callan and her daughter back to the firmer shores of New England, where she began a job teaching creative writing at Fairfield University in Connecticut. (It's also where she met Thompson—a romantic tale featured in a 2006 New York Times "Modern Love" column.) The relocation also spurred a deeper investigation into Callan's French heritage—particularly the feminine side of French culture and specifically the story—and style—of her French grandmother. "For a long time, I was very much an American and I was out of balance," Callan explains. "I would do everything to extreme—buy more stuff than I needed because it was cheap. I wanted more and more and more and it had to be fast, but it was never quite enough." Callan went searching for a simpler, more meaningful way of life. This quest led her to her grandmother's homeland, France where she returned on multiple occasions, exploring villages and cities and interviewing French women from all walks of life recording their take on French culture and social history.

She found herself in the 11th-century French village of Auvillar, in the south of Bordeaux, where she was granted a month-long residency. The slower pace of Auvillar and the time to immerse herself in small town French life revealed an important value that Callan believes we in America have lost as a culture: savoring simple, ordinary moments. "We have this pursuit of happiness," Callan explains, "But the French don't have that. Why does someone have to go chase after happiness? It's right there in front of you." This revelation, and the friendships she'd made over her many travels, lead to the first in Callan's series of best-selling books exploring the French life-style, French Women Don't Sleep Alone (2009). It was so successful she went on to write three more books, the most recent—Parisian Charm School—was published in December. It's her deepest dive into French philosophy and culture yet. "I feel like I got to the core—it's really about knowing who you are, and that begins with reading and appreciation for the intellect, then being aware of the world you live in," Callan explains.

Weeds with Laura Wyeth Part I: Meet the Ruderals

A Hemlock Home on the Hill