Jump-starting a more creative existence can help us hop off the productivity hamster wheel, ease burnout, and bolster wellbeing. Two experts help to demystify the process. 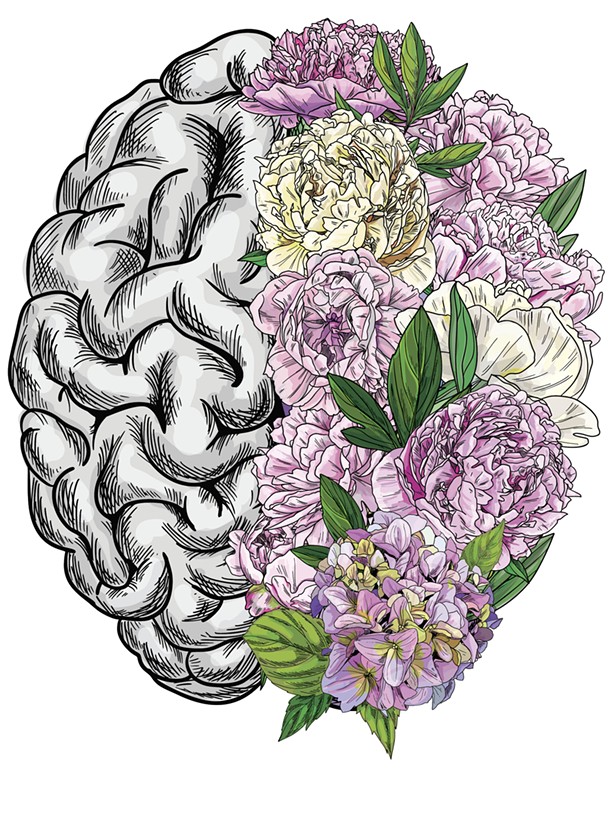 Dana Dorfman had always wanted to write a book. That’s how, in 2015, this New York City psychotherapist ended up at a weekend writing retreat led by Accord-based creativity expert Jeffrey Davis at Mohonk Mountain House. “It was a group of 10 or 12 of us, all from much more creative worlds than I was, or that was my perception,” she says. “I thought it was going to be a tutorial on writing a book, but I underestimated how much spiritual growth I could do to add richness to my process and ultimately toward the product that I would offer to other people.” As a therapist to adolescents, teens, parents, and couples, Dorfman is no stranger to self-exploration. But she’d never dug into her inner life in the way that Davis invited her to—with the intention of bringing out the innate creativity hidden within herself (and all of us).

“He had us doing all these different exercises to tap into parts of ourselves,” she says. Some took root in journaling, yoga, and meditation activities designed to help spark and maintain creative work. But the one that resonated most was Davis’s “young genius” exercise, which involves remembering a time from childhood when you felt most alive, free, and truly yourself, without regard for reward or recognition—and then reclaiming those past qualities and bringing them to work with you in whatever you wish to do or create. “I was really connecting to this part of myself that liked to just sit around and think, because as a kid, that’s what I did,” Dorfman recalls. “I was always judgmental and thought of myself as a space cadet or a daydreamer. Now I could reframe this quality to see it as a gift. It’s integral to my sense of self, or sense of soul. I learned to honor it and make space for it.”

After the retreat, she went back to a full-throttle life as a busy therapist and mother of two. While the teachings stayed with her, she struggled to fit them into her overstuffed schedule. She continued working with Davis in various ways, but it wasn’t until 2020’s COVID-19 lockdown that she found the space and time to really live the practices. “While the pandemic was unbelievably upsetting and sad and disruptive and disturbing, it also eliminated so many of the distractions,” remembers Dorfman, whose first book—about parents’ anxieties around their teenagers’ achievements—will be published in April 2022. “My family of four was in survival mode in Brooklyn, and there were protests and rallies going on right outside our door. I had to create these spaces for myself to be able to stay in the flow. So, I dug in deeper to a lot of the practices that [Davis] had introduced, and really benefited from them.”

An Imperative to Think Differently

With the pandemic almost two years old, a planet that’s heating up, and a populace that’s had enough of age-old racial inequities, we’re living in times that call on us to flex our creativity to solve challenges in bold new ways. When stay-at-home orders clamped down, businesses and solo professionals had to pivot almost overnight, whether it was from on-site to remote work, in-store shopping to curbside pickup, selling wedding dresses to sewing masks and hawking them on Etsy. “Think fast” was the mantra, and in many ways it still is. Davis, whose book Tracking Wonder: Reclaiming a Life of Meaning and Possibility in a World Obsessed with Productivity comes out in November, believes that we humans collectively have an imperative to foster creativity—which he defines as our capacity for bringing new and useful ideas from seed to fruition. “Since 2020 we’ve had a deep reckoning with the status quo,” he says. “Our notions of toxic productivity, our broken institutions, social and racial injustice, all these things we are collectively calling into question, and there are constant challenges and problems with each of those. So, at a cultural level, we can foster more creativity and curiosity not only to question the way things have been done, but also to ask, how can we create better solutions?”﻿


We need creativity to navigate times of uncertainty and collective trauma, but we also need it for our quality of life, our wellbeing, even our very souls. For proof, just look to the workaday world’s unprecedented levels of burnout. People are exiting the workforce or changing jobs in record numbers (close to 3.9 million in July) in what some are calling the Great Resignation. A recent global study by Adobe of 5,500 workers and small-business leaders found that our youngest workers (Gen Zers and Millennials) are driving the exodus, though it’s touching every age group. “There’s definitely a reassessment of work that’s happening now, with people wanting to find more purpose and meaning in their work,” says Natalie Nixon, a Philadelphia-based creativity strategist for work teams and individuals, and author of The Creativity Leap: Unleash Curiosity, Improvisation, and Intuition at Work

Yet across the US, our creative talents have been sadly flagging. In her seminal 2011 study “The Creativity Crisis” (and her 2016 book, The Creativity Challenge). Kyung Hee Kim, PhD, a professor of creativity and innovation at the College of William & Mary, found that even as students’ IQ scores rose after 1990, their creative thinking scores took a nose dive—whether you blame it on screen culture, rote education, or something else.

The bright spot is that we can turn this around: We can, perhaps even must, cultivate creativity as a learned skillset that yields dividends in the form of our mental, physical, and emotional wellbeing. It starts with recognizing that the capacity for creativity exists like a birthright or biological urge within us all. “We tend to ghettoize and silo creativity in the arts, and that’s not fair to artists, nor is it beneficial to our society at large,” says Nixon. “The best engineers, the most incredible scientists, the best plumbers and farmers and teachers, are incredibly creative because they are intentionally toggling between wonder and rigor to solve problems. But while I do think creativity is embedded in us as little humans, as children, it is something that we have to intentionally build and practice and exercise.”

Wonder Is the Magic Spark

How can we amplify creativity in our lives and work? “We can up our wonder ratio,” says Davis, “and we can build our creativity skillsets on a regular basis.” Thinking of wonder as a heightened state of awareness brought about by something surprising that delights us, disorients us, or both, he proposes making a habit of tracking wonder, just as a naturalist would track a wild animal. A daily writing practice in an analog notebook can become a kind of butterfly net where challenges, questions, and epiphanies collect along the way. We can also glean from what Davis describes as six facets of wonder: openness, curiosity, bewilderment, hope, connection, and admiration. He notes, “One of the common threads I’ve found in [innovative] people from Arianna Huffington to Richard Branson, and even people who were traumatized in their childhoods, such as Maya Angelou, Oprah, and Mary Oliver, is that they have maintained an abiding sense of wonder and of their young genius—this playful, exploratory, curious, and even confident part of themselves.”


For Nixon, a practice of wonder is never very far from rigor, its dynamic counterpart. While wonder blows the mind open to novel possibilities, rigor is the activating principle that takes a new idea from seed to fruition. “Rigor is about discipline and focus and time-on-task and fundamentals,” she explains, likening it to playing scales if you’re a musician. “It’s not particularly sexy and it’s often very solitary work. But in every rigorous process, there’s wonder embedded in it, and there’s always a wondrous ‘A-ha!’ moment that emerges.” To build this capacity, she recommends rigor sprints—or bursts of focused work such as writing or brainstorming sessions of no more than 12 to 40 minutes. Then, make space for a deliberate daydreaming break, so you can let your thoughts wander and your mindset shift. When you’re not working, Nixon advises becoming a “clumsy student” of something to help build your wonder and your rigor. While one of her clients chose chess, she loves ballroom dancing. “It’s igniting new and different neural synapses in my brain,” she says, “so when I go to my daily work, I’m more confident about asking questions and I’m more open to improvising.”

That last word is one of the “three i’s” that Nixon considers integral to creativity: inquiry, improvisation, and intuition. By asking “I wonder” questions, daring to go off script, and following your gut, you can bring creativity into play in consistent and sustainable ways. Davis also embraces riffing and getting curious. “If there’s a challenge or problem in your personal or work life, treat it like a project,” he says. “Maybe it’s, ‘How can I make Zoom meetings less boring?’ I have managers who now lead their team meetings with questions like, ‘What surprised and delighted you this past week?’ These types of questions get people out of their default checklist ways of doing things, and they can connect on a whole other genuine level.”

Creativity Lives in Everyone

Opening people up to the value of wonder, especially in the work world, can be a challenge sometimes—but it’s not just kid’s play. “The wonder piece is not a loosey-goosey, woo-woo agenda,” Nixon explains. “It’s an essential part of creativity, and it’s fundamental to being human.” It also comes with health benefits. “Some studies out of the University of Arizona show that experiences of wonder disrupt our default mode of attention, disrupt our biased ways of perceiving the world, and bring us almost into an instant state of mindfulness,” says Davis. “The heart rate slows down and the fight-or-flight response halts, calming the nervous system.” Other studies out of the University of California, Berkeley, connect wonder with regulating the immune system by promoting healthier levels of cytokines, the proteins that gather our cells to fight off disease (if released excessively, cytokines are associated with disorders such as diabetes, heart disease, Alzheimer’s disease, and clinical depression).


Through wonder’s portal, creativity gets demystified—becoming less intimidating and more actionable. In addition to their books, Davis has an international Tracking Wonder community and Facebook group, while Nixon created a WonderRigor Discovery Deck card game for work teams, and an online course for individuals called the WonderRigor Lab.

For Dana Dorfman, Davis’s longtime student who realized her book-writing dream, the serendipity is in learning to set the stage for creativity to emerge, and then following the cues of her young genius to unexpected places. “I had thought publishing a book would make me feel more legitimate, acceptable, whatever,” she says. “But this process has been so much more. I think more creatively now, and the book is almost secondary to all the emotional and spiritual growth that I’ve done. I marvel at that.”