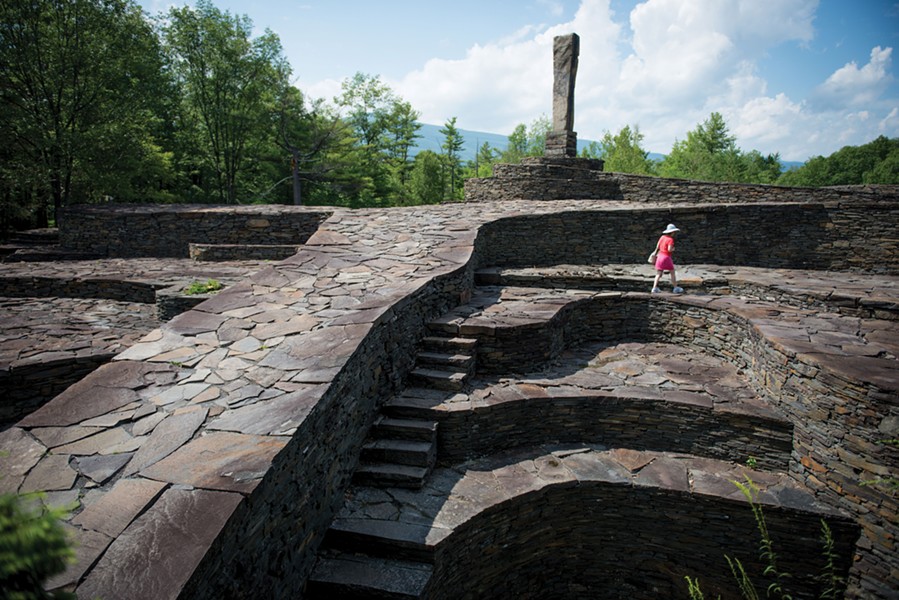 Anyone with half a brain can see that the once-maligned hippies were right about too many things to list. When Vogue magazine produced a Woodstock travel guide in 2014, noting that "tie-dye is back, from the runway to home décor," locals were unsurprised. Tie dye, around here, never went away.

The Most Famous Small Town in the World flies its peace signs with pride. A casual observer might be forgiven for thinking this place is resting on its hippie laurels, stuck in time. But quirky, iconic Woodstock, home of high-end creative pyrotechnics for well over a century, gifted and burdened with the legacy of the Iconic Concert that Wasn't There, continues to grow into all that mojo through a constant stream of reinvention.

Counterculture is culture here, a regal generational inheritance. Icon Levon Helm's daughter Amy, all over the mainstream media with the July release of her solo debut album, Didn't It Rain, thanked three parents: the legendary Levon, stepfather Donald Fagen of Steely Dan, and singer-songwriter mom Libby Titus, the woman who loved them both.

Another local imp, Daisy Kramer Bolle, grew up learning fine apparel as the daughter of Woodstock retail rock stars and honed her stylist chops in Los Angeles and St. Tropez before moving to Saugerties, declaring it the "New Riviera," and launching Dig, her upscale boutique. Dig the Shop is currently starring as a location in I Dream Too Much, a well-received indie unveiled at the Manhattan Film Festival; Danielle Brooks of "Orange is the New Black" makes her cinema debut therein as a Dig shop girl. Plainly, the creativity deities who rained down blessings upon Woodstock didn't let up as they headed east to Saugerties. The combination of world-class HITS horse shows and a steady stream of shout-outs from Jimmy Fallon may have put this town on the map, but stellar good times keep it there. Separated from its famous neighbor by a scenic 10-mile stretch of highway 212 that has attained a vibrancy all its own as "Saugerstock," Ulster County's other north star is also risen, but by no means an also-ran.

Overspill is ubiquitous: the Orpheum in Saugerties has been part of the Woodstock Film Festival since 2013, and WDST Radio Woodstock sited their inaugural Craft Brew Boogaloo at Saugerties' Cantine Field this year. "I grew up here when this was the antiques capital, back in the `70s and `80s," says Marjorie Block, who's worked painting Chagalls and Renoirs on wax for Candlestock in Woodstock for several decades and manages both tourism and the historical society in Saugerties. "It's always had magnetism, but it's different now: gluten-free pizza, brilliant small boutiques. Lots of young people. HITS was a springboard, but the growth has just snowballed."

Only a town with its own devotion to art, Block points out, would disassemble and reassemble a Dutch barn as a gallery and event space behind its historical museum. Or repurpose a former factory as the Saugerties Performing Arts Center. There are studio tours (Saugerties Artists' Studio Tour August 16-18, see page 106) and sunset concerts, a thriving farmers' market, and an upscale B&B in the restored 1869 lighthouse. "The Food Truck Festival [at Cantine Field] is monthly," says Block, "and you can't get a parking spot on First Fridays lately."

June's First Friday included Woody Harrelson stopping in; July featured a chocolate fountain at Lucky Chocolates and a theatrical, whimsical "Midsummer's Night@ Juda Leah atelier and boutique" event along with the usual standout street performance, locavore grub, and live music. But even galloping into a glamorous, prosperous future, Saugerties keeps a hoof firmly planted in the small-town traditions that sustain it: its Garlic Festival and car show are all-volunteer community benefits. "A lot of people don't realize all the proceeds go to the kids by way of the Kiwanis and such," says Block. "It gives us the means to have things like an Olympic-sized ice rink, a skate park—it provides coats for kids who might be cold, money for the schools."

In Woodstock, the historic Bearsville Theater property loved into prominence by rock-production legend Albert Grossman may have been taken over by international business interests, but the partners knew better than to mess with its hippie roots: they birthed the Commune Saloon, which has rapidly become a can't-miss with its fire pit, bluestone patio, evolving rooftop garden, and Happenings.

Example: Woodstock native Debbie Dougan, an aesthetician by trade, dreamed of an alliance of local businesswomen. Women Empowering Women, not yet a year old, just got done packing the house at the Bearsville for "Calling All Angels: An Evening of Duets," a smash-success benefit for WEW and Family of Woodstock's Washburne House. Grammy-nominated musician and producer Elizabeth Mitchell orchestrated a spine-tingling and heart-melting array of talent. "Hearing Amy Helm perform with nine-year-old Olivia Siegel...Just wow. I'm just glad I was there," says local event promoter Abbe Aaronson. Somewhere, Levon and Albert are toasting Dougan, and Janis is grinning from ear to ear. That may be the real secret of the lasting legacy of hippiedom: firm, thick roots and a relentless focus on loving the community and next generation. The events may not resemble great aunt Mildred's PTA fundraiser, but in both Woodstock and Saugerties, kids are celebrated. The Paul Green Rock Academy, providers of authentic rock music instruction to kids as young as three, is hosting a WEW Artisan Pop-Up at its annual free showcase on August 1 in Saugerties.

Meanwhile, WDST is busily planning a 35th birthday celebration, the Speed of Sound Festival: the Avett Brothers, Hot Tuna in their electric configuration, Connor Kennedy and Minstrel, Amy Helm and the Handsome Strangers, and more. Radio station president Gary Chetkof wanted to do something intimate in comparison to the riotously successful Mountain Jams, and ended up reserving the Dutchess County Airport for his little benefit party. Like the Bernie Sanders campaign, Woodstock/Saugerties energy regularly busts right out of its own venues, wearing its heart on its sleeve and its talent with a bodacious boldface capital T. Come play on the home ground. You'll understand.