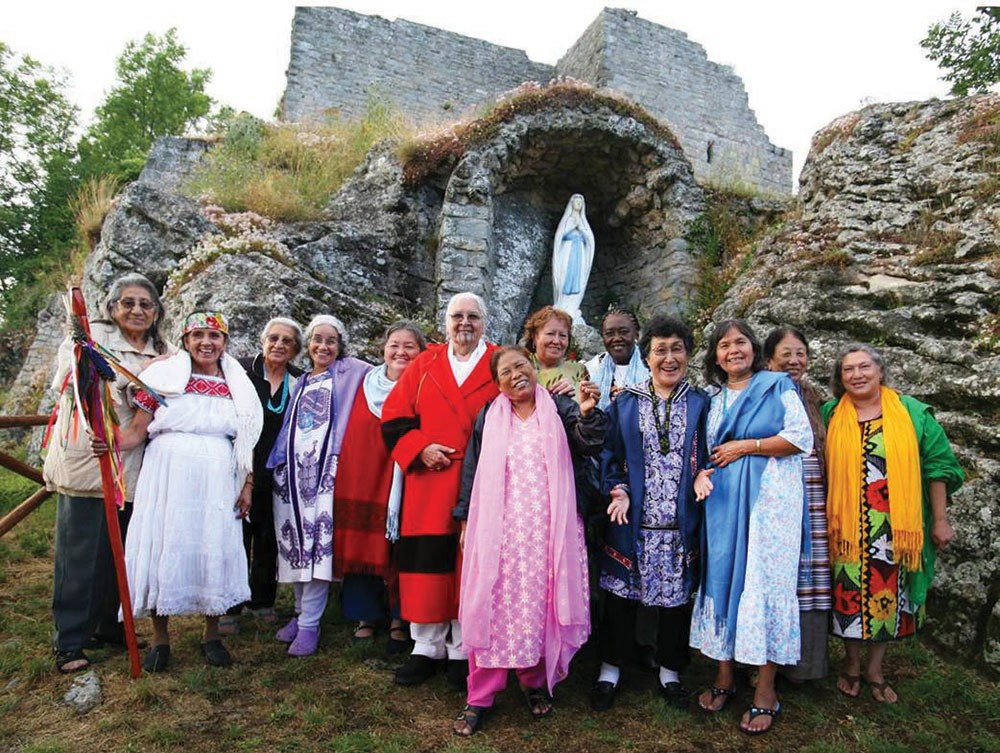 When13 women from native communities around the world came together at Menla Mountain Retreat in 2004 to commune and declare their intentions for world peace, they set in motion a wide range of actions. Empowered by a mutual resolve to affect changes for the betterment of their people—and for all humankind and the Earth as well—the 13 Indigenous Grandmothers have engaged in a full 12-year cycle of peacemaking. In their own communities across the Americas and as far away as Japan and Tibet, they've held annual Grandmothers Council gatherings to support one other and bring appeals for the restoration of justice to every member's homeland.

One of these revered elders said she wanted to see the Vatican rescind all papal bulls (edicts) that have adversely affected native peoples for the past five centuries. And she wanted all the sacred sites in the upper Midwestern United States to be returned to the great Sioux Nation people before the end of her life. Grandmother Beatrice Long Visitor Holy Dance died last March, but not before passing this charge to her eldest daughter to carry on. To fulfill her mother's vision, Loretta Afraid of Bear Cook continues to work with many Native activists who are dedicated to the Black Hills return initiative. They are committed to putting the issue in front of President Obama before he leaves office.

Shortly after Grandmother Beatrice's death, Loretta Afraid of Bear took her mother's place with a group of representatives and scholars in the Long March to Rome. There they met with Pope Francis and had an audience with the Holy See. "We spent the day sitting at the table with them," she says, "and we presented a united front. We learned that they all had not read the papal bulls. Steve Newcomb [of Indian Country Today Media Network], who had done the research and could speak Latin, asked, 'Do you realize the governments of the world are governing based on those edicts?' And they said no."

Loretta Afraid of Bear calls for the recognition that it is now time for both sides to be candid and speak truthfully. And for Native peoples to state: "This is how we would like to see things happen." "Everybody talks about reconciliation, but I have a hard time with the word because it implies that we have some kind of relationship with each other, and we've never had that. Our audience with the Pope was on May 4. The main bull we'd like to have thrown out, the Inter caetera, was signed on May 4, 1493. I told him, 'My people have been suffering for 523 years. I ask you to rescind the papal bulls that affect us.' They agreed. I came away feeling hopeful, like we've made a difference."

She describes the nature of women's involvement in her tribe's sociospiritual structure. "In our creation stories, the Great Vibration in the universe had conversations with the power Woope or Wohpe—Mother Law. Another feminine spirit is the White Buffalo Calf Woman, who brought us the seven sacred rites of our people. The teachings are profoundly feminine. There is no doubt in anybody's mind that when our Grandmothers say something, it's Mother Law speaking."

Grandmothers
Update Required To play the media you will need to either update your browser to a recent version or update your Flash plugin.

In honor of the late Grandmother Beatrice Long Visitor Holy Dance, the Grandmothers will reconvene once more at Menla in Phoenicia to celebrate the completion of their circle of prayer around the planet. A three-day healing retreat, "Creation to Completion," will be conducted August 25-28, when Loretta Afraid of Bear joins 11 of the original Grandmothers in a ceremony of gratitude. The public is invited to be a part of this gathering. Contact Lynn Schauwecker at lynnschau@gmail.com or visit Menla.us for registration information. And look for the 2017 publication of a book documenting the Grandmothers, with photographs and text by Marisol Villanueva.