Could Your Pelvic Floor Use a Renovation? | Health | Hudson Valley | Chronogram Magazine

Could Your Pelvic Floor Use a Renovation? 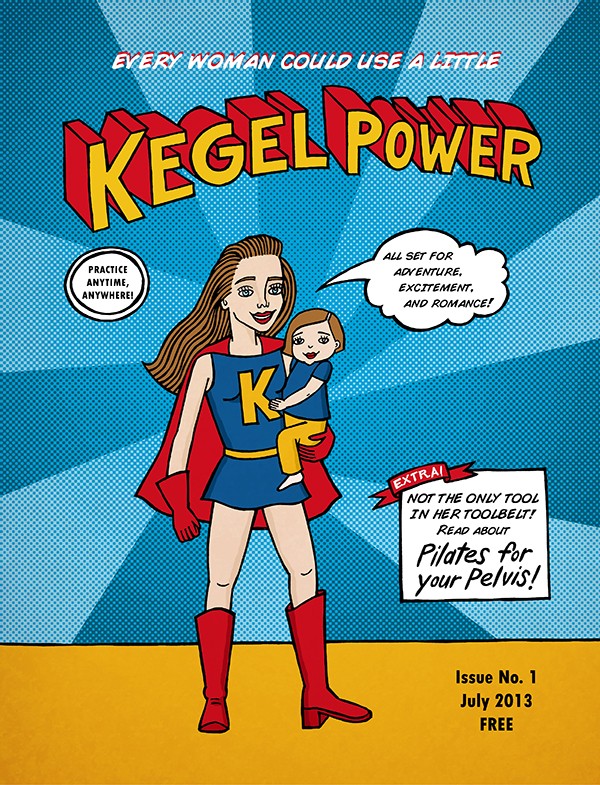 There's a place in our own bodies where only the brave will go. It's shrouded in taboo, myth, misinformation, and no small measure of bashfulness and red-faced humor. It's hard to locate; to find it requires a headlamp and compass, or better, GPS. It's hard to talk about; euphemisms and evasive descriptions tiptoe around the subject. If there's a malfunction in this area, someone might tend to "spritz" or "leak." There might be "a kink in the garden hose." Some feel that even statements like these are too revealing, preferring to fall back on the conveniently nondescript "I have a problem...you know...down there."

This mystery destination is the pelvic floor—the complex bowl of musculature holding the genitals, organs of elimination, and abdomen in one carefully balanced package. If the area had a job description, it would be the primary foundation for our torso—the diamond-shaped hammock upon which the upper half of our bodies rest. Important? Yes, and also susceptible to health issues that can undermine its vital, supportive functions. In these hinterlands of the flesh, more can go wrong for women than for men. Pregnancy and childbirth can put tremendous pressures on pelvic floor muscles, ligaments, and fascia (connective tissue)—and even for women who never carried babies, the area is vulnerable particularly after the hormone changes of perimenopause. Men are not guaranteed a problem-free pelvic floor either—a host of assaults from cycling to prostate surgery can damage the area. Finding a therapy to help can feel as lucky as spotting a bald eagle. But experts ranging from a physician to a physical therapist and Pilates instructor are coming out of the Hudson Valley woods with surprisingly effective programs designed to restore order in the most unmentionable of places.

Seat of a Problem
Karen James at 64 had a healthy sex life and was entirely continent until a problematic surgery to fix a rectal prolapse left her in terrible pain and constant leakage months after the recovery. "I had pain with intercourse and I was urinating maybe 20 times a day and three or four times at night, so I was up all night, I couldn't sleep," says James (not her real name), of Kingston. "I was crying a lot about it and depressed. My whole life had changed." While the surgeon's office in Albany couldn't do much for her, James found that her OBGYN practice, Mid Hudson Medical Group in Rhinebeck, had a new doctor in the group—a hard-to-find urogynecologist, one of just a handful in the Valley—named Stephen Young, MD. "He was wonderful. I kept telling people there was something wrong, and he was the only one who would listen to me. He said, 'You've got to have some help here.'" During an exam, Young found that James had a bladder prolapse that had gone undetected (the bladder was bulging into a weakened part of the vaginal wall). Although Young could have fixed the problem with another operation, James opted instead to be fitted with a pessary, a device inserted in the vagina to provide structural support. "Almost immediately, I felt better," she says of this first step in her healing journey.

"A huge number of women suffer in silence from urinary incontinence or prolapse [bulges]," says Young, who built a program in urogynecology in Worcester, Massachusetts, for two decades before "retiring" two years ago to the Hudson Valley, where he sees or operates on patients three days a week. "For women 45 and older, the statistic is one in three who have urinary incontinence, prolapse, or both. One in eight has anal incontinence. A family doctor might say, 'It's a normal part of aging and you just have to live with it.' The truth is, it's not normal and you don't have to live with it." Young puts the cure rate for both incontinence and prolapse at about 85 percent. His specialty is vaginal reconstructive surgery—a minimally invasive, natural-orifice surgery that requires no abdominal incision. Unfortunately, there isn't enough training in this kind of medicine, but Young had the opportunity to apprentice in the 1980s at Brown University with a famous physician who had written the textbooks for vaginal surgery. "All I do is fix vaginas," Young says. What he doesn't do is so-called vaginal rejuvenation surgery or other vanity procedures ("You can't get back your 18-year-old vagina," he says). What he does do is repair the structural-related incontinence and prolapses that plague so many women. "I've only been with Mid Hudson since last August, and I'm mobbed."

Pelvic Friend: The Kegel
While in some cases surgery is appropriate and necessary, in others it's a last resort; not everyone wants to go under the knife. James, for one, felt she would do anything to avoid it—but since the pessary could not solve all of her problems, Young recommended that she see Cathy Leonard, manager of physical therapy and wellness at Northern Dutchess Hospital in Rhinebeck. Like Young, Leonard is an unusual find: She's a PT with additional education and training that gives her specialized skills in women's health and in pelvic floor wellness for both men and women. With a noninvasive approach that uses bodywork and manual therapy, she offers an alternative program to drugs or surgery that is in many cases equally effective, and side-effect free. "Even if someone does need intervention, this approach will benefit people because it will make their surgical outcome better," says Leonard. "You're already addressing some of the musculoskeletal issues that need to be working at their best if you're going to have a successful outcome."

Most women of childbearing age and older have heard of kegels—the internal exercises that involve repeated contraction and relaxation of the muscles of the pelvic floor. We have the late American gynecologist Arnold Kegel to thank for these low-level, squeeze-and-release workouts; Kegel created them in the 1940s as a nonsurgical approach to treating vaginal relaxation. Today they're a first-line defense against genital prolapse and urinary stress incontinence (i.e., leakage that occurs with jarring movements like coughing, jumping, or lifting). Dreaded by some, championed by others, kegels are the pelvic equivalent of flossing—something most women know they should do, yet often guiltily do not do. "Everybody is told, oh, just do your kegels and you'll be fine," says Leonard. "But I would say the majority of patients who come in to see me are doing them incorrectly." Common mistakes include holding the breath and failing to isolate and engage the right muscles. (Note to the misinformed: Squeezing the buttocks, belly, and facial muscles does not a proper kegel make.) First Leonard corrects these problems with coaching and often with biofeedback, which involves hooking up a patient's pelvic floor muscles to a computer so they can "see" the kegel onscreen. Then she'll put the patient on an exercise regimen that includes several types of kegels, such as the fast, pulsing kind and the slow, long-hold variety.

While kegels are a mainstay of any pelvic health program, they're not the only tool in the tool belt. For patients who have urge incontinence—which is caused by an overactive bladder rather than a weak urethra—Leonard addresses the problem with behavior modification exercises. For patients like James who experience pain during intercourse, Leonard performs manual therapy either directly or indirectly depending on what the patient can tolerate. "She stimulates the area until it eases up on the tightness, and she shows you how to relax the muscles," says James. "I was in bad shape when I came to her, and my pain has improved by about 80 percent. I am so pleased. It's pretty remarkable."

Pilates for Your Pelvis
At a local yoga studio one weekend, an instructor prompts her students to lift their pelvic floor and engage mula bandha (root lock), the yogic equivalent of a kegel. "Can you find it?" she asks. "Get out your flashlights!" With their attention on pelvic floor muscles, activities like yoga and Pilates can be a great way to build awareness and prevent problems in this entry-level area. "I tend to work with everybody on the pelvic floor," says Holland-born and Newburgh-based Pilates instructor Martina Enschede. "It's such a tabooish area, but people are so happy that they can actually talk about it and work on it." A key goal of this physical fitness system, which was developed by German bodyworker Joseph Pilates in the early 20th century, is to strengthen the "core" or "powerhouse," which includes the pelvic floor as well as the deep muscles of the abdomen and low back.

"All of these are stabilizers of the spine," says Enschede, who works one-on-one with clients throughout the Valley and who is teaching a Pelvic Floor Workshop at Euphoria Yoga in Woodstock on July 13. "The pelvic floor has a greater context—the whole body. Some 36 muscles attach to it, so when something goes wrong here, it travels up the chain—and vice versa." Since for many people the region is elusive, Enschede takes a multipronged approach. Step one is to have proper awareness, so she starts with imagery, showing her students an anatomical model of the pelvic floor. What emerges is a diamond shape with the pubic bone at the tip of the front triangle, the coccyx (tailbone) at the tip of the back triangle, and the ischial tuberosities (sit bones) forming the two wider meeting points in between. Finding these landmarks in their own bodies, students have a point of reference from which to build awareness of the region in daily life. Next comes a lesson in posture, where it becomes clear that slouching increases interabdominal pressure that can weaken the pelvic floor. Ultimately, Pilates exercises such as pelvic bridges (lying on the back with the knees bent and the pelvis lifted) help to target the region and strengthen it.

Bonus Prize: Better Sex
Even subtle improvements to the pelvic floor can bring tremendous quality-of-life changes, from baseline health to some unexpected benefits in the bedroom. "When you strengthen these muscles, guess what? You get a better sex life," says Leonard. Kegels for men not only help with continence issues but also can increase the size and intensity of erections—and pelvic floor vitality can give both sexes more pleasure with intercourse. "I had a male patient who was very happy about that," adds Leonard, who is expanding her much-needed physical therapy program to a second facility opening at Vassar Brothers Medical Center in Poughkeepsie (though she will continue treating patients in Rhinebeck). "We've created this safe, warm environment where you don't feel like people are pointing fingers at you. Even with their difficult diagnoses, I often get comments from patients that it just feels good to come here."

How to Incorporate Cannabis into Your Everyday Wellness Routine Sponsored