It fast became the province of directionless noodlers, but at its beginning jazz-rock fusion (or simply fusion) was a bold and truly forward-thinking form; one that saw young jazzers break with tradition by drawing inspiration from psychedelic rock to create some of modern music’s wildest and most inspired sounds. And guitarist Larry Coryell, who will perform at the Rosendale Café on January 29 and the Ritz Theater in Newburgh on January 30, was right at the forefront. In fact, through his mid-’60s tenure with pioneering proto-jazz-rock outfit the Free Spirits many see Coryell as the man who kicked off the whole shebang.

“That’s really nice that people say that but I don’t agree,” says Coryell on the phone from his Florida home. “I mean, the whole jazz-rock thing happened organically and I wasn’t the only one doing it. [Younger jazz players] were just products of our time. We wanted to make music that was relevant, and at that time we really believed that what was going on in rock—the Beatles, the Stones, Dylan—was more relevant than a lot of the jazz stuff we had started out playing.”

Coryell was born in Texas and grew up in Washington, where he studied guitar and fell under the spell of master players Barney Kessel, Johnny Smith, and Tal Farlow. He headed east to New York in 1965, where he formed the unheralded Free Spirits, for whom he also sang, and made his recording debut on drummer Chico Hamilton’s 1966 album, The Dealer. From there he hooked up with vibraphonist Gary Burton to form Burton’s groundbreaking quartet. “It was pretty radical stuff for a lot of audiences,” Coryell recalls. “We got booed at some of the festivals we played.”

After waxing some searing duets with fellow guitar genius Sonny Sharrock for Herbie Mann’s 1968 Memphis Underground LP, Coryell formed Foreplay with pianist Mike Mandel and saxophonist Steve Marcus, a group that later mutated into the quintet Eleventh House. Between bands, he cut some stunning solo LPs, including Barefoot Boy and Live at the Village Gate (both 1971), and later recorded with Charles Mingus, Sonny Rollins, and other greats. Although he’s always flitted between, much of Coryell’s more recent output has seen him shying away from singing and concentrating more on his intricate acoustic playing.

Coryell’s newest release, the live Earthquake at the Avalon (2009, Inakustic Records), however, marks a return to his heavy, Hendrixian days of yore, and even finds him stepping up to the mike once again. The disc includes ace drummer Bernard “Pretty” Purdie and the guitarist’s son Julian Coryell on guitar, voice, and keyboards (his other son is local blues rocker Murali Coryell), plus a guest appearance by Los Lobos guitarist David Hidalgo. But it’s the intimate solo acoustic mode that area listeners will be treated to for the two dates this month. “I usually do at least one Gershwin tune for these kinds of gigs,” says Coryell. “Probably also Ravel’s Bolero, ‘Spain’ by Chick Corea. I might even try [John Coltrane’s] ‘Giant Steps’—hopefully, I won’t fuck it up!”
Highly doubtful, Mr. Coryell. Highly doubtful. 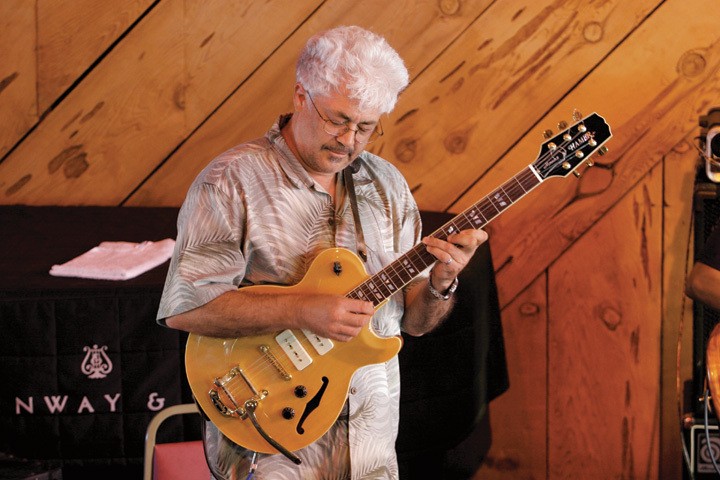