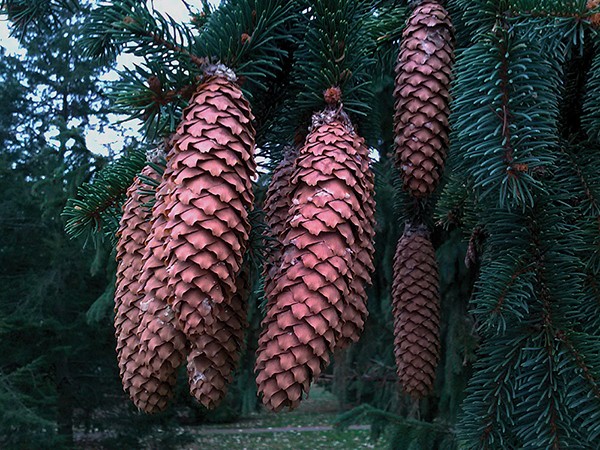 To Be a Conifer

My new neighbor came over the other day to ask what was wrong with his pine trees. "They lost so many needles last fall!" This is a call that lights up Master Gardener hotlines everywhere. Be assured that pines customarily lose some of their needles each fall to make way for new needles the following spring.

The amount of pine needle "drop" depends on the species. The eastern white pines (Pinus strobus) so common in the Hudson Valley hold their needles for three years. So even though they are "evergreen," they behave deciduously in part, with their second- and third-year needles coloring up yellow and falling each autumn. If you think about walking in piney woods, there's that wonderful soft layer of needles below your feet, thanks to the annual pine needle drop of a portion of the trees' leaves. (By the way, it's legitimate to refer to the needles as "leaves"—botanically speaking, needles are a kind of leaf...and natural pine needle mulch is a boon and should never be raked away!)

Pines are a type of conifer—"conifer" is Latin for "cone-bearing." Other types of conifers besides pines include spruces, firs, cypresses, hemlocks, junipers, arborvitae, and yews. Conifers are gymnosperms—a word derived from the Greek for "naked seed." If you've ever shaken a pinecone, you may have seen the seeds fly right out, because they're naked. They're not protected in a fleshy ovary structure the way that the seeds of apples and thousands of other angiosperms (meaning "enclosed seeds") are.

Interestingly, conifers are not always evergreen—take your Eastern larches, your bald cypresses, and your dawn redwoods, for instance. They bear cones, but they lose all their leaves every fall. They are deciduous conifers. How many of them were cut down in the winter because they were presumed dead? One shudders to think.

Evergreen coniferous trees and shrubs enhance our Hudson Valley landscapes and home gardens by providing color, texture, and garden structure year-round. Many of them also make stalwart hedges and windbreaks when massed. They are so varied and beautiful, it is easy to want to collect them. This is especially true of the dwarf conifers that at the nursery stage are so adorable, they trigger powerful nurturing feelings usually reserved for babies and puppies. Lovely collections of conifers can be seen at the Orange County Arboretum in Montgomery, the Mountain Top Arboretum in Tannersville, and Stone Crop Gardens in Cold Spring.

Keith Buesing is well known in the Hudson Valley for Keith Buesing Topiary Design and Coral Acres Landscaping (Keithbuesing.com). "I love conifers," he says. "There's a warmth about them, maybe because they are evergreen and have a shaggy or furry appearance. I admire the range of colors and textures and forms that add so much interest to the garden. I love that when the buds open in the spring, the brand-new growth is always a lighter, brighter version of the plant's normal color, before the needles slowly transition to their mature color."

Buesing says he enjoys everything from the soft and deep green fans of Hinoki cypress (Chamaecyparis obtusa 'Nana Gracilis') to the spiky, powder blue needles of Hoops blue spruce (Picea pungens 'Hoopsii') to the mop-like, bright yellow foliage of gold thread cypress (Chamaecyparis pisifera 'Filifera Aurea'). He really likes the form and color of the weeping blue atlas cedar (Cedrus atlantica 'Glauca'). "No two are alike and given the room to spread out, they can become crazy, magnificent specimens," he says.

Buesing also likes the biggest arborvitae in the trade (Thuja 'Green Giant'), especially for hedging. "They're tough, super-fast growing, and when they get to the desired height and width, they trim really nicely, making a very thick and solid wall." Among lesser-known conifers, one of his favorites is the Skylands spruce (Picea orientalis 'Skylands'), a bright yellow, upright, slow-growing specimen.

Buesing says, "The span of conifer growth rates is amazing, from miniatures that grow less than an inch a year to others that can gain three feet a year. And their oils are so fragrant! Such a bonus when trimming them, which is something they take to very well."

Catskill Native Nursery's Diane Greenberg specializes in ecological landscaping  and property consultations (Catskillnativenursery.com). She points out two conifers that she thinks are underutilized. First, she recommends clients use white spruce (Picea glauca) more, because Colorado blue spruce (Picea pungens) continues to decline in the Hudson Valley due to disease pressure and greater fluctuations in winter temperatures. "White spruce is hardier all around and makes a good substitute," she says.

Second, Greenberg says that while many people are familiar with junipers, they often are not familiar with the native common juniper (Juniperus communis). "Despite its humble name, it comes in a wide variety of shapes and colors and is very versatile in the landscape," she says.

Greenberg says that common juniper is available as a small tree, bush, or a low-spreading shrub. Its dense, prickly needles can range in color from a deep silvery blue to a predominant gold tone.

Catskill Native Nursery has used common juniper as a stand-alone ornamental, grouped into a grove, as part of a hedgerow, or even pruned into topiary. There are three specimens that they call "The Three Sisters" in their mountain display garden that greet people as they enter the nursery. "They are among the plants we are most often asked about," Greenberg says, "because people don't recognize them as junipers. We highly recommend local gardeners get to know this flexible, valuable species better."

Common junipers can be either male or female; the female produces a pretty blue, spherical seed cone that is referred to as a juniper "berry" even though it's a cone, botanically speaking.

Greenberg says, "This berry has traditionally been used as a seasoning in cooking and to flavor gin. The berry is also an important winter food for non-migrating birds, while the plant itself offers shelter to birds from winter winds and predators. Common juniper is highly adaptable and can thrive in all types of conditions, from dry and alkaline to marshy and acid. Full sun is ideal but it will tolerate light shade. Because it comes in so many forms, and adapts to so many conditions, it can easily be added to most gardens."

Conifer: Cone-bearing gymnosperm trees and shrubs; most have evergreen needles, but some conifers, like larches, are deciduous.

Evergreen vs. Deciduous: Evergreens retain their leaves year-round, while deciduous plants shed their leaves in the fall.

How Tourists Can Protect Endangered Species in the Hudson Valley