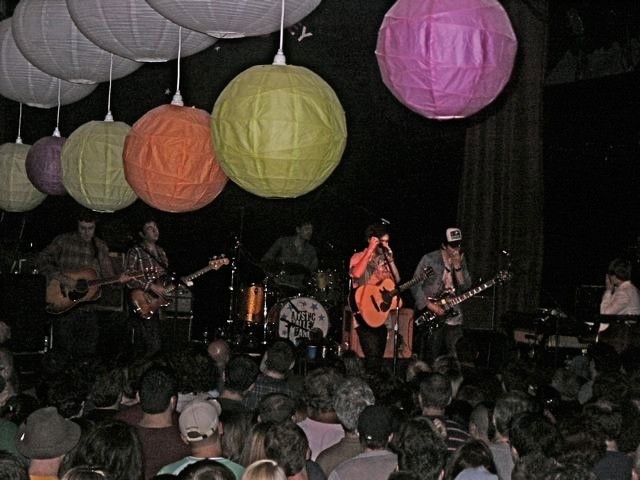 Conor Oberst and the Mystic Valley Band took to the stage at the intimate Bearsville Theater in Woodstock to a sold out crowd so tightly knit, it felt like the audience was ebbing and flowing on some Extra Terrestrial spaceship that had just landed for the sole purpose of reminding humanity to witness all of its multiplicity and forms before it vanished into some complex, ethereal vapor. Oberst sings of this existential vortex on his new albums, Conor Oberst and Outer South, (2008, 2009/Merge Records), where he and the extremely talented Mystic Valley Band are only eighteen tour dates short of finishing their crazy American domestic quest, exploring themes of nihilistically religious love, American exile, economic torpor, and modern political delusion.

The two albums range in style and emotional complexity – but they both draw from Oberst’s well known spare and emotionally exquisite lyrics. (One could teach Oberst’s “songs” in a poetry class, and students would never be bored by the heavy guitars combined with symbolic titles like “To All the Lights in the Windows.”)  On both albums, Oberst’s hard core/folk protest tradition is mixed with alt/country and some more mainstream but rhapsodically edgy and twangy summer rock songs like “Nikorette” and “Danny Callahan.”

Oberst and his cadre of gifted musical brothers proved there really is no one genre that can contain the forces of nature. Tickets were a mere $22 making the Indie show accessible to all, proving that Oberst is quite serious about bringing his band’s talents to those who are simply intelligent and passionate about music, without the high price tag of commercial vipers.

The night began for most fans outside by the rambling stream, with many overflowing into the Bearsville Theater’s Kyoto Temple-like garden grove of ancient trees; others drank in the clear night with buoyant relief after days of ceaseless rain, spilling out into the glass and wood open bar. There was a warm summer wind, and a glowing yellow moon that looked carved and clear and aching to be full. Once the music started, there was no room in the packed Zen-like barn illuminated by paper pink and orange Japanese lanterns, and Oberst opened the show with a tight rendition of “Sausalito,” (from the self-titled: Conor Oberst), a romantic and passionate recollection of heavenly love too fragile and beautiful for this world. “The kind of love that makes my back hurt, wearing nothing but a t-shirt…she’s turning over on a mattress made of air … I close my eyes, I see a staircase, leading upwards into blank space … all of creation makes a sound too soft to hear.” Meanwhile, heavy guitars wailed and the audience morphed into an immediate and bouncy responsive taught string.

Splayed like a four-pointed star across the stage for this song and others were the heavy, raw, and tight-like Creedence Clearwater Revival electric and acoustic guitars of Oberst, Hollingsworth, and Freitas, and the steep bass grooves of Macey Taylor. Off to the side, but of no less import, Nathaniel Walcott (piano/keyboard/organ) reared monstrously beautiful analog sounding keyboard and organ sounds reminiscent of Pink Floyd’s Richard Wright, or Ray Manzarek from The Doors. The music coming out of his corner on the stage was otherworldly, and recollected heavyweight seventies rock bands that altered the consciousness through reverberating sounds grounded in some parallel high octave alternate universe. Walcott’s eerie and ghostly multilayered keyboard and organ strands distilled Oberst’s soulful lyrics throughout the show with a psychedelic poignancy that cannot be described as anything other than “being in a man’s mind, with himself and the lonely phantoms of existence.” Walcott is an ornately refined dragon on the keys, holding back and letting go at all the right moments, and the sounds coming out of his corner on the Bearsville stage were wildly original and unprecedented, both retro and modern at once and highlighted in powerful songs such as “I Got The Reason #2,” (Outer South), where Oberst sings about the perils of religion, worldly reckoning, and the complexities of ambition and alienation.

At one point in the show, Oberst and Walcott played “Lenders in the Temple,” (Conor Oberst) with a simple acoustic guitar, spare mono-tunnel lighting, and Walcott’s linguistically fluent organ, as Oberst lamented, “There’s money lenders inside the temple. That circus tiger’s going to break your heart; something so wild turned into paper, if I loved you, well that’s my fault.” The eerie and totally original keyboard sounds combined with Oberst’s famously haunting verses echoed through the awestruck audience like a borrowed love that’s crossed the River Styx, complete with the self-aware ferryman of fearful death, a stillborn love murdered by a man’s own ego, corrupt society, regret, and time.