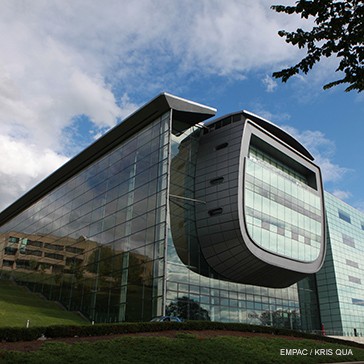 The Curtis R. Priem Experimental Media and Performing Arts Center—more commonly known as EMPAC—at Rensselaer Polytechnic Institute in Troy celebrated its 10th anniversary last year as the site of some of the most incredible events and exhibitions in the spheres of contemporary visual and sonic art, music, dance, theater, and performing arts. One such happening will take place there this Friday, February 22: “36 Loudspeakers for 2 Ears,” an inaugural concert of the new 36-channel Ambisonic speaker system inside its black box Studio 1 space.

Highlighting the 60-year history of electronic music composed for loudspeaker systems built around and above the audience and performed by Harvard University educator and composer Hans Tutschku, “36 Loudspeakers for 2 Ears” includes Karlheinz Stockhausen’s Gesang der Jünglinge; Edgar Varèse’s Poème électronique (famously performed in 1958 at the Brussels World’s Fair over hundreds of loudspeakers designed by the architect Le Corbusier and the composer/architect Iannis Xenakis); John Chowning’s Turenas, the very first computer-music work created with “the simulation of moving sound sources”; multichannel works by the Belgian composer Annette Vande Gorne and the British composers Jonathan Harvey and Jonty Harrison; and pieces by William Schottstaedt and Mark Applebaum.

Ponder this 1960s recording of the mind-scrambling Stockhausen piece, and consider how it will sound piping through EMPAC’s new 36-speaker system while you sit in its midst: