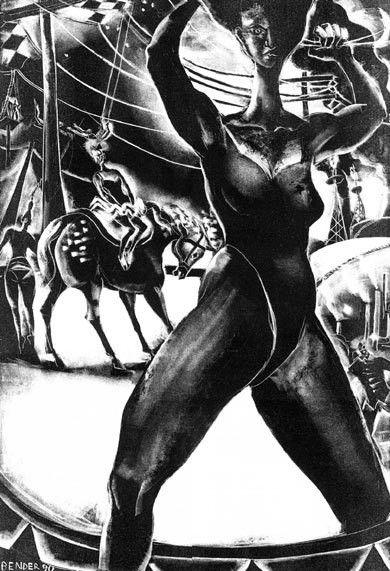 It never ceases to amaze me how integrated every-body’s life is. I don’t have to look any further than my own life to see how integrated every little piece of it is. One of the connections that keeps coming up for me is this—I’ve played a number of parts in my life. When I was on the stage, I played a lot of parts—Mercutio in “Romeo and Juliet,” Starbuck in “The Rainmaker”—lots of roles. One of my favorite parts was in a play by a Russian named Leonid Andreyev.

It finally comes out that he has the ability to speak philosophically, so they concoct an act. His role is to run out to the center of the ring and start telling the truth. Every once in a while, in the middle of his speech, a clown comes racing out from the side and whacks him with a stick. The act is called “He Who Gets Slapped.” As you might guess, this is also the name of the play.

It is a tremendous play, and I played the man in the top hat. It’s a part I’m still playing. In order to give you a small taste of the power of this play, of why I’m so impressed by it, let me quote this small passage from it:
“If I should gather from all the world all the goodly words that men have among them, tender speeches, sonorous songs, and loose them like a flock of birds into the joyous air; if I should gather all the smiles of children, the laughter of women whom none have yet wronged, the caresses of gray-haired mothers, the hard hand-clasp of a friend, and fashion all these into an incorruptible wreath for some splendidly beautiful head; if I should go all the earth over and gather all the flowers, whichsoever there are on this earth in the forests, in the fields and meadows, in the gardens of rich men, in the depths of the waters on the blue bottom of the ocean; if I should gather all the precious glittering stones, if I should unearth them in impassable ravines, in the darkness of deep mines, pluck them out of kings’ crowns and the ear lobes of rich women and pile all these, both stones and flowers in one glittering hill; if I should gather all the fires, whichsoever ones there are burning in all creation, all lights, all rays, all flare-ups, explosions, soft radiances, and with the glow of a single great conflagration illumine the universes as they shudder, yea, even then I still would not name Thee, would not crown, would not glorify Thee fitly—FREEDOM!”

The nature of all spiritual traditions is to arrive at the place this great-souled Russian describes—freedom, inner freedom. And in order to arrive at this place, it’s necessary to change. The glue holding you together as you are, keeping you in a peculiar sort of bondage, has to go.

You have to begin to distrust the glue that holds us in place—it’s made up of lies, self-deception, the false picture we have of ourselves. In order to reach the sort of freedom Andreyev is speaking of, it’s literally necessary to become unglued, to let the false stuff of our personalities decompose.

This is no easy task. The very thought of it makes some people nervous—if I become unglued, I’ll fall to pieces. There’ll be no hope for me. If I fall apart, I’ll have to put the pieces together again. Maybe I’ll shift them around a little, but basically, at least I’ll be safe. It’s funny. What we have trusted in has brought us to that state and then places us in a position where we can no longer trust that thing, and yet we decide the only thing we can trust is whatever that thing is. And at that point, it becomes possible to trust something else, something that’s higher.

This higher something has been given many names. Once you’re willing to surrender that trust in what’s false you can actually step through that “unglued” state and be made new, but not by you. The same you that made you what you are can’t make a new you, it can only make a duplicate of you, because it works on the same premises, the same ideas, and the same values.

If you can reach this point, you’ll lose all your old supports. You’ll feel uncomfortable, on shaky ground, unable to hold yourself up anymore. At this point, you’ll be in a position where this higher force, this higher power, whatever you want to call it, can lead you toward something new. You’ll find you can’t trust ideas or the way you’ve always imagined things to be. The only being you can trust is that very being that can lead you out of that dark place.

That being goes by many names in all the great traditions. You can call it the Creator if you like. To live in a way in which you trust that the Creator will care for you requires you to let go of everything else you trust in. You’ve got to recognize that anything productive and constructive in your life, anything that leads in a fertile direction has not come from you. You are being cared for at every moment, and all the care we think we’re giving ourselves is all misapprehension. If you trust in that moment and you give yourself to that moment, that force that could be called the Creative Force will take care of you no matter what.

The experience of this truth is just that—an experiential matter, not just an idea. You can only have this experience by placing your trust in this Creative Force. When you relinquish control of what keeps us in place, keeps us bound, this force can come in and lift us out of ourselves, care for us. You’ve got to do it in small things and see for yourself how it works in every moment. If you start to look deeper into your life, you’ll see that it’s happening all the time—there’s not a thing that you are doing that accounts for your existence, everything that’s happening is being cared for by a higher power.

The fact is, you’re existing in the midst of a miracle, and you’ve got to begin to see that, you have nothing to do with it, you can’t do a damn thing about it, you either trust it and continue or you don’t. It can only happen if you get out of the way and let your life be. That’s how you move from the intellectual to the experiential, from the idea of freedom to its actuality.

It may sound nuts, but it’s not nuts. Slap me if you like, but until we start to trust that higher power and rid ourselves of our useless, paralyzing ideas, we’ll never have any freedom at all.