Coming-of-Age Rituals in the Hudson Valley

From Time-Honored to Homespun

Bookstores are crammed with so-called "expert advice" on discipline, sleep, education, diet, etc. Guidance on the act of letting go, however, is far less common. Yet every parent realizes this is a bittersweet aspect of the job, and wants to get it right. Kids recognize it too, as their bodies and minds change, and the world beckons. Whether religious or secular, parents want their kids prepared for independence, imbued with confidence and a sense of belonging to a community that does good work. Many mothers and fathers, in fact, need preparation themselves, plus a sense of agency over the changing energy dynamic in their homes. Ritualized coming-of-age ceremonies address these crucial transitions, and while some families adhere to age-old traditions, an increasing number of Hudson Valley residents are turning to novel ways to embrace the changes, via rites both time honored and homespun. Whether meticulously planned or freewheeling, all help children connect to their strengths, their communities, and their families.

Kindling a Flame
Kayti Lathrop, a world traveler with roots in the Hudson Valley, is a mother of five. She grew up Episcopalian, while her husband, Sean, was raised Catholic. Neither accepted their parents' faith, but both are impressively conversant in various philosophies, especially the teachings of Jesus, whom they see as "someone living very closely to the earth." When their eldest, Kaya, was nearing seven, Kayti devised a Native American-inspired Seventh Year Ceremony as a rite of passage from one phase of childhood to another. "Kaya was looking outside our family," Kayti says, "thinking in different ways. She was capable of more responsibility. We wanted to honor that, and because, as a family, we're inspired by the natural world, I based the ceremony around that." As part of the preparation, Kaya spent a month creating a sacred rock circle on the mountain behind their house. She learned to use a flint, and on the day of the ceremony, she created a fire in the center. Guests sat and individually told her what they'd learned from her, then gave her a homemade gift. "I couldn't believe she sat still for so long," Kayti says, laughing. "We gave her permission to grow up a bit. Afterward, she took more initiative, had more confidence. As a mother, I felt like I'd remembered something from another life."

Connecting with History
Just as the natural world inspired the Lathrops' Seventh Year Ceremony, a supportive, spiritually nurturing community can smooth over a parent's negative religious memories and awaken a desire for belonging. "My parents were observant," says Woodstock's Abbe Aronson, "but they got no joy from their synagogue, and neither did I." Abbe was not planning to have her son Alexander Bar Mitzvah'ed until she met Rabbi Jonathan Kligler of the Woodstock Jewish Congregation, where friends had gathered to mourn the death of one of Alexander's friends. That changed everything. "We were blown away by Rabbi Jonathan's ability to help a devastated family, and by the solace he provided the entire community."

Alexander, who chose to be Bar Mitzvah'ed in part because of his appetite for knowledge, says, "You spend all these years learning the prayers and songs and why they're important. And when you're Bar Mitvah'ed, you're being let into this group of people, this history." According to Abbe, "Alexander's Hebrew school was funkadelic fantastic compared to mine." 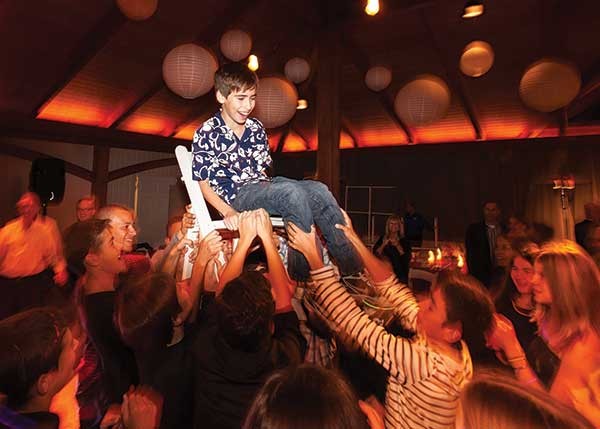 Protection in the Sacraments
An absence of religion can also motivate a parent. As a lonely child in El Salvador, Sonia Vega, of Saugerties, longed for the Catholic experience. Although she was baptized, she says, "My parents didn't like to leave the house, and the closest Catholic Church was 30 miles away, so I did not receive my sacraments. I never saw my godparents. I didn't want that for my kids. So when I got pregnant, I took my sacraments." Needless to say, her son Albert, now 12, received First Communion at seven and was recently Confirmed at St. Peter's Church in Kingston, where Sonia teaches Confirmation class. "St. Peter's does Confirmation earlier than usual," Sonia says, "because middle school can be so rough, and they want the kids prepared."

Sure enough, Confirmation, which follows a study of Jesus and the saints, gave Albert a strong sense of identity, confidence, and strength, in both middle school and life. "It makes me feel protected," he says, nodding, dark eyes clear and calm. To his surprise, since the ceremony, Spanish-speaking parishioners often ask him to translate text.

A Different Kind of Connectivity
Preparing adolescents for life challenges is a goal of Konrad Ryushin Marchaj, Abbot of Mt. Tremper's Zen Mountain Monastery (ZMM). Although Buddhism offers nothing official, Ryushin oversees an optional coming-of-age rite for participants in the monastery's Zen Teens program. The three-month preparation includes public service and interviewing family elders for insight into one's ancestral inheritance. "We acknowledge the teens in their challenges," he says. "We trust the Buddhist tradition of the investigative mind. Kids and teachers recognize the hyper-connectivity of the Internet-based culture, but they also feel the value of embodied connectedness, environmental connectedness."

Katie Scott-Childress was a lapsed Catholic-turned-Buddhist mother of two when she chose ZMM as her spiritual community. The Zen Kids and Zen Teens programs in particular appealed to her. Her daughter Lillian, now a Yale-bound senior at Kingston High School, participated in Zen Teens and chose to prepare for a Coming-of-age ceremony. "One of the real values of coming of age," Katie says, "was Lillian having adult mentors and relationships outside of her parents and schoolteachers. They created a community where she could explore her identity in a way academic or family environments don't allow."

In the final ceremony, Lillian committed to the Buddhist precepts before the sangha (congregation). The intensity surprised her. "I didn't feel any different until the end," she says, "but the ceremony compounded everything I'd learned and experienced. It was powerful. Afterwards, I felt really grateful for my community, for the monastery, and I felt more reverence for my parents."

Everything Is Connected
Gratitude. Reverence. A sense of belonging, a deepening of personal strength through bonding to the natural world and to ancient, still-potent stories; more than anything else, a coming of age ceremony, whether alternative or traditional, offers families a way to navigate turbulent waters with grace. Parent and child head in different directions, yet the ritualized activity brings them close, on a plane where, despite time and distance, everything is connected.