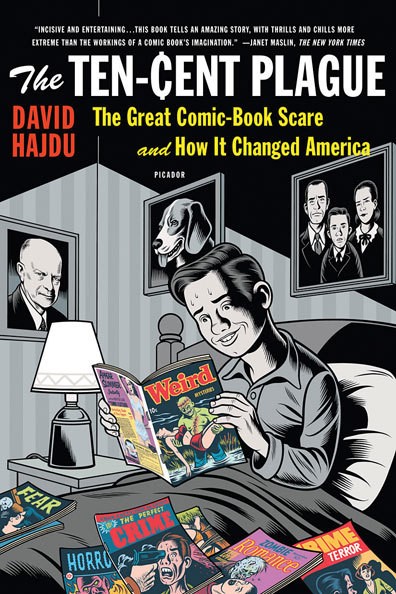 The Communist witch hunts offer a vivid cautionary tale of patriotism and morality run amok, but few people recall this sorry episode had an equally insidious precursor: In the mid 1940s, politicians and religious leaders—and a savvy, self-promoting psychiatrist named Fredric Wertham—branded comic books as the gravest threat to the American moral fiber, a blight that had to be wiped out. They nearly succeeded. What followed was a round of public book burnings across the nation, promulgated by the same flag-wavers who had denounced Nazi bonfires a decade earlier. More than a hundred municipal laws were enacted against the most violent content in comic books. The result was a round of arrests for newsstand dealers. The greatest censure was reserved for comic book artists, writers, and publishers, most of them the sons and daughters of Jewish immigrants. A series of congressional hearings led to bankrupt businesses and shattered lives.

This surreal chapter in 20th-century American life is exhumed vividly and exhaustively by former Saugerties resident David Hajdu in the critically lauded The Ten-Cent Plague: The Great Comic-Book Scare and How it Changed America (Farrar, Straus and Giroux, 2008). For six years, Hajdu obsessively chased down legal documents, media evidence and surviving players in what he identifies as “the first battle of the cultural wars.” In exacting, lively prose, cultural historian Hajdu—a professor in the Graduate School of Journalism at Columbia University—recreates the era and its hysteria, as well as its cast of characters, with the same fetish for detail which distinguished his previous works: Lush Life: A Biography of Billy Strayhorn and Positively 4th Street: The Lives and Times of Joan Baez, Bob Dylan, Mimi Baez Farina, and Richard Farina.

Hajdu will read and sign The Ten-Cent Plague upstairs at Joshua’s Cafe in Woodstock on April 4 at 4pm. Sponsored by The Golden Notebook. (845) 679-8000.


David Hajdu: I used to live in Saugerties, so it’s kind of coming home to do this event, so I’m particularly excited about it. Full-time, Saugerties was my life for only about three years, but I happened to be working on this book the whole time. I did the bulk of the work on this book there, from 2001 to 2004. And before that, my wife and kids, we had a second home there. And what happened was that we realized we were idiots, and could not afford a second home. I don’t know what we were thinking, so – we moved up there full-time. Loved it there; it’s really very nice.

Jay Blotcher: Did your surroundings play a role in the writing?
I had a big old red farmhouse, right on the road on Old Route 32 in Saugerties. I had a little cottage behind the house that I rebuilt as a little writing studio. I got up every morning, drove down to the Hess station, got my coffee and the paper, and then drove back, so I simulated a commute. I looked out and there were deer and sometimes bears behind our house. That atmosphere – kind of warm, bucolic, peaceful atmosphere -- really put me in a state of mind to have some clarity of thought to do this book. It was very important.

Did you come to The Ten-Cent Plague as much as a comic book fan as a journalist?
I’d make a distinction between a fan and a fan boy. The fist things I ever had published were illustrations; when I was a kid, I did cartooning. When I was in high school, I did illustrations for my hometown paper. I was raised in New Jersey. So I always drew and I always loved comics. But I wasn’t a completist or a collector by today’s standards. I wasn’t concerned if Issue No. 233 was missing of a run of a comic. But I loved the stories, so I really cared about comics; I always took them seriously. I have never felt that I was a part of the culture of comic book buffs; I don’t feel that when I go to a comic book store, and those guys were all talking about the current continuity in Marvel [Comics], I don’t really get that.

But I think that helped when I was doing this book, because the book is about a very different time when comics had a different kind of meaning. Everybody loved comics; comics didn’t appeal to an elite, as they do now. Comics weren’t an object of connoisseurship that they are now. The comics told great stories that touched everybody. This [book] is writing about a time were the most popular form of entertainment in the country.