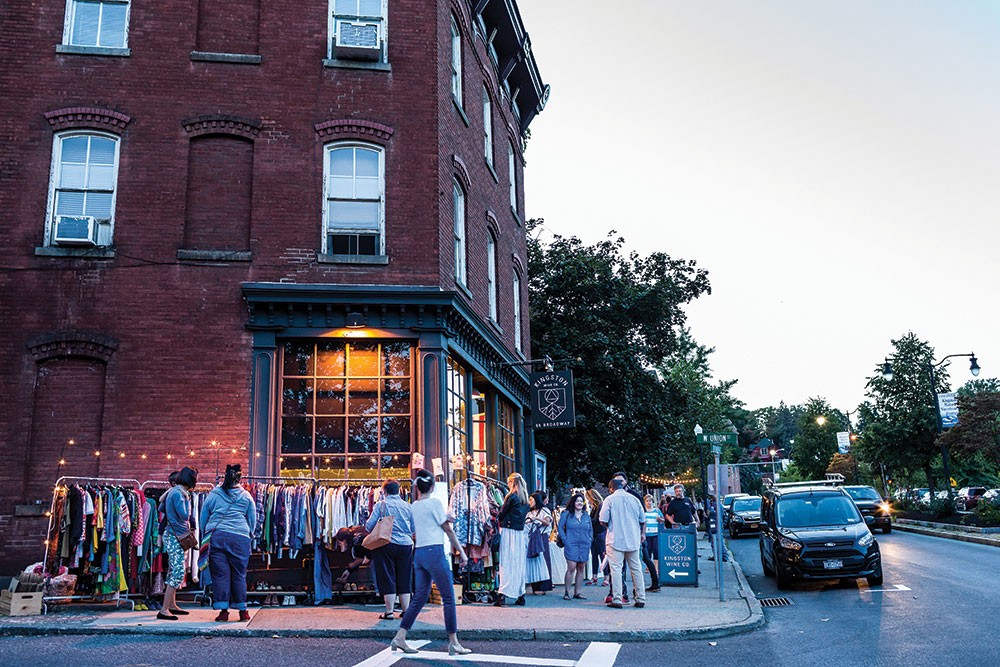 In the early 2000s, there was much talk of Kingston, New York, becoming—please forgive this usage of perhaps the most loathsome marketing phrase of our generation—"the new Brooklyn," with the city's Uptown neighborhood serving as its nexus. And, back then, after years of decrepitude brought on by the manufacturing exodus that swept America in the 1980s and the departure of the local IBM plant in 1995, it appeared that a renewal was taking place. Here and there on Front and Wall Streets in Uptown's Stockade district, lights were going on in the once-vacant shops. The missing teeth of Kingston's cracked smile were being filled in with the odd, life-giving boutique, cafe, or gallery. But it didn't take long for landlords to jump the gun. Getting greedy when they sensed gold in them thar ol' buildin's, they upped their rents to not-yet-sustainable levels, forcing out promising businesses and residential tenants. And then, of course, the Great Recession hit, smothering most of the remaining embers. Kingston's rebirth looked about as dead as a daisy in December.

Nearly a decade later, however, and the Kingston renaissance is here. This time for real, it seems. October's returning 0+ Festival and other nationally publicized events and newly added attractions have helped to bring attention to the town, and a wave of arts- and small business-encouraging economic incentive programs, far-sighted investors, and a recent rush of activity by forward-thinking entrepreneurs are increasingly coming together to rekindle Kingston's dormant flame.

Founded in 1651 by Dutch settlers, who called the outpost Esopus after one of the local Native American tribes, Kingston later became New York's first state capital. The burgeoning village was chosen as the site of the new state's government in 1777, when Albany, the intended center of leadership, was threatened by attack from British forces. Unfortunately, in October of that year the British invaded Kingston, burning much of it to the ground; today, however, many of the stone structures that escaped King George's torch, such as the 1676 Senate House, the original functioning capitol building, do still stand. (The city commemorates the attack every other year with a reenactment of the 1777 burning; the next such event is slated for October 2017.) In addition to playing an active role in the Revolutionary War and serving as a major commercial port into the 19th century, Kingston provided a majority of the bricks, bluestone, and cement used in the construction of New York City. Unlike its comparable Hudson Valley companions, Beacon and Hudson, the pulse of the Ulster County seat does not course along a single main street. Instead, Kingston's cultural and business life is divided among its three distinct districts—Uptown, Midtown, and the Rondout—which sometimes makes this city of 24,000 feel like three cities in one.

In the Middle of It All

Midtown has long been Kingston's diamond in the rough. The city's thriving economic heart for generations, it slid into blight in the 1970s when businesses began moving outward, toward the area's big-box/mall quadrant, the Town of Ulster. Within the last few years, though, thanks to city-backed arts and business incentives, life has been moving back into Midtown, whose spine, the four-lane Broadway corridor, connects Uptown to the Rondout. Situated at 601 Broadway is the Ulster Performing Arts Center (UPAC), a former movie and vaudeville house built in 1927. Saved from demolition in 1977, it was taken over by the directors of Poughkeepsie's Bardavon Theater in 2006 to present top acts in the fields of music, dance, comedy, and other entertainment, and continues as the district's anchor of renewal. Speaking of anchors, a few blocks up from UPAC is the Anchor, a music venue geared toward live rock 'n' roll, craft beers, and savory pub food. Around the corner, on St. James Street, is microbrewery Keegan Ales, which features live music and food as well. New and nearby are Peace Nation Cafe, which specializes in Latin American and vegetarian dishes for breakfast, lunch, and dinner; and PAKT Restaurant and Catering, which puts a health-conscious, locally sourced spin on traditional Southern cooking.