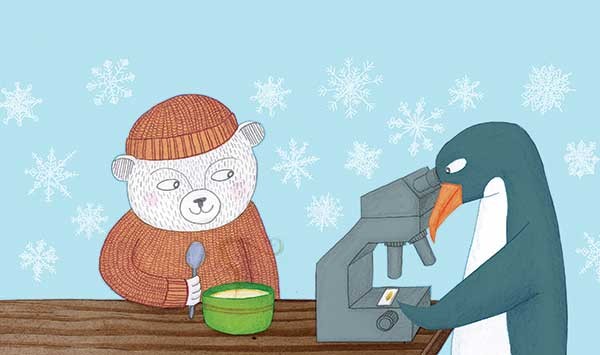 Break out the Kleenex: It's cold and flu time. For now, we might be stuck with the pesky viruses that were imported to the New World by European settlers. But whether or not we're stuck with the legends and folklore surrounding cold and flu season remains to be seen. With the help of experts, I've set out to debunk a few oft-repeated adages and centuries-old myths. It turns out that there's no simple answer in most cases—and that modern science's efforts to find a cure for the common cold are nothing to sneeze at.

Feed a cold, starve a fever.

The origin of this popular health axiom is unknown, but some trace it back to the 16th-century, when British lexicographer John Withals wrote, "Fasting is a great remedie of feuer." In those days, the prevailing wisdom dictated that you treat a cold by stoking the inner fires of the body with food, and conversely, that you cool a fever by cutting off your caloric fuel supply. In the same era that produced this thinking, bloodletting was considered a viable medical procedure. So is the saying pure folklore? Perhaps not. A small study conducted by Dutch scientists in 2002 found that eating a meal can actually boost the immune response that fights a cold virus, while reducing food intake can turn on the body's defenses against the bacterial infections that cause most fevers. Like many novelty studies, this one spawned a few cutesy, sound-bite news mentions but wasn't exactly considered High Science's final word on the subject.

A better rule of thumb might be "listen to your body," says Lauren Vigna, MD, a family care physician in Highland. "It's easier to pay attention to your body's natural signals when you have a cold or a flu," she says. "When you're well, you automatically eat meals because they're part of your schedule. But when you're at home sick in bed and you're off that routine, then you're forced to look inward and see, 'Do I need food, do I need liquid?'" Vigna acknowledges that the feed-starve adage does have an aura of truth to it. "When you have a fever you're probably not going to want to eat so much anyway," she says. "Your body's working harder to keep up its immunity, and digestion takes a back seat." Yet you'd be ill advised to take the dictate too far, justifying cold-turkey fasting for a fever, or worse, pigging out as a misguided antidote to a case of the sniffles. "There's no need to overeat when you have a cold. Eating normally is fine if you're tolerating it and have an appetite." Specifically, this is not the time to pack away the candy bars. "Sugar is a detriment to the immune system, so avoiding that when you're sick is pretty key," says Vigna.

Chicken soup is the best medicine.

If you think this adage dates back no further than your Jewish grandmother, think again. In the 12th century, Rabbi Moses Maimonides extolled the health virtues of chicken soup in his text "Medical Responsa." The piety of the dish—a Sabbath meal—might have had something to do with its elevated medicinal status. Yet other cultures have spun their variations on the therapeutic repast, including Greek avgolemono (thick egg, lemon, and chicken-broth soup). Aside from one small study conducted in 1978—in which sipping hot chicken soup was found to increase the velocity of nasal secretions in healthy subjects—science has been largely reticent on the effectiveness of Jewish Penicillin. But what does that matter? "It works for most people," says Vigna. "Soup in itself is nourishing, and chicken soup mixes fat and protein—necessary for cell reparation—with a good blend of nutrients." Naturally, increasing liquid consumption is crucial for rehydration when you're sick, and the combination of steam for a stuffy head and heat to soothe a sore throat can work wonders. Regardless of what your Yiddish bubbe might say, however, chicken is not the active ingredient here; beans or tofu will do just as well for the protein component. Not to be overlooked, though, is the healing power of receiving a warm meal fed to you by someone else—homemade, preferably, for the ultimate TLC.

To prevent a cold or flu, toke up on Echinacea or vitamin C.

Is Echinacea an immune-boosting wonder herb or an overhyped pseudo-cure? Depending on which studies you read, you'll find evidence for either classification. "I think it's effective in general," says Hillary Thing, an Accord-based herbalist and acupuncturist. "Some people have done meta-analyses of hundreds of studies, and the overall conclusion is that Echinacea is helpful in potentially preventing and also shortening the duration of viral and bacterial illnesses." Thing theorizes that the clinical trials have produced wildly different verdicts about the herb for a couple of reasons. One is that Echinacea might wage a powerful defense against certain strains of virus, but might be less effective against others. More important, she adds, "Sometimes the dosing is not high enough in studies that are dubious about Echinacea. This is a big point about using herbs: You want to take a lot of them, a high dose, for a short period of time." Thing recommends a dropperful (or half teaspoon) of Echinacea tincture every couple of hours at the onset of cold or flu symptoms. This way, the herb can inundate the system and stay active in the bloodstream. Happily, overdosing is not a worry with cold and flu herbs. "They're very safe and can be taken by all kinds of people, even if they're on other medications."