How many gallerists in the Hudson Valley built their gallery with their own hands? Chris Freeman spent the better part of three years meticulously crafting the Private Public Gallery in the shape of a large cube, with an adjoining project room. The building, in Hudson, was originally a synagogue, erected in 1865—the fifth oldest synagogue structure in the United States. The gallery stands where the altar once stood. Its current show, titled “I Remember… Remember?” is on display until February 3.

Chris Freeman is no ordinary builder. His house design firm is one of the foremost in Hudson. He’s also an artist, and sees with those double-bright eyes painters have. The way a TV series introduces its cast of characters in the first show, “I Remember…” reveals the characters who will be “stars” of this gallery. 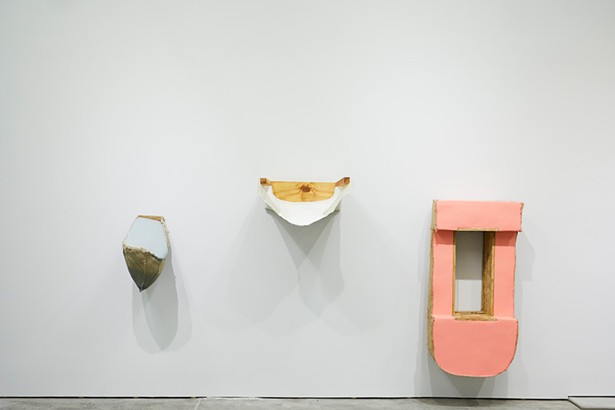 Major New York City galleries began closing during the 2008 recession; many never reopened. Of course, the pandemic hasn’t helped. Thus, a number of first-rate artists are without representation, which is where Freeman comes in.

Simultaneously, painters and sculptors have been drawn to the Hudson Valley, impressed by (comparatively) low rents and rolling hills. Most of the artists Freeman exhibits live in our area, with a few from Brooklyn, and one significant Long Islander: Howard Schwartzberg. The Abstract Room in London will co-curate Schwartzberg’s solo show in June, with Freeman. “They consider Howard to be our new genius in the art world,” Freeman remarks, and he agrees.

Schwartzberg is represented in the show by four pieces, all of which I would call “puzzling objects,” vaguely reminiscent of tribal artifacts. Incline Painting (Green Grey) is not a painting at all, but a burlap trough, roughly two feet long, overflowing with paint—or what looks like paint. (Apparently, it’s thickly painted foam.) You want to reach out and stop the paint from spilling, until you realize that’s absurd.

Untitled by Alexander Ross depicts a green plasticine substance, a bit like Silly String, tied into a complex knot. Moon, a painting by Todd Richmond, shows crisscrossing girders of the 59th Street Bridge, pink in sunset light, with a generous full moon behind.As for the title of the show, Freeman says: “When I was going to studios, looking at the work, I started to realize that these artists are using memory as a framework. I started to think, ’What does it mean to remember?’”

Private Public specializes in large-scale works, which is highly unusual in the Hudson Valley. The gallery is also involved in the secondary art market (reselling paintings, usually by renowned artists).This is Private Public’s second show; the first, “95 North,” was curated by Michael Klein, who ran a SoHo gallery for 15 years before he became curator for the Microsoft collection. Pieces by Sol LeWitt, Richard Artschwager, and Jonathan Borofsky appeared in that exhibition.

Freeman has had a colorful career. An art prodigy of the `90s, he was also a fabricator of sculpture for such notable figures as Claes Oldenburg and Nam June Paik. Then he moved on to film, where he worked as art director and production designer. For one high-budget R&B video, he had to build a castle in 12 days.

Freeman began painting again in 2010 when his husband abruptly disappeared. He now slowly produces detailed wintry forest scenes on queen-sized bed sheets with house paint. But these paintings will not hang in his gallery—at least not yet.

Freeman is conscious of the difference between his early career as a painter and his new project: “When you’re an artist, nobody returns your phone calls. When you run a gallery, everyone says yes.”

"I Remember...Remember?" will run at Private Public through February 3.