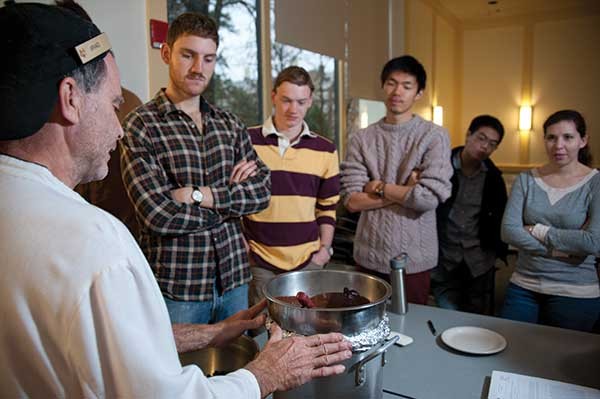 This past October saw the release of Nathan Myhrvold and Maxime Bilet's Modernist Cuisine at Home (The Cooking Lab, 2012), the abridged and simplified version of last year's five-volume, 2,400-page, 40-pound behemoth Modernist Cuisine. While the original is a virtuosic and comprehensive compendium of current scientific cooking knowledge, dizzying in its depth, detail, and complexity, the new volume dispenses with the expensive gadgetry and exotic ingredients that place the big book firmly in the realm of pornography for most people and focuses instead on useful and feasible techniques for home cooks. While nongeeks may still scoff or balk at the book, there is no disputing the fact that an understanding of basic scientific principles can make you a dramatically better cook and deepen your understanding of food.

It is with that truth in mind that Miriam Rossi and David Jemiolo, both science teachers at Vassar College, created The Culture and Chemistry of Cuisine, a course that fills up quickly every fall. Though it's technically a science class, it has no prerequisite so that students from any major can take it. Rossi is the Mary Landon Sague Professor of Chemistry, and Jemiolo is an Associate Professor of biology. Jemiolo explains that "Our philosophy is the enjoyment of food, but learning more than you would from just a recipe." Rossi continues: "Vassar is a liberal art school, so lots of students are afraid of science. Our goal is to overcome that, especially given how important technology is in our lives now."

A recent class met in a room off the dining hall where many of the lab sessions take place. (Some labs take place in an actual science lab, but nothing made there can be eaten). This class focused on chocolate, specifically tempering it—melting and cooling it so it hardens to a shiny, smooth finish—and featured Brad Goulden, Vassar's pastry chef, who has extensive knowledge of the subject and an infectious passion for sharing it. "Carbon is simple," he begins, "and if you put a lot of it together, you get graphite" like in pencil leads. "Press it with enormous force, though [so the atoms all align] and what do you get? A diamond." This principle manifests enticingly in a big bowl of melted chocolate that he stirs and pours off his spatula in a shimmering ribbon. By melting the chocolate, then "seeding" and cooling it with chips from the bag (which are already tempered) and then warming it back up to around body temperature, Goulden creates a liquid chocolate in which the cocoa butter crystallizes into one out of six possible sizes: the one that cools to a hard, glossy shell and melts in your mouth. Students carefully dunk cubes of fudge into the bowl using bent forks, gingerly lay them out on a sheet pan to cool, and then eat them all while they're still warm.

Besides the sweet side of polymorphous crystallization, the class offers examples of fermentation (cheese, bread, and vinegar), leavening (yeast and chemical), and the behavior of starches, sugars, fats, and proteins under all sorts of culinary conditions. Some of these facts are common knowledge: Eggs poached in water with a little vinegar hold their shape better. "It's in Julia Child's recipe, so we set up an experiment," says Jemiolo. Groups of students poached eggs in water with salt, vinegar, both, and neither, and studied the results. "What happens is the proteins in the egg whites are less soluble in acid, so it holds together; they don't disperse as much." They also float when they're done, which illustrates another principle at work: "There are not a lot of foods in nature that are basic [alkaline], and egg whites are one of them. When Mother Nature wants to make something basic, she uses bicarbonate. When you put it in water with vinegar, it effervesces and the protein coagulates and traps the bubbles so they float." This is exactly the same thing that happens in your pancakes when you add baking soda to leaven them.

The students experimented by cooking green beans in plain water, water with vinegar added, and water with baking soda. The beans cooked with bicarbonate remained green, whereas "with vinegar, protons displace the magnesium in chlorophyll, making pheophytin, which has an army green color." Bicarbonate prevents this from happening, keeping boiled or steamed greens vivid and appealing. But cook them too long, Jemiolo warns, and the alkaline water will react with the pectin in the vegetables, which is acidic, and they'll stay green but become limp and mushy. Rossi, also on the subject of pectin, illustrates another example where traditional recipes reveal an intuitive (and frugal) understanding of science: "Lots of jam recipes call for adding some lemon peel and pith, which has a lot of pectin, so you don't have to buy any."

"We talk about colors in food, and how some are water soluble and some are fat soluble," she continues. A good example is saffron, says Jemiolo—they often finish each other's thoughts, and clearly enjoy their collaboration—"it gets its bright yellow color from a long hydrocarbon with a sugar molecule on either end, which allows it to be water soluble. This allows it to stain rice yellow when you make risotto." Both teachers are Italian-American, and their love of the traditional foods of that country is evident. Because Vassar has such a diverse student body, however, they go out of their way to use examples from cuisines around the world and tie them to culture and history as well as science. Potatoes originated in South America, for example, but when they became a monoculture in Ireland that dependency on a sole crop led to the Great Famine of the 19th century.

Corn, another New World food that became a staple in Europe, offers another fascinating example of the perils of monoculture. Native people in the Americas treated their corn with lime, a process called nixtamalization, that softens the grains (as in the green bean example) and produces a lovely flour for tortillas. It also happens to free up niacin (vitamin B3), making it available to our bodies. At different times and places, like Northern Italy in the 18th century and the American South in the early 20th century, people subsisting largely on corn developed pellagra, a nasty disease resulting from a niacin deficiency; the body uses its own tryptophan (an amino acid) to synthesize niacin, but at the cost of other essential protein synthesis. "What came over was the corn, but not the culture," explains Jemiolo. Rossi offers some other examples: "We also talk about the effect of starch on foods; different kinds of rice have different starches, like sticky versus long grain," and that affects the types and textures of dishes that cultures develop, as does the need for combining foods—rice and beans being the simplest example—to create a complete protein.

By now most people are familiar with umami, the savory fifth basic taste. L-glutamate, the amino acid responsible for the flavor, is present in meat, mushrooms, hard cheese, tomatoes, and many other foods. The umami in glutamate is potentiated by several nucleotides, among them guanosine monophosphate and inosine monophosphate, which happen to be present in dried fish. What makes all this technical and polysyllabic information fascinating are the diverse ways in which different cultures have figured this out: tomato sauce with mushrooms or anchovies and parmesan on top in Italy, Chinese cabbage and chicken soup, fish sauce in Southeast Asia, and probably the purest expression of umami on the planet: dashi, the mother stock in Japanese cuisine, where glutamate comes from kombu (kelp) and dried bonito fillets provide inosinate. Humble, unassuming ketchup (derived from the Indonesian kecap) is a powerful umami-amplifier, based as it is on tomatoes and (originally, anyway) fermented anchovies, and everyone knows about soy sauce. If this still sounds arcane, try making your beef stew with a few anchovies and dried mushrooms and a bit of soy sauce and tomato paste and see if it isn't a lot more interesting.

The class works in the other direction, too; a deeper understanding of cooking chemistry makes scientific work more familiar. "All the processes are things we use in the lab all the time," says Rossi. "When you make espresso using a moka, the water comes up at a higher temperature than boiling [because it's under pressure] so the grinds are finer than you use for a drip, which is exactly what we do in high-pressure liquid chromatography," a technique for analyzing the chemical makeup of different compounds. The fine grind means more surface area, and thus better extraction, "but that also creates more resistance so you need more pressure."

The class compiles a cookbook at the end of each semester, and each student contributes a recipe. This is clearly an elective that people are happy to take; the students are attentive and cheerful. Henry Liang is an STS (Science, Technology, and Society) major who is writing his thesis on food labeling and GMOs. "It has increased my interest in both [science and cooking] and offered me more exposure because otherwise I wouldn't have the time." Sarah Haven is a psychology major who hopes to become a farmer. "I think it's important to make as much food as possible from scratch and thought this class would enhance my knowledge of cooking. Many of the food projects I am interested in—fermenting, canning, sourdough, and general preservation—have processes that could be strengthened by learning the basic chemistry behind them." Biology major Kevin Lee says that though his family loves to eat out, he wants to cook at home: "While the course has allowed me to appreciate chemistry even more, I feel so much pleasure and enjoyment while cooking, to the point where I am excited for the moment where I have a counter full of ingredients and cooking tools and I can make virtually anything I want." Haven, obviously angling for an A, concludes with a sentiment that should make her teachers proud: "I definitely will continue to cook and experiment with foods. I am grateful to have learned about the processes that occur in many different food projects and will keep this knowledge with me."

Vassar offers the Culture and Chemistry of Cuisine every fall.