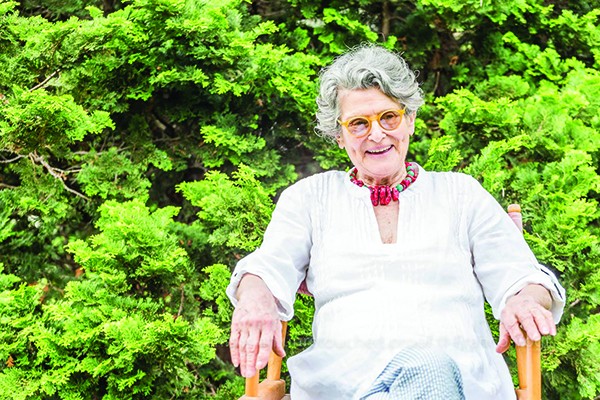 You know her face. Maybe you've seen her on Broadway, in her Tony Award-winning turn as "Big Edie" Beale in "Grey Gardens," or the current hit revival of "On the 20th Century." Maybe you saw "Full Gallop," her award-winning portrait of fashion icon Diana Vreeland, or caught her as Bruce Dern's sister-in-law in "Nebraska." Maybe you recognize her from reruns of the 1970s sit-com "One Day at a Time."

Show-business memoirs are not a rare breed. But most are written by stars, imbued with the luster (or taint) of celebrity. What sets Wilson's apart is her unique voice—bone-dry, hilarious, literate—and sharp-eyed gaze at the working life of a character actor. It's all here: The humiliating auditions, group dressing rooms, out-of-town meals, panicked understudy performances, nourishing friendships with fellow travelers, and always, always, the crippling doubt about the next job.

Character actors are the secret backbone of stage and screen; it's no accident that their awards category is Supporting Actor. They're the indispensible pros whose work other actors admire, but who pass nimbly under the radar of our fame-obsessed culture. The highest accolade for a character actor may be the title of the documentary that award-winning writer/producer Ron Nyswaner recently made about Wilson, She's the Best Thing In It. (It's a compliment she plans to take to her grave: It's engraved on a tombstone in her family plot.) The film, which premiered at South by Southwest, is coming to Woodstock this fall.

Wilson lives in Stone Ridge, in a classic white farmhouse with a scarlet front door like a bright slash of lipstick. It's one of those front doors that no one ever uses: A flagstone path leads past a breathtaking perennial garden to a side door off the porch. It seems apt that this consummate character actor always enters her house from the wings.

Wilson appears barefoot, wearing jeans and a T-shirt that says PEP. Her unruly hair is pulled back with a simple headband. At 83, she wears no makeup, her only adornment a chic pair of amber tortoiseshell glasses. She looks great. "Coffee?" she asks as she ushers me into her kitchen.

Full disclosure: I've been here before. I know Wilson through local theater company Actors & Writers, and a long-running writers' group that often gathers at this very table, under the giant Saul Steinberg drawing one of Wilson's designer friends hand-stenciled onto the wall. I've heard her read excerpts from "this memoir thing" for years. Even so, I'm stunned by the finished book.

My First Hundred Years in Show Business begins at a read-through of the Public Theatre's 1989 "Macbeth," at which Wilson, playing the First Witch, finds out the director is giving her biggest speech "to the younger, prettier witch." Times have been lean for the actress: "The past few years, the only parts I was getting called to read for were washroom attendants and bag ladies on television. I was even going up for parts against actual bag ladies. I had gone from featured roles on Broadway to playing parts labeled 'Woman' with lines like 'Hello.' So I was telling myself, Well, at least I'm first witch, and then this director took away the one thing that made me first: the chestnut speech."

It is, in screenwriting jargon, the inciting incident. At the first rehearsal break, Wilson beelines to a pay phone and calls a lawyer about getting rights to a book she and playwright Mark Hampton have dreamed of adapting: Diana Vreeland's D. V. The six-year saga of Wilson and Hampton's attempts to write and stage "Full Gallop," from its first reading at SUNY New Paltz to its triumphant off-Broadway opening, frames the memoir.

"I started out to write a primer for people writing one-person shows. It was a long trip; we were turned down a lot," Wilson explains. "I showed it to several friends, and their eyes glazed. They all said, 'You're not in it.' So I thought, 'Oh, they want more show-business stories.'"

She had plenty of those, all juicy. But going deeper was hard. "I was ashamed of my career and I didn't even realize it. Other people look at me and say, 'You've had all these successes,' but there was about 30 years in the middle where I wasn't doing much. I felt I had to fill in where I was before we started writing "Full Gallop." But it never occurred to me I'd have to write about what it was like to be me all those years."