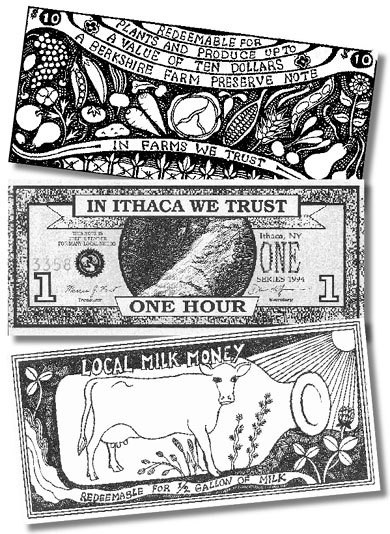 Citizen activists, listen up! We all know how loud money can talk in American culture, especially in these days of global capitalism. But money isn't only about power. It can also be about empowerment. Rather than try to turn down money's volume, an increasing number of people from many walks of life are working to create a new language for currency. The local currency movement, which has been steadily gaining in popularity over the past 30 years, includes activists, economists, farmers, environmentalists, regional planners, community development professionals, academics, and small businesspeople from around the world. At its forefront is the E.F. Schumacher Society, named for the author of the now classic text on sustainability, Small Is Beautiful. This month, the Great Barrington, Massachusetts-based E.F. Schumacher Society is hosting an international three-day conference at Bard College on "Local Currencies in the 21st Century."

"The Schumacher Society has, since its formation, been interested in local currencies as a tool for encouraging more vibrant regional economies," says the organization's director, Susan Witt. "What Schumacher proposed was that you produce locally for local consumption - that was his basic concept. What we're about is trying to figure out: What are the local tools that would encourage local production? What are the solutions that citizens can shape themselves rather than looking for government solutions? "

Although the local currency movement is generally little known, the concept is not exactly new. "Local currencies have actually been going on for centuries," says Chris Lindstrom, who is coordinating the conference. For instance, tribal commerce is traditionally based on a gift economy, he explains, "with everyone taking care of whatever needs to be taken care of," and during the Dark Ages, "everyone had their own currency in Europe; it's when economies evolve, becoming more complex, that currencies usually enter the picture."

In the US, local currency reemerged in the early part of the 20th century, gaining headway during the Great Depression, says Lindstrom. "A lot of communities throughout the world started to create their own currency systems as a way of addressing the deflation or inflation of their own currency."

The Wir Network (its name is the German word for we), founded in Switzerland in 1931, is the first established system and the longest lasting, with over 80,000 members today. "It's a hybrid of community-issued loans of the currency within the network and mutual credit - the direct debiting and crediting of accounts between members. When I buy something from you my account is debited, your account is credited," Lindstrom explains. "It's brought Switzerland through a lot of ups and downs in their economy, and allowed the Swiss economy to remain relatively stable."

Next on the local currency movement's chronology is the establishment in Canada of the first Local Economic Trading System (LETS) network. With local networks numbering over 1,400 throughout the world, LETS members trade goods and services among each other, and use a central operator to acknowledge each trade.

Perhaps the best-known continuing functioning local currency system is Ithaca Hours, established in 1989 in Ithaca, New York, by Paul Glover. "He issued it by sending out twenty hours [each] to people who agreed to participate in the system and it gradually evolved to include loans made out to community businesses," says Lindstrom.

If there is a hero in the world of alternative currency systems, it's Glover. "Paul Glover made a sacrifice," says Lindstrom. "He was willing to accept Ithaca Hours and be limited to meeting his living needs within the local economy - which meant that he was limited to the stuff he could buy at the farmer's market and to certain services, like the family practitioner who was willing to take Ithaca Hours."

Like Glover, in 1989, the Schumacher Society began experimenting with local currency, starting with the issuance of "Deli Dollars." The program was specifically geared toward helping an existing business remain in business after it lost its space. The way it worked, explains Lindstrom, was that "you paid eight dollars for a future face value of ten dollars. When the dollars matured in few months you could exchange them for food. So many people ate at the deli that they started to circulate the Deli Dollars within the local economy. The dollars wound up being passed around among people and used functionally as a currency."

Deli Dollars was such a success it was dubbed by the international press as an example of "Yankee ingenuity - a way to let a business thrive during economic downturn," says Lindstrom. In fact, adds Witt, "the publicity was completely beyond the scope of the five thousand dollars the deli raised - there was probably at least six million dollars worth of international TV programs."

Next, the Schumacher Society issued Berkshire Farm Preserve Notes from 1989 to 1991. "There's really an ethic here in the Berkshires for finding those citizen-based solutions," says Witt. "Following Deli Dollars we worked with two farms, Taft Farm and Corn Crib, to issue the Notes. Again, that was a way for consumers to support the kind of small farms they want to see in this region."

Also under Witt's direction, the merchants in Great Barrington started BerkShares, a summertime promotions program. "The shares weren't a true local currency yet," explains Witt. "For every ten dollars you spent at one of the seventy participating businesses you were given one BerkShare; then, during a three-day period in September, you could use those BerkShares as cash." Once again, the experiment was a success. According to Witt, $75,000 went into circulation, and $28,000 was returned. "That's a huge return on a giveaway," she says. "There was a real spirit of festivity in the community."

Currently, Witt is working on establishing a year-round local currency, possibly to be backed by farm produce during the summer and cord wood in the winter months. "We, of course, have concepts of what a local program will look like, but its evolution will grow out of the local community," says Witt. "What this conference is doing is bringing up the principles for sound monetary issue. If a community is going to take on issuing its own currency, how does it do so in a responsible, sustainable, sound way?"

Any given community is capable of successfully starting its own currency system, says Lindstrom, so long as those involved are well-informed. "The most valuable resource for starting a local currency system is information and reason," he says. "A lot of them have not succeeded due to lack of information or understanding as to how to sustain something like this. The ones that have been successful have also managed to reach out to very important sectors of the local economy. That's the discussion we want people at the conference to have."

E.F. Schumacher Society's conference "Local Currencies in the 21st Century" will be held June 25-27 at Bard College. For information about the conference, call (413) 528-1737 or visit www.smallisbeautiful.org.