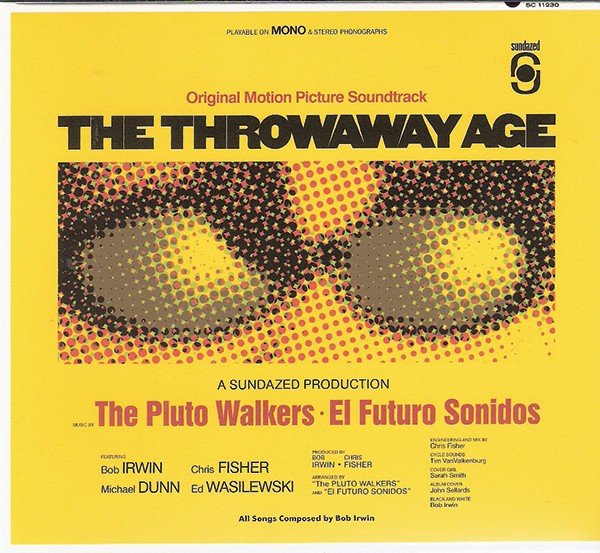 There's a game that rock critics like to play. You know it well. Select one obscure reference from column A and another from column B, then tie them together with "meets" or "if he had been in." Confused? Don't be. It's like No Neck Blues Band meets Judee Sill. It's like Alan Vega if he had been in Shonen Knife. Got it? Of course you do. So, as pertains to The Throwaway Age, well, it's like New Testament-era Ventures meets producer Curt Boettcher. Or, it's like surf/rockabilly guitarist Jerry McGee if he'd been in the Millenium. (Ten points to you if you sussed out that those two scenarios are the same thing.)

Diamondback
From Bob Irwin and The Pluto Walkers' album The Throwaway Age.
Update Required To play the media you will need to either update your browser to a recent version or update your Flash plugin.

Coxsackie-based Bob Irwin, who leads the Pluto Walkers and El Futuro Sonidos (two bands that share the exact same lineup), has been busy making cultists happy for years with his Sundazed Music label's ridiculously fine reissue work. But many are unaware that he's also an exemplary guitarist and composer in his own right. The Throwaway Age is cleverly posited as an "Original Motion Picture Soundtrack," and the all-instrumental disc certainly has an electric-sitar-drenched, groovy ambiance. But despite its lack of vocals it also has a sunshine pop underpinning that would make Boettcher proud. And the "fuzz-filled dreams" referred to on the cover are clearly the stuff of McGee's dreams, too. "Two Timer" is eerily familiar. "Vindaloo" is as spicy as its title. And "Diamondback," with its shaking tambourine, nods to the Dick Dale-surf roots of the whole situation without forgetting to stake its own turf. Is The Throwaway Age brilliant? Maybe. Buoyant? Definitely.