Sometimes you can judge a book by its cover and still not know the whole story. The Brian Wilson Shock Treatment, wildmen (and -women) who split time between New Paltz and Brooklyn and ply a tough but simplistic brand of wiggy garage rock, ostensibly need a new CD mainly as an excuse for another round of touring, as many local release-party gigs as they can wrangle, and perhaps a new T-shirt design. More than this shouldn’t be expected from a band that features on its CD cover a guy with a box on his head and wielding a battle-axe, and a PO box address rather than a URL (hey, it’s 2011!) on the back. And the opening few tracks of Druid Time Lords bear out such modest goals: walking bass lines buried in admirable amounts of guitar goo-goo muck, and a likable knuckle-dragging aesthetic in general.

But then comes the more ambitious “Bangladesh,” a hypnotic jam that’s kissin’ cousins with Black Rebel Motorcycle Club, and any assumptions made about this band get foggy. That tune is followed by a woolly cover of “Pleasant Valley Sunday” (yes, made famous by the Monkees) that retains its killer hook even as it threatens to spin out of control (it doesn’t), which in turn sets up the swinging monster beat of the title track. All of this action takes place in the first half of this 50-minute CD; later songs include “The Moons of Jupiter” (swirling, flute-driven dark ambience), “Snake Goddess” (bouncy distortion-pop), and the slow-burning, trippy ramble “Interstellar Loser.” www.myspace.com/thebrianwilsonshocktreatment. 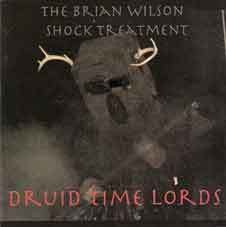