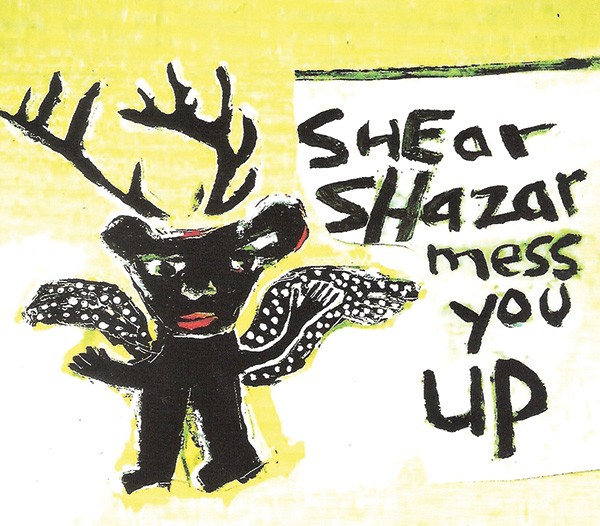 Lest anyone forget Woodstock's own songwriting royals Jules Shear and Pal Shazar each once fronted '80s rock 'n' roll bands—Jules and the Polar Bears and Slow Children, respectively—Mess You Up opens with a squeal of feedback and big drums drenched in reverb. The ensuing rocker "Road Life" sets the tone for this all-too-brief five-song EP, the sophomore release from a long-time couple only recently conjoined in artistic endeavor. Their self-titled 2013 debut tended more toward chamber pop and folk, but Mess You Up, while not all rock, certainly puts the pedal to the metal 3/5ths of the time.

"Takeout" by Shear Shazar
Update Required To play the media you will need to either update your browser to a recent version or update your Flash plugin.

Producer Dave Cook provides a broad palette, as Shear and Mark Bosch (Ian Hunter) wield electric guitars with bracing ferocity, Gail Ann Dorsey (David Bowie) lays down propulsive bass, and drummer Chris Gartmann (3) keeps it all rolling down the highway for the up-tempo numbers. For the lighter touch, Professor Louie (the Crowmatix) adds delicate piano to the bitter ballad "Takeout," on which Shear wryly sings, "The service at the takeout place made me curse / but I wish that it had gotten worse." This line comes after a gripping recitation where, as is usually the case with Shear, we hang on every deliciously wrought syllable. Shazar's distinctive sweet 'n' sour delivery really shines on a show-stopping, slow-burn version of the 1965 Lesley Gore pop lament "It's My Party," which, with Shear harmonizing, this duo makes its own. Shear-shazar.com.