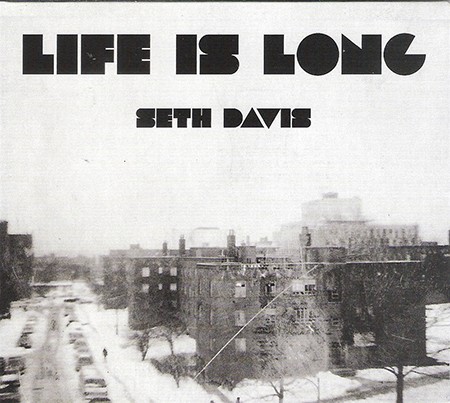 The lyrics, music, performers and production on Seth Davis' fourth album are all top-notch. But, beyond that, it is easily accessible by young and old, square and hip, the blissfuly ignorant mainstream and the manically well-informed depressive. Davis is an old-soul troubadour in a 21st-century landscape. A Dylanesque mingling of Jakob's easy-on-the-ears-and-brain voicings and lyrics with Bob's personal and societal demons lurk insightfully lurking about. Instantly memorable songs like "Love Part 2" have an indie-folk pop feel reminiscent of the Wallflowers, whereas others waltz into familiar shades of The Band. And, like much of the art borne in the shadow of the Gunks, the mountain jags and whisper-winds dig their meat hooks into the blood and sinew of Life is Long. From the catchy singalongs to the clap-hands stomps, age-old themes and melodies are steeped and rebirthed with glorious sediment and a garnish of gritty polish. Familiar names like Rhett Miller (Old 97's) and Simon Felice make appearances, but it is the lesser knowns that star and sprinkle fairy dust about like glitter at a rave. Sufjan Stevens would be most approving of Jim White's production which includes trombone, cello, pedal steel, dobro, trumpet, flute, and violin. Marlon Patton's drums and bass drive us home. Guitarist John Burdick's (Sweet Clementines) tasty licks and grab-you tones are appropriately irreverant standouts and the guest vocals of Marianne Tasick, Jason Sarubbi, and others lay the beautiful and final complement of dichotomy to Davis's heart-torn highway registers. SethDavis.com.

Love Part 2
Seth Davis
Update Required To play the media you will need to either update your browser to a recent version or update your Flash plugin.