Richard McGraw Burying The Dead
(Non-Utopian Records, 2009)
Indie artist Richard McGraw has made a musical career out of his attempts to climb out of the quagmire of despair, despite Fate’s attempts to keep him in the muck. Like other noteworthy, dramatic song-poets who have trod the path before him—Bob Dylan, Leonard Cohen, Tom Waits, Nick Cave, Scott Walker, Lou Reed—McGraw contemplates the trials and tragedies of the human condition with beautiful and poignant honesty. His uncommon vocals tremor and plead heavenward, relaying woeful tales of love and loss, death and remorse, all the while straddling the fence between the sacred and the secular.

McGraw’s third release, Burying the Dead, is a lyrical tour-de-force, emboldening familiar themes—teetering on the brink of sanity; deifying lovers; a longing for God—with even more musical maturity and a bevy of world-class players that includes local faves Baird Hersey and Prana. Using a signature layered melancholy folk sound that builds in intensity to its final resolve, McGraw successfully pulls off several covers (Leonard Cohen’s “The Faith” and a rewrite of his “Chelsea Hotel #2,” here as “Balmville Motel”; Billy Joel’s “My Life”), as well as bursting forth with passionate, guitar-based originals. His sophomore release, Song and Void Vol. 1 (Non-Utopian Records, 2006), was hailed by Performing Songwriter magazine as “a true masterpiece.” Dare I say Burying the Dead leaves it in the dust?
www.myspace.com/richardmcgraw. 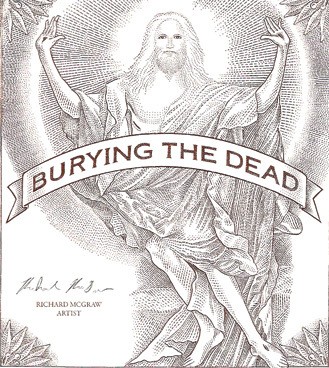