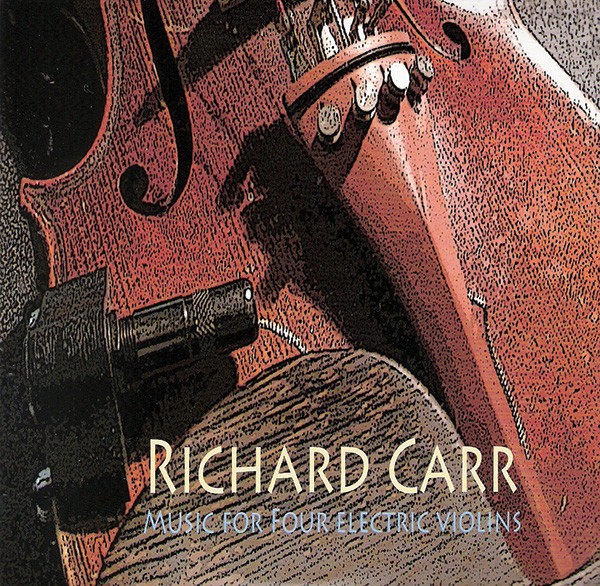 In the folksy and self-effacing liner notes that accompany his Music for Four Electric Violins, Rosendale's Richard Carr halfheartedly offers "possibly post-minimal" as a genre descriptor for this batch of original music, and the glove sort of fits. In these 14 colorfully titled instrumental compositions, one hears the perspective-shifting pattern studies of the Minimalist composers, as well as their keen interest in electronics and in the subtleties of "world" rhythms (more Reich than Glass). As for the "post" in "post-Minimal," Carr routinely violates the ascetic, reformer's principles of pure academic Minimalism by stepping to the front with snatches of lyrical, expressive, and most likely improvised violin playing, as on "Back the F Up," on which Carr the soloist stretches out over a variety of delay-tap Minimalist patterns.

Richard Carr: Particleboard
Update Required To play the media you will need to either update your browser to a recent version or update your Flash plugin.

It comes as no surprise that Carr, who holds a doctorate in music education from Columbia, has worked with the likes of Bill Laswell, Fred Frith, and Swans, all of whom have found ways to integrate avant-garde and Minimalist processes into pop contexts (stretching the definition of "pop" about as far as it will go before snapping). There are no club beats and voice samples on Music for Four Electric Violins, and the vibe here is as introspective as you'd expect a one-man-as-band project to be. Such winners as "Blowfish" and Particleboard" overlay serenity and distress, euphony, and dissonance like a warring ensemble formed in the Jungian unconscious. Rcarr1018@gmail.com.