John David Schrader’s influences are obvious—he’s had an earful of Springsteen, Mellencamp, Clapton, and all manner of classic rock in his years, and a formal musical and media education has earned the top-notch performer five ASCAP awards. But there’s nothing of a poser here. Schrader’s lyrics expound struggles on the street that “beat his ass to the ground,” life-threatening illness, and the anger and loss of a young boy that shaped him into the tenacious survivor he is today. On this third recording, he mingles guitars, drums, keys, and vocals to create a full-band sound; he also wrote, produced, mixed, and recorded the CD himself.

Surprisingly, the record begins with a graceful original instrumental by the Moscow Session Orchestra that breaks into Schrader’s head-punching, multi-layered signature sound, complete with upbeat horns and an intense, bitter rasp telling off the woman who gave him a “Shock” with a few four-letter words. He gets out his ya-yas on “Dirt” and “Ain’t That Man,” spitting out catchy hard-rock grooves that seethe with pissed-off pride. Even the occasional ballad, such as “Better Than Me,” is solidly heartfelt and relate his hell and hope. He’ll play Skytop Steakhouse in Kingston on July 23. www.johnschrader.com. 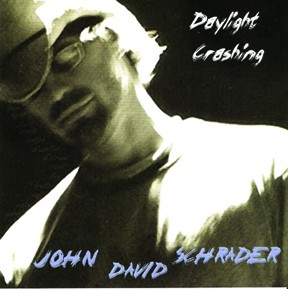