Joe Beck and Betty MacDonald
And Here’s to You
(2009, MacDee Music)

Guitarist Joe Beck, who died in 2008, and Woodstock violinist, vocalist, and radio host Betty MacDonald, who passed away on August 9, 2010, have now finished what they had begun. Several years ago, Beck had the idea of recording duets by them, but he passed before they were done, so the sessions were shelved. During Beck’s memorial service, keyboardist and coproducer Pete Levin, a close friend to both, talked with MacDonald about completing the sessions. And so eventually Levin and others “reassembled” the music that would become And Here’s to You.

Beck and MacDonald possess each piece they play on, contoured to their personal temperament and tempo. MacDonald’s physical voice extends to her violin, which quivers with warmth and affection on the standards “So Nice to Come Home To” and “Georgia on My Mind.” It’s rare to hear the lyrics to Victor Young’s serenade “Stella by Starlight” sung with as much pathos as MacDonald’s version here. As Beck’s “Lullaby” quiets the room (and his gentle tone fills it), it invokes the image of MacDonald coaxing a reluctant rapscallion to sleep. Levin (on melodica on “September in the Rain”), pianist Warren Bernhardt (on the title tune with MacDonald), and vibist Mike Mainieri (“In Remembrance” with MacDonald) also make fine contributions. Shakespeare said, “No legacy is so rich as honesty.” What stirred between Beck and MacDonald during And Here’s to You was nothing less than honesty. It’s a poignant remembrance for family, friends, and ardent admirers to cherish. www.macdeemusic.com. 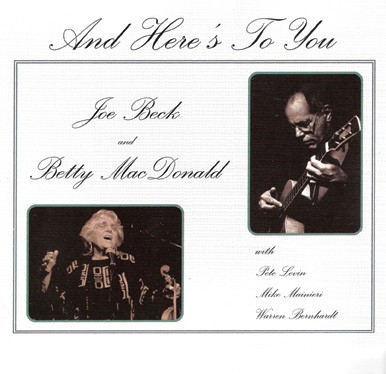