He didn’t know it at the time, but pianist and label owner John Esposito was giving something precious to Woodstock resident and flutist/piccolo player Jayna Nelson: “He was giving me a gift.” What was to become Bloom of Creation was a live performance recorded in 1999 on a DAT tape. After being missing for a decade, Esposito found it and decided to release it on his Sunjump Records. The creative fire of Bloom of Creation came from the embers of Esposito’s A Book of Five Rings. Half of the players of that album—Nelson, Esposito, trumpeter Matt Schulman, and drummer Peter O’Brien—gigged together for a spell and then, with the addition of bassist Francois Moutin, bore Bloom of Creation at the now defunct Alterknit venue of New York’s Knitting Factory.

“Fact: Re-Blues” is a free-kinda-blue tour de force exemplifying the band’s ensemble-ness with the members stretching into each other’s musical space without creating a crowded sound. The coffee-table piece is “Tim’s Brain,” which assigns players to either half of the human brain to musically interpret its emotional and thinking processing. This is Nelson’s bailiwick: She’s an Interactive Metronome provider who assists in training the brain to “process information more effectively.” Her other focus is her playing that possesses a balanced logic and earthiness (“Indah Dreams,” “Star Seed,” “Junk DNA Dance”) and intricately weaves her sound into the fabric of a composition (“Agar”). With the Bloom of Creation, Nelson has landscaped an organic milieu that is openly defined. www.sunjumprecords.com. 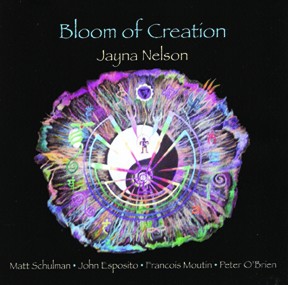 Poem: A kitchen made of split-pea soup