CD Review: It's Not Night: It's Space 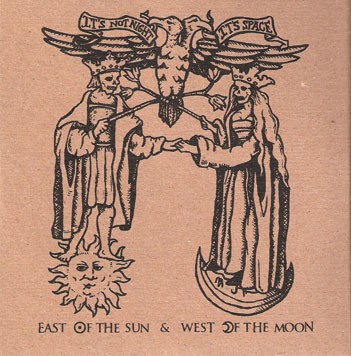 The loose collection of subgenres flying under the space rock banner varies widely, and could be as whimsical and exploratory as early Pink Floyd or as hypnotic as the finely honed legendary German ensemble Can. Often though, the best space rock demands a meditative concentration and focus, rewarding the listener with a wonderfully interactive music that is very spiritual in a courageous way. This is a rough and ragged whirlwind of repetitive sound that pulls off the accomplishment of sounding incredibly heavy and nimble at the same time. The sometimes illusive dichotomy came to mind while listening to the New Paltz trio It’s Not Night: It’s Space.

The band’s debut EP is a deep recording that often brings up the rise and fall of tones and emotions common to meditative sittings. Guitar player Kevin Halcott, drummer Michael Lutomski, and bassist Tommy Guerrero play with a truly unified intensity. The opening track, “I Amness,” is an undulating sound collage inhabited by thunderstorms, tribal chanting, and disembodied quotes from the psychedelic philosopher Terrence Kemp McKenna, former World Wrestling Champion Hulk Hogan, and the polymath Robert Anton Wilson’s quote “We’re trapped in linguistic constructs…all that is metaphor.” The band goes on to spend the rest of the CD proving that last assertion wrong, though, as the wordless compositions speak volumes over tribal-bass drumbeats, an armada of distortion effects, unexpectedly funky break beats, and the concise focus of what the band terms its “heavy raga-roll drone journeys to the depths of inner & outer space.” Innis.bandcamp.com.