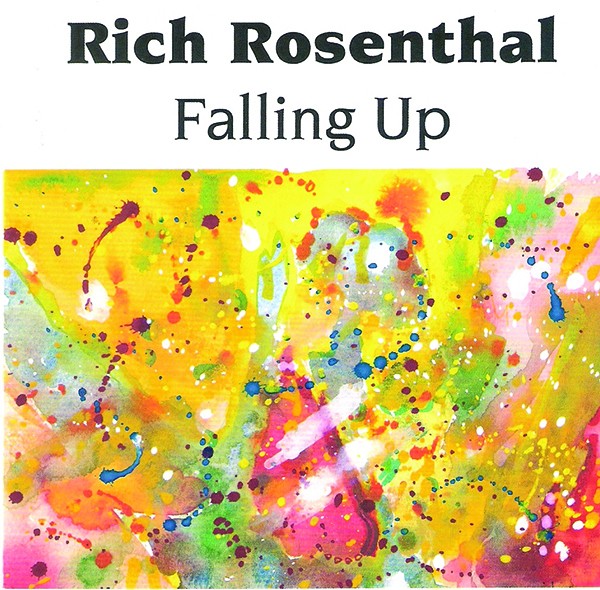 About five years before his family moved north, Poughkeepsie guitarist Rich Rosenthal had his mind blown. When he was just 12 years old, the Bronx-born musician, thanks to his mentor and guitar teacher Dave Moreno, began attending performances by some of the paragons of free jazz: Cecil Taylor, Sun Ra, Ornette Coleman, the Art Ensemble of Chicago. Challenging stuff for a young kid. But Rosenthal was up for challenges, pursuing his musical studies and dreams despite unsupportive parents, struggles with drugs and depression, and decades of supporting himself as an MTA pipefitter and Metro-North train repairman. In the 2000s, amid making his name via gigs with revered neighbors Joe McPhee, Pauline Oliveros, David Arner, Joe Giardullo, and others, the guitarist made his recording debut on saxophonist Giardullo's 2007 album Red Morocco.

Now Giardullo returns the favor, appearing alongside bassist Craig Nixon and drummer Matt Crane on Falling Up, Rosenthal's inaugural set as a leader. The six extended tracks here—four originals plus Steve Lacy's "No Baby" and Jimmy Lyons's "Wee Sneezawee"—are shrouded in a distinctly mysterious mist spiked with occasional ensemble dissonance and Rosenthal's razor barbs. The icy octaves of "Powder Hysteria" open the set and bring to mind the great John Abercrombie, another upstate jazz guitarist, while the suitably named "Eternal Meltdown," with its fuzz-seared lines by Rosenthal and expansive passages by Nixon and Crane, closes it out. A rewarding debut offering, and one that portends of more excellent recordings to come. Richrosenthal.tumblr.com