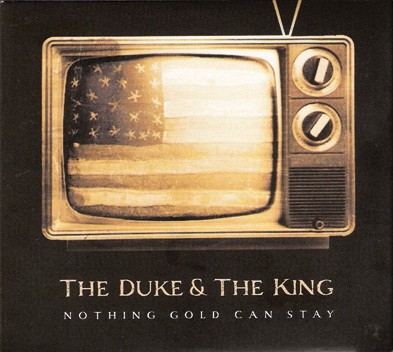 The Duke & the King
Nothing Gold Can Stay
(Ramseur Records, 2009)
There’s nothing coy in the outward presentation of local duo the Duke & the King’s Nothing Gold Can Stay, its title under a rabbit-eared TV set showing Old Glory in washed-out sepia. On the album itself, though, the faded, forfeited American Dream gives way to deception, malfeasance, and post-dramatic emotionalism of a more personal nature. “A regular boy in the Reagan time / And boy did I want my MTV / Everything was easy, so easy,” Simone Felice sings wearily on “Union Street” over a slow, bittersweet folk rock tune. It’s poignant and evocative—no surprise, since the vocalist, ex- of his namesake band the Felice Brothers, is also a published author.

It’s odd, then, that the Duke & the King (the band’s name comes from the pair of grifters in The Adventures of Huckleberry Finn) are most effective when Felice is at his least wordy. The stirring “Lose Myself,” the album’s centerpiece, starts with a few soft electric piano chords caught between half-received radio signals before opening into a crescendo reminiscent of mid-’70s Pink Floyd, with Felice mournfully repeating the sole lyric, “It makes me wanna lose myself.” But while there’s little to fault technically on Nothing Gold Can Stay—the band comports itself with flair and restraint throughout—songs like “Suzanne” (not a Leonard Cohen cover) and “Still Remember Love,” bracing on the lyric sheet, are performed as if from a slight emotional remove, dampening their power. Perhaps that’s hair-splitting, but with Felice’s beautifully sandy vocals and his band’s obvious skill, it’s hard not to imagine how this solid debut could’ve been even better. www.ramseurrecords.net.