Guitarist and Red Hook resident David Temple is a virtuoso whose fourth recording is a welcomed addition for fans of classical instrumental music, or for those simply looking for some respite during the bustle of the holiday season. Recorded in the Church of the Messiah in Rhinebeck, Winter Stillness is just that: a collection of short, graceful tunes that are cause for reflection, showcasing Temple’s appropriately festive and nimbly intricate finger-picking style. He has carefully selected tunes with an international flavor, written by long-deceased popular guitarist/pianist composers from Spain, Italy, France, Germany, Brazil, England, and Mexico.

The opening track, “Renaissance Melody,” is a three-in-one of products of the Italian Renaissance; the anonymously written “Canzone,” Cesare Negri’s “Bianco Fiore,” and Vincenzo Galilei’s “Saltarello” introduce Temple’s yuletide tone. Lovers of J. S. Bach will melt into his prelude in C major, which leads into the Spanish flavor of Fernando

Sor’s pensive studies in B minor and D major. The slow phrasing of Francisco Tarrega’s “Lagrime (Teardrop)” is a perfect companion to a romantic snowfall, while the melancholy strains of Erik Satie’s well-known “Gnossienne No. 1” reflect the longing and desperation of winter. “The Swan,” by French pianist Camille Saint-Saëns, is gently majestic, while “Sounds of Bells” by Brazil’s Joao Pernambuco is played in jolly, quick-paced choro style. Temple’s unique phrasing on the closing track, “Amazing Grace,” makes the wildly popular tune almost unrecognizable. The guitarist will perform his annual holiday concert on December 26 at the Center for Performing Arts at Rhinebeck. www.davidtemple.com. 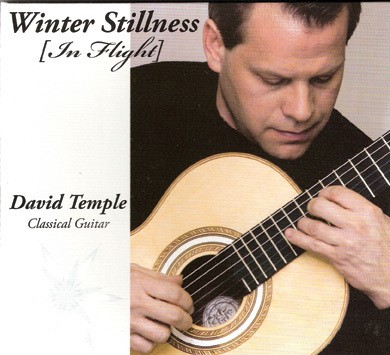