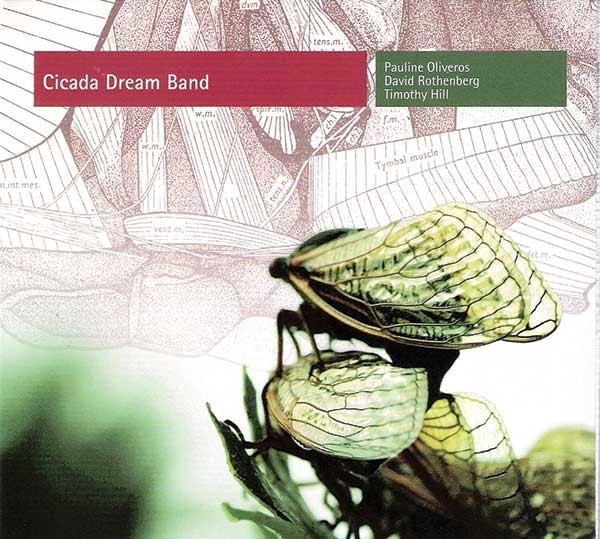 On Cicada Dream Band, three decorated local eminences of experimental music seize a unique opportunity presented them by nature—not exactly a once-in-a-lifetime chance, but not far off. 2013 was the summer of the 17-year cicada. The internationally known clarinetist David Rothenberg, who has done much recording of and writing about the sounds of nature, formed a trio with Kingston's avant-garde accordionist and composer Pauline Oliveros (founder of Deep Listening and 2012 winner of the John Cage Award) and the harmonic overtone singer Timothy Hill. They imported some cicadas into the confines of Woodstock's storied Dreamland Studio and recorded with them there. Other animal performers—electronically enhanced Latvian frogs, European blackbirds, a humpback whale, and a "slightly musical conehead" (?)—made the final cut as well.

The trio edited over three and a half hours of material down to 11 titled tracks totaling just over an hour. The music moves from a highly conversational chirpiness ("Room at the Inn") to multilayered and subtly patterned drones ("All Creatures Get It"). Cicada Dream Band surprises with its timbral consistency; it is often difficult to distinguish the reediness of the accordion, the clarinet, and the remarkable range of tones that Hill produces from the processed animal voices. It is a timbral palette built around likeness, blending, and subtle variation. Terranovamusic.net.