Caving 101: A Beginner's Guide to Spelunking

In 1842, in Schoharie County, a farmer named Lester Howe followed his cows to a cool breeze emanating from a hole in the ground. He tunneled deeper day after day until, about 156 feet down, the tunnel opened onto a damp, winding passageway about 30 feet wide and 1.5 miles long, the main path through what is now called Howe Caverns.

The formation of Howe Caverns began some 360 million years ago, when continental collisions formed cracks in limestone that had been deposited on what was then a shallow tropical ocean floor. Water percolated down through the cracks, dissolving the rock and creating joints that widened over time. This went on for a couple hundred million years; then, during the most recent Ice Age, the glacial lake that filled the Hudson Valley flooded through the fractured limestone, causing extensive erosion and forming the series of vast natural caverns that Howe later happened upon.

Howe was an early novice spelunker (a term derived from the ancient Greek for "cave" or "grotto"), and his rediscovery of the cave system that bears his name was, eventually, a catalyst in the development of a caving tourism industry. Howe Caverns remains an excellent place for the caving-curious to get their feet wet, so to speak. The Cave House Museum of Mining and Geology, located at the original entrance to the caverns, provides equipment for its variety of tours of the largest cave in the Northeast open to the public. The other major commercial cave in New York, Secret Caverns, is just a couple miles down the road. Tours are led by the descendants of Roger Mallery, a civil engineer who discovered the cavern in 1928 after—in an incredible coincidence—following two lost cows.

Spelunkers in New York can also explore "wild" caves, which do not offer guided tours, and which the novice should not explore without guidance. Many are on private land. Those interested in subterranean exploration would do well to start by joining a caving club, or "grotto." The National Speleological Society has a list of groups, plus basic beginner tips.

"A lot of people don't realize there actually aren't that many caves in this region," says Cara Gentry, a geologist and the president of the Shawangunk-Catskill Area Grotto. At Sam's Point in Minnewaska State Park Preserve, there are fissure ice caves accessible via trail, and elsewhere there are abandoned mines, like Widow Jane in Rosendale, that offer the thrills of spelunking. But unlike natural caves, which are formed over millennia by slow erosion, mines are much less stable because they were blasted out by humans. "We do occasionally explore the mines," Gentry says. "But most of them are not monitored regularly."

The standard caving equipment is a helmet, an extra layer of clothes, a first-aid kit, and three light sources. "Especially in a wet environment, you need a backup to your backup," says Gentry. You can buy a headlamp at most outdoor or auto parts stores, or fashion a DIY one by duct-taping a flashlight to a helmet. Hiking boots are suitable for most caves. Some people wear knee and/or elbow pads to protect joints as they scoot through tighter areas. More advanced cavers use ropes, which also require gear like carabiners, bolts, and slings.

Like Howe Caverns, most of the caves in eastern New York are formed in limestone, according to Paul Griggs, a geologist in Troy. In general, most caves are formed when an acid dissolves bedrock (usually limestone, but also marble, dolomite, and gypsum). That can be water seeping down through soluble rock and interacting with carbon dioxide to create fissures, or a compound like hydrogen sulfide rising upward and dissolving rock from below, which is how the Carlsbad Caverns in New Mexico were created. More exotic cave-creation methods include lava tubes, wave-cut coastal caves, and glacier caves.

More than type, the shape and path each cave takes varies based on local geology. Younger and softer rock dissolves more easily, creating large, open caves that look like bubbles on a chain. The limestone in the Hudson Valley, on the other hand, is very old, nonporous, and brittle: Water tends to flow along the surface before finding a crack that allows it to penetrate into the rock, creating patterned fractures that eventually become jagged, asymmetrical caves.

Furthermore, the local limestones have been heavily impacted by glaciation, the effects of which are still visible in the striations and sediment left behind. In Clarksville Cave, located in Clarksville, Albany County, you can see how far glacial meltwater flowed into the cavern by the rows of progressively sized pebbles left behind in the rock, a process known as imbrication. "There's a lot to see inside a cave when you know what to look for," Gentry says. 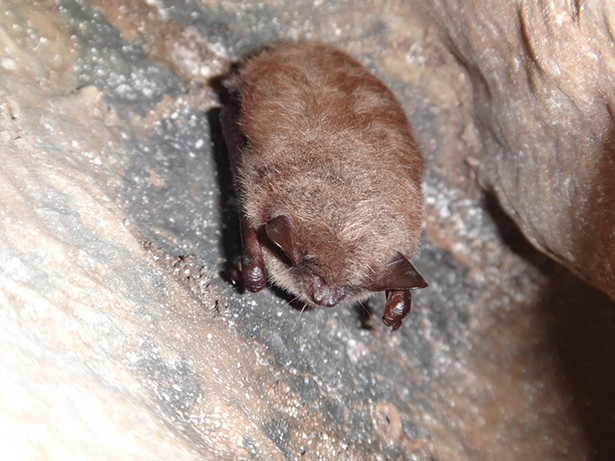 And those cool breezes? Temperatures in caves are remarkably consistent, and are usually close to the average annual temperature for the region (50 to 52 degrees for the Hudson Valley). In the winter, the breeze emanating from the mouth of a cave will feel warm relative to the outside air temperature.

Many cave environments are very fragile, so like campers, cavers embrace the "leave no trace" mantra. Caving can be physically taxing, but it's a peaceful, exploratory pastime, and it attracts that type of participant. In addition to the National Speleological Society, beginners interested in exploring further can check out the Northeastern Cave Conservancy, or Bat Conservation International if they want to learn about the most (in)famous cave dwellers. The Schoharie County-based online bookstore Speleobooks has a comprehensive selection of books, gifts, and other cave-related ephemera.

Or just follow some cows. If they lead you to some yet undiscovered cavern, take it as a sign.