When the multimedia performance troupe Cave Dogs titles a stage work "Sure-minded Uncertainty," this is not a glib, oxymoronic turn of phrase; it describes how the company views the world and dramatizes it in their pieces: a stew of skewed, personal observations, each containing a kernel of truth. Like the blind men and the elephant, each of us is right...a little.

This philosophy is rooted in the Ulster County-based theater group's origins in 1991, explains Cave Dogs founding member Jim Fossett. Co-founder and wife Suzanne Stokes based the work of Cave Dogs on her MFA thesis: the history of shadow puppet theater.

The resulting body of stage work—Cave Dogs has created eight pieces since 1991—explores the power of storytelling through shadows. Behind this approach lurk our prehistoric traditions of handing down legends around the campfire, but also heady ramifications on reality versus perception and how misconceptions plague and power our world. The group's first performance, which sparked its name, was an environmental piece held in the Widow Jane Mine in Rosendale.

The current piece, "Sure-minded Uncertainty," will be performed at BSP Lounge in Kingston May 17 and 18.

Cave Dogs performances embrace "political, humanistic causes, social causes—all of the above," Fossett says. But whipping up onstage broadsides is not their primary goal.

For those who come simply for a visual feast, the group will happily oblige. Each show employs a multilayered experience of front and rear video projection, computer-generated imagery and audio montages with sampled sounds. (In the low-tech early days, images emanated from a 35mm slide projector and utilized black slides that were etched to create the alternately seductive and jarring designs.) These combined effects provide the environment for a series of shadow plays, featuring actors in silhouette, puppets, and an array of props. The result is a fever dream with redeeming social value. "People might just enjoy the visual and audio experience and say it is great to watch," Fossett says.

For those who seek a message to take home, they are usually hiding in plain sight. "Archaeology of a Storm" used natural disasters from the 1920s to 1990s to examine the human condition and the strength that comes from adversity. But it was also—shades of Katrina—a parable on government that falls short in its duty of serving the poor. "We take inspiration from things that keep us going in the world," Fossett says, "rather than being blatantly anarchistic."

"Sure-minded Uncertainty," which Cave Dogs first staged in 2011 (and performed last summer at Sweden's Malmo Festival), depicts a storyteller reading from a book on her lap. As she spins yarns, scenes and characters spring in shadows from the book. We meet a scientist, a tailor, and a technology expert, among other Everymen. The piece examines the role that each person plays in this world, how we interact and the impact each of us has on the environment. 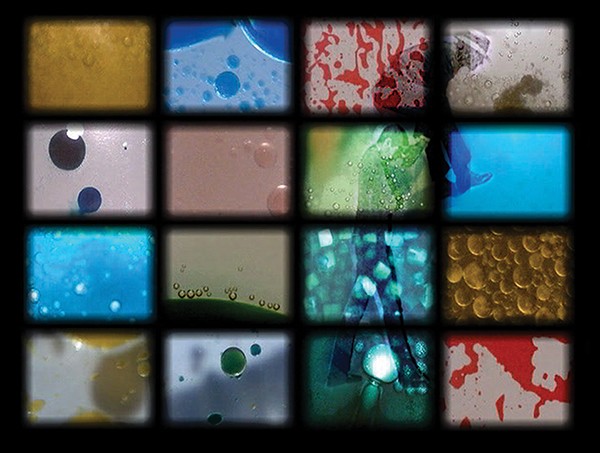 People expecting a Luddite screed or a manifesto on global warming, however, may leave disappointed. "We're not getting up on a soapbox to say technology is bad," Fossett says. "It's more of a matter of asking people to consider things."

Despite the expansive use of high-tech media, Fossett finds low-tech effects most effective in bringing to life Cave Dogs stories. The tools most frequently employed onstage to cast their spells? Cardboard and flashlights.