Catskills Conf 2017: A Tech Conference in the Woods

As long as you move in the direction of the crowd, it’s possible to breathe, but if you stand still for even a moment it becomes vertiginous,” writes Sam Kriss in the Atlantic, describing this year’s Web Summit, Europe’s largest technology conference. The tech conference circuit is well populated—Bizzabo, an event technology company, lists almost 200 of them across the globe scheduled for 2017. Many have corporate sponsors like Microsoft and BMW. Known for highlighting innovation, the world of technology conferences is broad-ranging, offering everything from hyper-targeted skills workshops to lofty discussions on revolutionizing perceptions. Some conferences even do both. At RailsConf in Phoenix last year, a discussion on the pursuit of rest was offered alongside open source deep dive talks like the one on Rails source code.

And then, there’s Catskills Conf, the three-year-old technology conference that takes place at the Ashokan Center in Olivebridge. The conference offers a different approach to tech conferences, one that is designed to energize people by highlighting diverse voices and human stories in a setting that is intentionally outdoorsy, informal, and small scale. “It’s all about helping people to connect in the real world, celebrate each other’s work, and create relationships,” explains Catskills Conf co-organizer Kale Kaposhilin. From this, Kaposhilin, who sees technology as essentially handcrafted work that creates the future, believes people will be inspired to innovate. “Whether it’s writing code or making campfires or food together, the same creative spirit is in all of that.”

Attendees and speakers alike roll into the Ashokan Center’s lodges with sleeping bags in tow, ready to network while foraging for wild edibles or toasting marshmallows over an open fire. “People engage on a professional level,” describes co-organizer Shauna Keating, “and then, in the evening, because the vast majority of people stay there in bunkbeds, like summer camp, there’s a human connection and friendships being formed.”

That why conf isn’t just an abbreviated form of the word, conference—it specifically references something that’s part conference, part retreat. With a maximum of 150 participants (due to the Ashokan Center’s space constraints), Catskills Conf is single-track, as opposed to hosting a menu of simultaneous presenters from which listeners choose. It encourages intimacy, so organizers actively shape it to be a welcoming space. “The content of our talks is intended to be approachable for any skill level,” Keating says.

Technology is a burgeoning industry for the Hudson Valley with digital entrepreneurs like Foursquare’s Dennis Crowley moving to the area and local tech companies like Evolving Media Network, which Kaposhilin co-founded in 2003, ever-expanding. “The tech industry is a burgeoning part of our local economy as more and more tech professionals are discovering Ulster County’s low cost of doing business and high quality of life,” says Ulster County Executive Mike Hein. “The Ulster County Economic Development Alliance was one of the first sponsors of the Catskill Conf and we have seen it grow every year, just as the Hudson Valley Tech Meet-up is continuing to grow and now hosts hundreds of tech insiders at each meeting. From 2009 to 2015 Ulster County’s tech sector grew by over 30 percent, and we look forward to it continuing to grow tremendously as business leaders, entrepreneurs and young professionals learn that Ulster County is the best place anywhere to live, work, and raise a family.”

Kaposhilin and Keating work together at Evolving Media Network, a web development and software company in Kingston. They, along with others, also coordinate Hudson Valley Tech Meetup. In all the ways they work to bring people together, Catskills Conf’s organizers endeavor to shed some of the tech industry’s inaccessibility and isolation and to amplify camaraderie and opportunity.

“Ruby on Rails [the programming language and framework in which modern web applications are built] didn’t exist until 2004-2005, and the ways you can make software are constantly changing,” Kaposhilin muses. “No one is an expert on it all. That’s contributed to this environment in web development where nobody is wrong; your ideas, your passion for consistently improving skills and work, create an encouraging and welcoming environment. That’s a unique thing in software. I’m constantly interested and amazed by how willing developers are to share.”

Catskills Conf has a bit of a TedTalk feel. Hand-selected speakers either showcase a philosophy, or share the ups and downs of their creative process. They might highlight a cool side project they started outside of work and reveal how they balanced their time, or talk about a philosophy they’re developing. “You’re learning from other people’s experience,” Keating says. “It’s meant to be inspirational.” 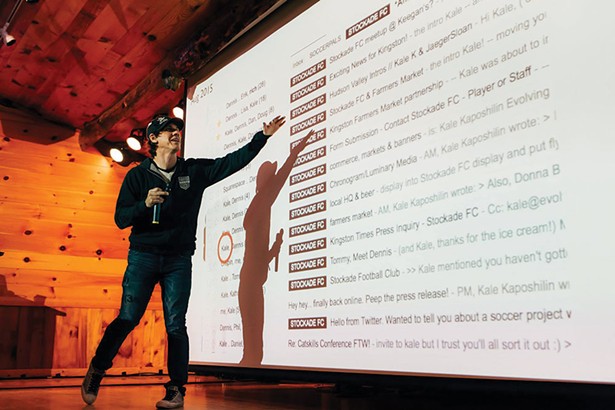 For the organizers, that means Catskills Conf needs to be a safe space for sharing, so presenting a diversity of approaches is a major priority. In the first two years, speakers were invited by the organizers, and the initial lineups prominently featured people from underrepresented areas in tech. Keating says this was designed to build trust at Catskills Conf. While tech and social media companies march in pride parades and offer trainings to battle covert bias, Silicon Valley is still perceived as a white guy’s game, and that’s often reflected in the speakers at tech conferences. Yet, conferences dedicated to diversity are also cropping up as the industry becomes more mindful: Google’s Women Techmakers program honors International Women’s Day while highlighting the talents of women in technology; AlterConf is a traveling conference series that provides safe opportunities for marginalized people and those who support them in the tech and gaming industries. Catskills Conf is aligned with that spirit. This year, the application process was opened, and the 2017 program was curated from some 20 proposals offering a variety of perspectives.

“Particularly in start-up culture, young men are running the industry,” explains Jameson Hampton (who prefers the gender-neutral pronouns they/them). Hampton is a software engineer for Agrilyst, a Brooklyn-based agricultural startup focusing on farm management and data analysis for indoor farms and greenhouses. Last year, when Hampton attended Catskills Conf, they enjoyed the feeling of intimacy that develops when spending a weekend in the woods with other people interested in learning or in experiencing something new. “The entire time I’m there, I’m interacting with other attendees,” Hampton describes. “In the day, I learn about tech stuff. In the evening, I learn about the other people I’m with. It’s a very rounded experience in that way. I learned things I wouldn’t expect to at a tech conference—things I wanted to learn.” Like plant identification and picking mint to make tea. At the campfire in the evening, they would chat with speakers. “There weren’t tiers of people. It was just people that were there,” Hampton says. “We knew we were going to be there all weekend with each other and came ready to share things about ourselves.”

In that spirit, Hampton offered a Lightning Talk to daylight the degradations that people use casually in talking about the transgender community. The Lightning Talks are a sort of open mic moment where anyone can speak for five minutes. It’s a facet of Catskills Conf’s fun-loving, risk-taking vibe. Hampton’s Lightning Talk experience was so positive, it opened a door. They’ve been averaging a conference each month for the better part of 2017, speaking at RailsConf and Mongo DB World in Chicago this past summer.

In October, Hampton will be back at Catskills Conf to present “There is no Spoon? Understanding Spoon Theory and Preventing Burnout.” Spoon theory is a social metaphor for the amount of energy a person has in a day. Coined specifically for people with chronic or mental illness, Hampton feels it’s important to talk about it in terms of preventing burnout in tech, particularly for populations who are daily dealing with stereotyping and limited expectations.

“I enjoy the hecticness of big tech conferences—so many people to meet, so many talks to attend, so many things going on all at once! Meeting a lot of people at conferences is something I really like and, as a speaker, if a lot of people attend my talk, that’s really rewarding for me, too. So, at conferences that are hectic, I feel like I’m packing in the value,” Hampton says. “The act of physically going to the Ashokan Center and being among nature for a weekend, it’s like I get to take a break from real life. It’s very relaxing, and I don’t normally describe tech conferences as relaxing.” Hampton is from Buffalo, and while Kaposhilin doesn’t have hard data, he estimates that the majority of Catskills Conf attendees are from outside the area—mostly New York or Los Angeles, and a few from Toronto or Germany.

“Just because you work in tech doesn’t mean you don’t want to be outside,” Keating adds. “Catskills Conf is professional and career-focused, but there’s also time to relax—something tech doesn’t do very well, especially at conferences. You don’t want to go back to work spent from a busy weekend conference. You want to learn new things but also be refreshed.”

That it happens in the Hudson Valley is an integral part of the event’s overall vision. Sharing the landscape, the food, and the adventurous spirit of the Hudson Valley is the reason Catskills Conf is held at the Ashokan Center. Built into the venue are age-old pursuits like hiking and blacksmithing. A presentation of birds of prey always packs the room with urban-based technologists excited to get so close to nature. The reality is, too, that low overhead costs combine with a strong sense of inclusive community and collaborative spirit to create fertile ground for the tech industry in the Hudson Valley, and Catskills Conf embodies that.

“We have such a wonderful quality of life here in the region,” says Kaposhilin. “We wanted to share that and make it accessible.” Like everything else in the Hudson Valley, people are going to do tech a little differently here.

From October 13 to 15, technologists and creators will gather at the Ashokan Center’s rural retreat for a program that’s been crafted to inspire. There are square dances, talks from diverse perspectives, workshops, and time to be outdoors. It’s all about having new experiences, meeting different people, and returning to work feeling energized. Here’s a curated list of the diverse flavors on menu at this year’s Catskills Conf experience.

Thalida Noel, a Senior Software Engineer at Etsy, will present a talk on creating inclusive, intersectional environments in tech for underrepresented groups. The focus will be on what organizations can do to make a more welcoming environment before the first employee hire.

Nibble your way through the foothills of the Catskill Mountains on Dina Falconi’s wild edibles walk. An herbalist, forager, and author, Falconi’s most recent book is Foraging & Feasting: A Field Guide and Wild Food Cookbook.

Each year at Catskills Conf, attendees respond creatively to the three-day event. Last year, Jonathan Mann presented a new, original song each day. This year, Mandy Moore of the podcast “Greater than Code” will be attending. Her podcast provides a platform for the voices of underrepresented groups in tech and for developing new ideas around what it means to be a technologist, beyond the coding. She’ll be doing field correspondence, interviewing participants on what they’re taking away.

Catskills Conf ends on a Sunday, just as the Ashokan Center’s Fall Family Fun Fest kicks off. Conf attendees can stick around for nature hikes, hayrides, food, crafts, and live music with Ashokan’s own Jay Ungar and Molly Mason and friends. CatskillsConf.com

The original print version of this article was titled:
"A Deep Dive in the Woods"