Holly George-Warren Rocks Around the Clock 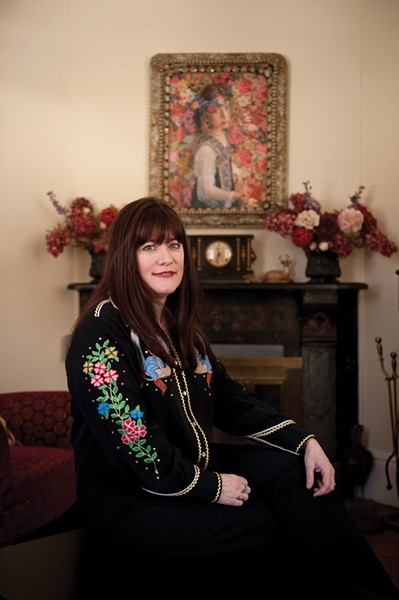 Holly George-Warren gets out of her blue Mini Cooper in front of the Phoenicia Belle Bed & Breakfast, surveying a muddy Main Street full of snowplows and bulldozers. “Snow-moving day in Phoenicia, the perfect time for a photo shoot,” she says with a grin.

George-Warren is one of those infectiously energetic people who lights up any room she enters. Beneath her fur-trimmed hat and winter coat, her getup is pure vintage cowgirl: embroidered western shirt twinkling with rhinestones, black cowboy boots with multicolored cutouts. It’s appropriate garb for the author of The Cowgirl Way

(Houghton Mifflin, 2010) and co-author of How the West Was Worn

As “Holly Hemlock,” guitarist of ’80s cult band Das FÜrlines, she opened for Frank Zappa and played CBGB in costumes befitting the group’s Teutonic “all-girl punk rock polka band” aesthetic. And since 1996, she’s had the enviable challenge of deciding what to wear to the Rock and Roll Hall of Fame’s induction ceremonies, for which she compiles an annual book of tributes and essays.

, just released in softcover by Collins Design. It was a massive project. George-Warren screened hundreds of hours of footage to cull excerpts from live speeches, edited induction book essays, and assembled a mix of stock shots and photos from induction ceremonies. Her first draft ran 130,000 words, which she “had to edit like a documentary film” to fit the designer’s template.

Luckily, she was already an old hand at writing and editing music retrospectives such as Grateful Dead 365

(Abrams, 2007) and more than 30 other titles, including Martin Scorsese Presents the Blues (HarperCollins, 2003) and two editions of the The Rolling Stone Encyclopedia of Rock & Roll

“I was a music addict in third grade,” says George-Warren, who grew up in Asheville, North Carolina, and still sports a light Southern twang. “It was the Golden Age of AM radio, the mid-’60s, and I found out that at night I could tune my baby-blue pastel clock radio to get WLS in Chicago and WABC in New York. It was an eclectic mix: Johnny Cash, the Beatles, Bob Dylan, the Supremes. I started buying 45s like crazy.” She also learned ukulele and guitar; her first band was called the Flamingos. “It was all about the costumes,” she laughs. “We did a lot of lip-synching.”

In school, she liked writing and “making little magazines.” But when she entered the University of North Carolina at Chapel Hill, music journalism was not on her mind. “Originally, I thought about going to law school,” she asserts. “I wanted to save the world.” Then she took a semester off to travel in Europe and fell in love with the London punk scene. A 1977 visit to New York’s East Village extinguished her law career.

Two years later, George-Warren moved to New York with the Cigarettes, “one of North Carolina’s only punk bands.” She supported herself by waitressing at a kosher nightclub called El Avram (“I was the only shiksa working there”) and the Honey Tree Pub. Across the street was a methadone clinic frequented by one of George-Warren’s idols, Velvet Underground chanteuse Nico. “She’d come in afterwards for amaretto cheesecake. I lent her 20 bucks.” Finally, the young waitress got up the nerve to propose an interview; Nico agreed.

George-Warren, who was already writing short fiction for underground zines with names like Heroin Addict and Dumb Fucker, started to write more about music, eventually working for the Village Voice and Rolling Stone. “I was the weirdo hillbilly cowgirl, so I got to write about Nick Cave and Johnny Cash,” she reports. “And Tammy Wynette and Loretta Lynn—all the country greats.”

In August 1987, Das FÜrlines double-billed with the Fleshtones at an East Hampton barbecue, and “Holly Hemlock” hit it off with Fleshtones bass player and fellow Southerner Robert Burke Warren. One of their first dates was at Wigstock, the legendary downtown dragfest. They wound up sharing a railroad flat on St. Marks and Avenue A, where their son Jack was born.

“His playground was Tompkins Square Park,” says George-Warren. She had a day job at Rolling Stone and Burke Warren worked nights, spending daytimes with Jack. “Hookers would come up to [Robert] and say, ‘Yo, where’s the mama?’” George-Warren recalls. She used to joke that her husband should become an East Village version of Raffi, “called Roughie, singing songs about junkies and drag queens. And look what’s happened!” She calls Burke Warren’s transformation from downtown punk bassist to upstate kids’ music czar Uncle Rock “totally bizarre and organic.”

The gateway drug was a weekend cabin in Chichester. “We used to drive by the Phoenicia school and think, ‘Someday we’ll have a kid, someday we’ll live here full-time and he’ll go to that school,’” George-Warren says.

That day came in 2001, which George-Warren calls “the worst year of my life.” Her parents died 10 weeks apart, and in September, she witnessed the Twin Towers’ collapse. “Robert had to bartend that night,” she says. “People were just coming in and gulping bottles. All we wanted to do was run away upstate.”

Then she landed a book deal for Cowboy: How Hollywood Invented the Wild West

(Readers Digest Books, 2002). “It was such an antidote. We’d come up to Chichester and watch nonstop vintage westerns, these clear-cut morality tales.” By December, they’d left St. Marks Place for Phoenicia.

The idiosyncratically funky town has been home ever since. After the photo shoot, George-Warren suggests a stroll to Mama’s Boy Café and Espresso Bar, where she’s warmly welcomed by proprietor Michael Koegel and two white-muzzled dogs. She orders a cup of chili and a sausage biscuit, grabbing a Mexican Coke from the fridge. “That’s a sugar Coke,” she drawls, settling down to continue the interview.

In George-Warren’s world, everything is connected to everything else. She met Mystery Spot owner and artist Laura Levine, with whom she’s done two children’s books, on a downtown photo shoot for the band Clambake. Woodstocker Elliott Landy photographed Das FÜrlines for People. And local legend Michael Lang chose George-Warren to collaborate on his bestselling memoir The Road to Woodstock

Though Lang was the ultimate Woodstock insider, George-Warren read “all the other books” and newspaper accounts from 1969, interviewing many behind-the-scenes players. Research seems to galvanize her. She calls her lauded biography Public Cowboy No. 1: The Life and Times of Gene Autry

(Oxford University Press, 2007) “the hardest thing I’ve ever done.” When she interviewed the nona-genarian star for the New York Times in 1997, she arrived dressed in top-to-toe vintage western wear. Autry was charmed, asking, “Honey, didja bring a Kodak so you can get a pitchure?” George-Warren smiles wistfully as she channels his twang. “We were total kindred spirits.”

That interview would be Autry’s last. His widow gave George-Warren full access to his personal papers, allowing the author to paint a three-dimensional portrait of the man in the white hat with a hard-drinking dark side. She interviewed nearly 100 people, crisscrossing the country for years.

Not that there’s anything wrong with that. The Warrens love a good road trip—they brought five-week-old Jack on a Southern-roots cruise with visits to two sets of grandparents, Hank Williams’ grave, and former Box Tops frontman Alex Chilton, whose George-Warren biography is due out in 2012.

An avid reader of musical memoirs, she raves about Patti Smith’s recent Just Kids, remembering Smith’s life-changing concert at Chapel Hill during her student days. Smith also provided one of George-Warren’s favorite Rock and Roll Hall of Fame induction memories, when the singer auoted her late mother’s request to “sing my favorite song, the one I liked to vacuum to” before launching into “Rock’n’Roll Nigger.”

This year’s inductees include Dr. John, Tom Waits, Alice Cooper, Darlene Love, and Neil Diamond. George-Warren is deadlining on the induction book for the March 14 ceremony, with essays by Johnny Depp on the Beat generation, Neil Gaiman on Alice Cooper, and Rob Zombie on shock rock.

“They can induct me into the Lunatics Hall of Fame,” says the hard-working author, who’s also written award-winning liner notes, coproduced a Grammy-nominated CD set, consulted at Western museums, and teaches an arts journalism course at SUNY New Paltz. Indeed, the only time she seems to be at a loss for words is when asked what she does to relax. After a very long pause, she offers that she enjoys watching old movies, and—another long pause—staring out at the snow. “I probably stay too busy,” George-Warren concedes.
This may be why she describes her overstuffed third-floor writing studio as “a disaster area.” If she ever finds time to clean it out, an adjoining room will house her packrat collection of music memorabilia, Western treasures, and vintage clothes from her punk past.

Holly George-Warren will be reading with fellow music writers Will Hermes and Tony Fletcher on Sunday, March 27 from 3:30-5:30 at Inquiring Minds in Saugerties in the Readings from Up Saugerties Way series. The event is titled "Even Cowgirls Get the Muse: Music and Culture from London to Nashville."
Inquiring Mind Coffee Shop and Bookstore
65 Partition Street Saugerties, NY. 845-246-5775