December 30, 2006
Last Updated: 08/13/2013 4:32 pm
comment
Near Stewart Airport, inside a four-story skylit building the size of a football field, a man sits at a metal table polishing a section of a cast stainless-steel head for sculptor Rona Pondick. The front of the sculpture is a life mask, a cast of Pondick's face, and to the bodiless head will be added castings of the artist's thumb and second toe. For the past eight years or so, Pondick has entrusted Master Craftsman Jerry Tobin, and other craftspeople at the Polich Art Works foundry, to assist her in creating intriguing, amazingly durable pieces of three-dimensional art.
On the vast, open floor, sculptures by Jeff Koons, Roy Lichtenstein, and Tom Otterness await the next step, whether to be waxed, dipped, cast, finished, patinated, or restored. Large architectural castings also take up space, including a massive bronze façade that will be finished to give the appearance of water flowing over its surface. Once completed, it will be shipped to Osaka, Japan, where it will gild the front of a Harry Winston jewelry store.

With sparks flying from welding torches, hammers pounding, and machines rumbling, the foundry resembles a giant toymaker's workshop, with one-of-a-kind, expensive pieces of art instead of dolls and model trains. When CEO Dick Polich talks about the excitement of working at the foundry, he compares it to being "like Christmas every day."

Growing up as the son of Yugoslavian immigrants, near Cicero, Illinois, Polich was drawn simultaneously to making art and excelling in business. He remembers living in his "little house on the west side of Chicago" and being fascinated with the attenuated sculpture of Swiss artist Alberto Giacometti. He would make "things with hangers and dripping wax on them. I was doing that when I was 14, 15, something like that."

After earning a degree in Economics from Yale in '54, Polich worked in the engineered castings division for the American Brake Shoe Company, which manufactured jet engine parts and tire molds. A few years later, he wondered if "there was something more going on," and joined the Navy. Polich recalls the relative ease of day-to-day life in the Navy. "After eight hours, somebody comes and says, 'Okay, I'm here now. You can [leave] now.' Suddenly I had more time than I could remember having anywhere else, and I decided to do some painting and drawing. I decided to be an architect."

Polich was accepted at Harvard in the Graduate School of Design. "That was a disaster, a disaster in the sense that I really had no artistic training. You'd work on a problem for what seemed like a month, and then the faculty would come and destroy it. I took it all so personally. Anyway, I left."

Around that time, Polich met Merton Flemings, an inventor and assistant professor at the Massachusetts Institute of Technology who was interested in bringing a science-based approach to metal casting research as well as in finding ways to unite art and technology. Polich studied with Flemings and others at MIT and received his Master's degree there in metallurgy in 1965.

Polich took a job at the Bendix Corporation and became general manager of the foundry division, which was involved in making weapons systems and aircraft parts. "I did that for a couple of years. Again, I had to wonder about what was going on and what I was doing. I decided to start an art foundry."

In 1968, with the help of fellow MIT graduate Sandy Saunders, Polich set up his first foundry in a Quonset hut that Saunders's parents owned in Cold Spring. As the business expanded and bigger facilities were needed, the company moved to Peekskill, then Beacon. At one point, Polich thought, "Hey, we're doing work with metal, metallics, let's call the place Tallix."

In its simplest form, the craft of casting involves making a mold of an object, filling that mold with a liquid that will later solidify, and removing the mold to reveal an exact, durable copy of the original.


To make a mold of a hand, for example, a polymer glove, or mold, is first created. It is then removed from the hand, and any lines "fixed" (essentially, erased) before the glove is filled with wax. Once a wax replica is made, a second mold is crafted—this time, out of ceramic. The ceramic shells are made with as many as seven or eight layers, each dipped into a ceramic slurry and then dusted with sand. For the ceramic shell process, two systems are created. One is for handling and supporting the fragile wax replica. The other is a plumbing system that lets wax out of the mold and metal back in. Since metal shrinks, or reduces its volume, as it cools, that loss must be compensated for by the plumbing system. Otherwise, the mold will not fill evenly, and the sculpture will be incomplete.

While some artists bring in their work and leave it, others become interested in the process itself. According to Polich, one artist who became passionately involved was Nancy Graves. Graves, he says, "was really interested in the transformative powers of the process, where we could take a fragile leaf and turn it into something permanent that she could paint, and make colorful, and still make it have the very obvious, strong resemblance to what is was. Before she found us, she was trying to make sculpture, trying to make these fragile things, and it was so frustrating, so difficult."

Another artist intrigued by the process was Frank Stella. "He was always interested in what could be cast, but he was also interested in how [it could be cast]. He was a guy who started using the casting systems, putting those plumbing systems, on them. He said that it was part of making the sculpture. Frank is the only guy that would do that, would really use everything. He never wanted anyone to show him how to do anything. He wanted to learn, or do it himself, with that kind of newness, in the hopes that he might change it, or do it in a way that no one had ever done it before."

The largest casting ever made at the foundry was for Stella—a 75,000-pound abstract, stainless-steel artwork commissioned by the Pohang Steel Company in Seoul, Korea. Some of the smallest have been made for Rona Pondick, who employs computer scanning to create different-sized replicas of her head and other body parts. Polich remembers the foundry casting a real tree and welding tiny heads to it, so that when a viewer saw the work from a distance, the objects resembled real fruit, "but then when you get close, you realize it's a portrait."

Pondick has taken her work to Polich Art Works for almost a decade because, she says, "It's one of the few foundries where all of the people on the floor take tremendous pride in their work. I feel like I'm working with the top people in the business. Someone like Jerry Tobin is just amazing. There isn't a piece of mine that doesn't go through him."

Polich seems to embrace all kinds of challenges, not the least of which involve maintaining a clear vision of the company's past and future. In 1990, when the number of foundry workers reached almost 200, Polich sold Tallix to an outfit that was intent on creating an "art conglomerate," a concept that Polich recognized, in hindsight, to be an oxymoron.

At first, as president of the new international company, overseeing foundries in the US and England, Polich was excited and energized. Then the market changed, and the "money guys" and artisans had different ideas on how to conduct business.

Polich left Tallix in 1995 and, soon after, opened Polich Art Works in a former metal fabricating plant near the airport. In late October, Polich and Tallix officially reunited. The Tallix foundry in Beacon will close, and Polich Tallix will reside under one roof.

According to Polich, between 60 and 70 percent of the castings made by the company are bronze, with the balance constituting stainless steel, aluminum, silver, and gold. Although the industry has shrunk somewhat, partly due to work being outsourced to Asia, Polich sees the market for larger architectural work growing, now that designers can use the computer to design increasingly complex structures, including entire buildings. Polich hopes that the newly combined foundry will do between $6 and 10 million dollars in business in the coming year.

When asked about metal's appeal, he refers to its beauty, luster, and permanence, as well its ability to assume many different shapes. He adds, "In the foundry business, there is the thing of taking this hard, obdurate material and making it fluid. And then, in addition, there are the mechanics of doing it, the feel of the heat, the noise of the furnace. It's a very sensual thing. Then there's the excitement: 'Did we do it right?' And so every day is like Christmas."

He also notes the danger of it. "When you melt steel, and steel is hot at 3,200 degrees Fahrenheit, and if you look at, [you need] really dark glasses, you have to wear protective clothing, or it would set you on fire. And then there's the teamwork of handling two tons of molten steel. The movements are balletic, because it's dangerous. Everyone's looking at everybody, and everyone's trying to guess where we are, and we gotta get it [right], because it cools very fast once you take it out of the furnace. It's very dramatic. And once you've seen it, you say, 'Wow.'"

Portfolios of artists working with Polich Art Works can be viewed at www.polich.com. 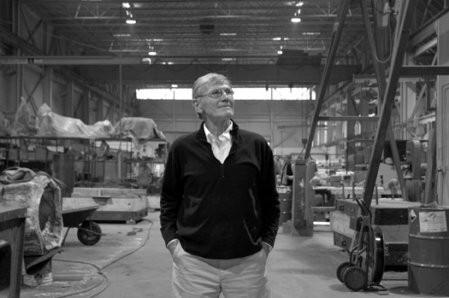