Carolee Schneemann: Within and Beyond the Premises | Visual Art | Hudson Valley | Chronogram Magazine

Carolee Schneemann: Within and Beyond the Premises

For 40 years now, Carolee Schneemann has sought, through her multimedia artworks, to reunite mind and body, those long-estranged siblings of Western thought. It is, of course, the former that is given privileged status in the dyad—in Christianity, it is Soul, not Body, that wins the big prize. But Schneemann sees things differently. For her, it is through our corporeal experience of the world that we gain real knowledge of it. In her work, the body becomes more than subject matter, as it has been historically in Western art. Rather, it becomes the very material out of which the work comes into being, uniting aspects of performance with the visual arts in ways that are now commonplace to any visitor to the Whitney Biennial, galleries in Chelsea, or, for that matter, the studios of undergraduate art students.

The exhibition at the Samuel Dorsky Museum at SUNY New Paltz offers a sort of “miniretrospective” of this extraordinarily influential artist’s work. Echoes of the work of subsequent generations of artists whose concerns run parallel to hers can be felt reverberating throughout the exhibition—names such as Janine Antoni, Matthew Barney, Tracey Emin, Paul McCarthy, and Kiki Smith come especially to mind.

Even in Scheemann’s early works, her interest in the body—as opposed to the figure—is evident. Expressionistic paintings from the early `60s reflective of the artist’s feeling for color and painterly handling demonstrate an assimilation of the lessons of a previous generation of painters including Willem de Kooning and, especially, Arshile Gorky. As in Gorky’s work, allusions to the body and its processes are made through ambiguities of form that only just begin to coalesce into recognition before they melt back into the stuff of paint. Schneemann is a natural painter, but, like many women of her generation, she seems to have felt limited by painting’s master narrative, its perceived masculinism, and the privileging of the eye in its reception.

In 1964, Schneemann staged a performance that became seminal to her oeuvre. Titled Meat Joy, the work was a group performance that included, in addition to the nude or mostly nude performers: raw fish, chickens, sausages, wet paint, plastic, rope, and shredded scrap paper. A sort of human-collage performed in real time, the work took the language of painting and collage into real space as it reveled in a kind of pagan ecstasy. Works at the Dorsky such as Fur Wheel of 1962 and Untitled (Four Fur Cutting Boards) of 1963 also reflect this early desire to push painting into real space. Another work featured in the Dorsky, Up to and Including Her Limits of 1973-76, makes explicit the relationship of the body to the mark. A kind of performance-installation, the work offers the viewer the artifactual evidence of the artist’s body in space; what looks like a large scale abstract-expressionistic drawing constitutes the remains of a performance that is documented in still and moving pictures. In addition to this documentation is displayed the actual harness from which the artist’s naked body swung as she dragged colored crayons across the surface of the paper in a seemingly helpless surrender of her body to the process.

In Correspondence Course of 1980-83, the viewer is offered a series of black-and-white photos of the artist, nude, her grotesquely painted face mugging for the camera. In several photos, she holds a feather duster in various bodily orifices. Accompanying the photos are letters to and from the artist, documenting the sort of correspondence out of which “the artworld” emerges. In one letter, students of the School of Visual Arts in Manhattan ask, “What if any is the dividing line or factor between using one’s body for performance & exhibitionism?” and “Your work can only be produced by a woman (e.g. blood-stained page; scroll that is taken from vagina), but how does that necessarily make it feminist art?” These are excellent questions indeed, and the artist is clever enough not to answer them. Rather, she converts them into art.

“Carolee Schneemann: Within and Beyond the Premises” will be exhibited through July 25 at the Dorsky Museum at SUNY New Paltz. On March 3, at 7 pm, Schneemann will offer a “performative lecture” in Lecture Center 102 on the SUNY New Paltz campus. On April 10, from 2 to 4pm, a panel discussion of the artist’s work with Emily Caigan, Maura Reilly, Brian Wallace, Linda Weintraub, and Kenneth White and moderated by Patricia Phillips will be held at the museum. From 5 to 7pm, selected films and videos by Schneemann will be screened at the Rosendale Theater. (845) 257-3844;
www.newpaltz.edu/museum. 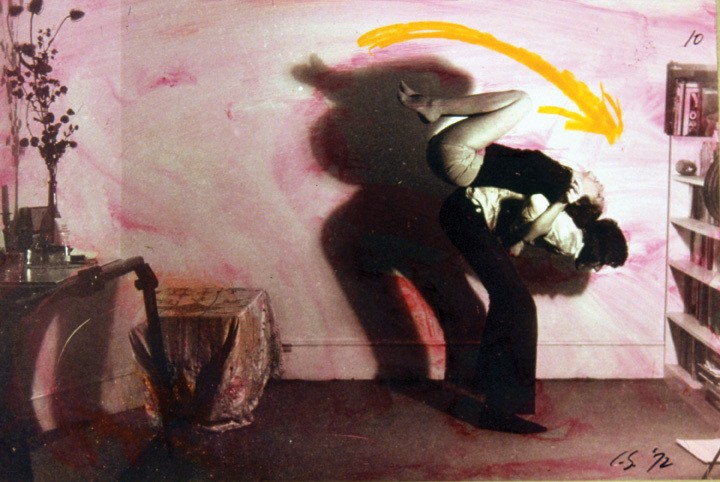 “Anonymous” at the Dorsky Museum

Thoughts of Home at the Dorsky Museum

Whatever Floats Your Art