Can you recall your last restaurant experience before the novel coronavirus struck? Not just where you went and what you ate, but how you felt walking in the door—perhaps excited to try a new spot or welcomed back as you approached a family favorite. Were you seated an arm's-reach from an intimate couple, the aroma of their grilled steaks giving you salad remorse? Could you see staff in a crowded kitchen busily weaving between one another?

It's only been a few months since restaurants were ordered to cease dine-in service, though it feels much longer. But time goes on, curves flatten, and government-issued small-business loans only go so far. As restaurants look to reopening, we move toward regaining that sense of normalcy that we all took for granted—but of course, it won't be the same.

Though suggestions have been constantly evolving, especially as officials watch the results of other states reopening, the most-recommended guidelines for welcoming back patrons are heavy on continued distancing and germ awareness. Despite the values of our eco-conscious region, disposables are in: plates, utensils, linens, and menus—the latter of which might just become relegated to phone apps that allow online ordering, touch-free payment, and alerts when tables are ready (it's time to move beyond that buzzing black pager, anyway). Tables and barstools would see greater elbow room between them, while staff would wear face coverings to prevent the spread of germs, concurrently removing the warmth of a simpatico server's smile, no matter how fun the fabric print.

"The most important factor in reopening is keeping our employees and our patrons safe. If that means restrictions have to be in place, that's what has to happen," says Michael Bonura, principal of Bonura Hospitality. With nearly 50 years of experience in the hospitality industry, the group owns popular restaurants like Blu Pointe in Newburgh and Shadows on the Hudson in Poughkeepsie that have been offering limited to-go and curbside pickup. Also included in Bonura Hospitality are lauded event venues Anthony's Pier 9, The Grandview, and West Hills Country Club, among others, whose wedding-season was completely thrown off; as of May 20, they had to move the dates of almost 200 spring and summer weddings.

Bonura was part of a collaboration to create regional guidelines for a phased reopening of the restaurant and catering industry within the Mid-Hudson region. Additional input was provided by the Leading Caterers of America, Dutchess County Regional Chamber of Commerce, and Orange County Chamber of Commerce.

In the document, the initial phase starts with strict physical distancing: tables placed a minimum of six feet apart; a 50-percent maximum occupancy; no more than six guests per table; and no meetings, ceremonies, dancing, or seating or standing at bars. Employees would undergo daily health screenings and enhanced hygiene guidelines including required face coverings. Cleaning processes would include regular sanitizing of frequent-touch surfaces, single-use menus, no self-serve food, and extra hand sanitizer. Last, no symptomatic guests would be admitted and guest logs are suggested to allow contact tracing.

The second phase eases the guidelines with a maximum of eight guests per table, bar seating at six feet apart, and dancing allowed with distancing in place. The third phase allows for increased occupancy up to 75 percent and relaxes six-foot distancing if law allows. The final phase, listed as the New Normal, allows for 100-percent capacity and relaxed physical distancing guidelines, but keeps enhanced hygiene and sanitation protocols intact.

It might seem overwhelming; the idea of a dancing ban sounds as though it comes straight from the plot of an Off-Broadway production. But with the rapid pace of the pandemic and the uncertainty we still face—including the looming threat of an autumn recurrence, the true concern is safety in the wake of the century's most significant health scare; one that forced the region into uncharted territory.

Beyond working on the reopening guide, Bonura says his group's main focus has been on taking care of staff; between the restaurants and event venues, the group laid off more than 500 employees. "If you asked me in February if I thought we'd lay off a single employee outside of a known seasonality situation, I'd have called you crazy," Bonura explains. "The first thing we did was open up to serve free meals to all of our laid-off staff and their families. We didn't have hours for them to work, but we refused to see any of them or their families going hungry. Soon we'll be able to bring back our staff to wintertime levels. This time of year, we'd typically have nearly double those staffing levels, but I certainly don't expect to get to that seasonal high level this year. We expect to open with maybe 25 percent of expected volume; we'll have half of our tables and expect to only fill half of them. Hopefully volume grows, but that's our realistic expectation."

The Depth of the Hole

The past two months have seen a startling reversal for an industry that had become a linchpin of the tourism-based regional economy. Over the past two decades, the Hudson Valley has leveraged its proximity to New York City, its abundance of agricultural resources, and its culinary talent to develop a fine-dining culture built around fresh, local ingredients and farm-to-table experiences. Fine dining, as part of the larger, more traditional food and beverage sector, represents a major regional employment sector. A 2010 report by the Mid-Hudson Regional Economic Development Council found that the food and beverage sector employed 53,000 people in Columbia, Greene, Ulster, Dutchess, Orange, Putnam, Sullivan, Westchester, and Rockland counties, a 23-percent increase from 2000. By 2016, that number had grown to 67,000. The sector is ranked fourth in regional employment statistics, behind health care, government services, and retail. In Ulster County, where some 464 establishments employ 5,162 workers, the food and beverage sector grew by more than 10 percent between 2014 and 2018, growth that wasn't projected to slow down before the pandemic hit. 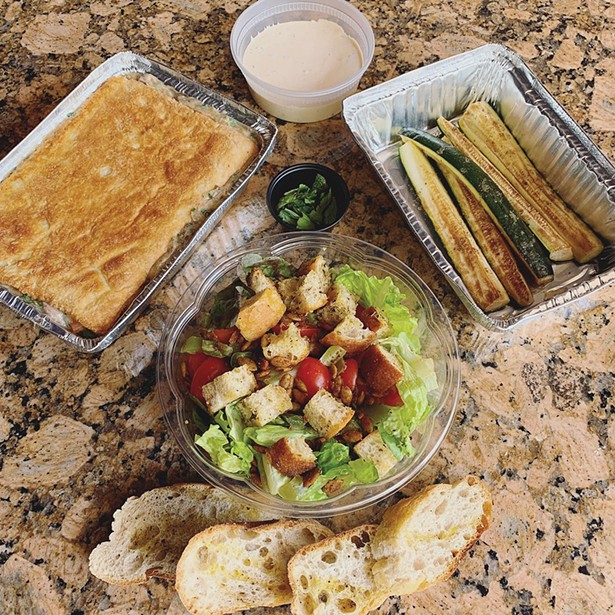 According to Melissa Fleischut, president and CEO of the New York State Restaurant Association, sales had already begun to drop in March as more and more New Yorkers began staying home, out of the virus's path. Then the bottom fell out with Cuomo's shutdown order. A survey conducted by the association, released on April 21, shows the depth of the hole the industry has found itself in. Statewide restaurants lost $3.6 billion in sales, while 80 percent of the sector's workforce has been laid off since March. The survey found that overall sales were down 79 percent in the first 10 days of April compared to the same period last year. Forty-nine percent of the 550 New York restaurants surveyed planned to shut down entirely for at least 30 days. Eleven percent reported that they had or would shortly close, with no plans to reopen. Fleischut, meanwhile, said that by her own estimation, 25 to 30 percent of restaurants that close down will never reopen. She believes that many of the association's members are treading water, getting by on takeout and delivery services that may not be sustainable for long.

"If you don't have the same volume coming through your restaurant, how do you make enough to make it worthwhile?" she says. "I think a lot of places will eventually decide that takeout and delivery is just not working and they'll shut down."

An App for Appetizers

For smaller restaurants, like New Paltz's longstanding Main Street Bistro—an intimate space whose stellar breakfast menu has been known to lure throngs of hungry patrons and hungover college students each weekend—the new norms have owners scrambling to come up with innovative solutions. For instance, the bistro's owner, Doug Thompson, decided to set up an online order form through the Toast Tab app, as a way to streamline menus and takeout services. "We've spent a lot of time in webinars to set the bistro up in the safest way possible for our guests and staff," Thompson says. "The app is mainly for ordering takeout through pickup or delivery, allowing customers to pay beforehand and letting them request condiments and prewrapped silverware in advance. It may also be used to replace our in-house menus so we can minimize the number of items that need to be sanitized."

With a small entryway, usually those waiting for a table at the bistro are relegated to forming crowds just outside of its doors and on the sidewalk. To encourage safe distancing and reduce crowding, Thompson says he plans to set up a system where guests receive texts when their table is ready; he's considering taking reservations, as well. "This is going to be a challenge for all businesses, but to survive we have to adapt," he says.

But space regulations produce other challenges for restaurant owners—reduced crowds lower the amount of income they can make, while food supply shortages have raised costs.

"It's been particularly challenging to source certain items like cured pork products and eggs, and, in general, food costs are through the roof," says Mike Kelly, executive chef and owner of Liberty Street Bistro in Newburgh. "Our biggest challenges have been what probably every other restaurant is facing at the moment: Mounting bills that still need to be paid by margins even thinner than they were before; not being able to have our entire staff back at work and missing out on the camaraderie associated with that; and having to function in uncertain times and on an unknown timeline, making it impossible to plan more than a few days at a time."

Kelly believes it will take a significant amount of time to recover financially, but he's optimistic. "We've realized our need to be adaptable; we've weathered literal storms in the past, having to close for a few days at a time, but never anything close to this," he says, referencing the tornado that swept through the City of Newburgh in the spring of 2018. "Now we know we need to be flexible to meet whatever current conditions dictate, and those conditions may turn on a dime."

Though he's eager to get back to business as usual, whatever that entails, Kelly says the safety and comfort of employees and guests come first. "We are constantly monitoring the situation and adhering to best practices put forth by the state, the CDC, and the FDA, among other governing bodies," he says. "When we're able to open again for inside dining, we'll be following whatever current protocols are being recommended at the time, including properly-spaced and reduced seating capacity, hand sanitizing stations for our guests, and frequent disinfecting of any shared spaces and surfaces. We want to ensure our guests and employees feel safe and comfortable dining and working with us and hope the need for social distancing and hypervigilance wanes with time. When it's safe to do so, we want to get back to having our dining room and lounge filled to its pre-pandemic capacity."

But even with strictly adhered-to guidelines, the initial days after reopening are filled with uncertainty. Will people come out to eat? They will. Will it be uncomfortable? At first, probably. But some of the best things in life are uncomfortable in the beginning, from new shoes to becoming a parent to the first night in a new home. We've seen firsthand how resilient Valley restaurateurs can be, and how determined they are to thrive. But we hungry residents play an important part in the next step: Our ability to adapt and work alongside business owners to maintain safety protocols can help keep our communities safe and our region's beloved bistros, bars, cafes, and restaurants afloat.