Call It What It Is | Monthly Forecast | Hudson Valley | Chronogram Magazine

Call It What It Is

August 26, 2011
Last Updated: 08/07/2013 4:26 pm
comment
So here we are, at the 10-year mark of the September 11 incident. Wars are still being fought, there is chaos in the Middle East, and everyone who boards an airplane or makes a phone call is still a potential terrorist. Politicians will lay wreaths and many will take the opportunity to put a little more yeast in the brew of hatred, but I wonder what we’ve learned. And I wonder who is asking questions about what happened on September 11, 2001, why it happened, and how.

I’m one of the people who doubted the official story of September 11 before I even heard it. Once I started reading the explanations, I knew there were problems with everything that was being said. I anticipated that I would be involved in a long investigation, and I have. My first breakthrough came seeing the astrology for the incident. Reading that chart, I warned that the “secret enemy” who had done this horrid thing would be morphing to suit political convenience, and had an oddly intimate relationship to the government.

I had my second breakthrough looking at the picture above, which is a Department of Defense photo of the Pentagon crime scene from September 14, 2001. This came into my hands six months after the incident, in early March 2002. Maybe you saw the e-mail titled “Find the Boeing” published by the French website Asile.org that passed around the link. It’s easy to search online. The premise of “Find the Boeing” was, okay, if this event at the Pentagon is an airplane crash, then where’s the airplane? Where did it strike? Where did the 100 tons of composite aluminum and titanium go? Where is the impression of the wings, and those enormous jets? What about all the fuel on a plane that was bound for the West Coast? How come that big pile of rubble isn’t a burned-out bonfire?

During March 2002, I studied this photo night and day for a week (I had fewer deadlines back then). At the end of the week, one really weird thing stood out. How is it possible that an airplane hit that building at a minimum of 250 miles per hour, but all the rubble collapsed outward? When you see a photo of a car that’s been driven through the wall of a house, you don’t expect to see the debris all over the lawn. Most of it plunges inward and follows the direction of travel of the car. Here, the wall looks like it tumbled outward, which is what it did. This debris goes in the wrong direction— that is, if something large from the outside plunged in.

After I did this work, studying dozens of other photos, I knew there was a problem with the official story. Through the first week after the September 11 incident, I consoled myself by listening to Steve Inskeep on NPR. He had been standing next to the Pentagon for the first three days after whatever happened there. I knew and trusted Steve from my days covering the state capital, and I clung to his sane, moderated voice; I thought I would ask him. Steve was in Afghanistan when I called, but my phone rang six months later and—faithfully—he was returning my call. I told him what I was thinking and asked for his honest opinion. Was I crazy?

He told me that he was one of the first people at the Pentagon after whatever happened. He was called to the scene of an explosion—not an airplane crash. He said it didn’t look like an airplane crash, but then, not all of them do. However, he thought my theory was plausible and worth following up. I will save those stories for another time. While the Pentagon presents a mystery, it’s not the most interesting one.

By far, the most interesting and persistent mystery of September 11 is what happened to 7 World Trade Center. Most people don’t know that three towers of the World Trade Center fell down on September 11. We’ve all seen the two big Twin Towers fall down again and again, but there was a third—a 47-story structure called the Salomon Brothers Building. It was not hit by an airplane. Across the plaza from the Twin Towers, 7 World Trade Center suffered some damage when the two other towers fell, but not especially severe. There were some scattered fires in the building. Then at 5:20pm, it collapsed at near-free-fall speed into its foundation, landing in its footprint in just under seven seconds. The impressive thing is how it just elegantly cascades to the ground. It implodes and lands in a tidy heap. For that to happen, all 18 or so vertical beams would have to be cut at the same time.

There are lots of video clips of this on YouTube. There are clips of newscasters saying the building had fallen down when it was still standing; the most famous is the BBC live broadcast. On the local Fox News channel in DC, the reporters are saying it already fallen down while looking at a live feed of the New York skyline—then 7 World Trade Center collapses while they’re talking.

Building 7 was never part of the official September 11 inquiry. This is true despite the tenants of the building, including the FBI, the SEC, the IRS, the Secret Service, the New York City Office of Emergency Management, and a diversity of banks and insurance companies. If it’s true that World Trade Center 7 collapsed from some damage and a few fires, one would think that there would be a major investigation into the structural integrity of skyscrapers, because such a thing had never happened before.

In a PBS interview done for America Rebuilds, the one-year anniversary special, the owner of the building, Larry Silverstein, admits that one of the fire department commanders called him up and told him they had to pull the building—and he gave his consent to “pull it.” (This video is easily available on YouTube, and I purchased the original from PBS to make sure it wasn’t a fake.) The owner admits the building was demolished intentionally, but I’m wondering how it was possible to get a crew into the building and prepare it for demolition in a few hours in the midst of the Ground Zero catastrophe. I’m wondering how you just demolish a structure with a tenant list like that, without emptying the structure first—you know, the files and the safes and vaults and data centers and other secret bits.

In order to accept that World Trade Center 7 was not demolished, you have to pretend. For example, I once got into a heavy argument with a Wikipedia administrator, who said that what Larry Silverstein really meant when he said “pull it” was that the fire department could pull its men out of the building because it was about to collapse. Since when does the fire department need a landlord’s permission to get its own men out of imminent danger? (For more information on World Trade Center 7, visit a website called www.buildingwhat.org, named for the judge who had never heard of the thing and asked, “Building what?”)

There are a lot of other problems with the official story of September 11. In a 2007 article, Robert Fisk, the eminent Middle East reporter for the Independent in the UK, states: “Even I question the ‘truth’ about 9/11.” He starts by saying he hates conspiracy theories, but these questions here are too big to ignore.

Fisk asks about the plane crash in Pennsylvania: “Why did Flight 93’s debris spread over miles when it was supposed to have crashed in one piece in a field?” He asks, “If it is true, for example, that kerosene burns at 820 C under optimum conditions, how come the steel beams of the Twin Towers—whose melting point is supposed to be about 1,480 C—would snap through at the same time? (They collapsed in 8.1 and 10 seconds.)” And, “What about the third tower—the so-called 7 World Trade Center Building (or the Salomon Brothers Building)—which collapsed in 6.6 seconds in its own footprint at 5:20pm on 11 September? Why did it so neatly fall to the ground when no aircraft had hit it?”

Then there are the firemen who said that there was molten steel flowing in the rubble of the Twin Towers “like a foundry.” I could go on and on—I’ve only described some of the more prominent questions. An organization called Architects and Engineers for 9/11 Truth has been asking a lot more of them, though they have a special focus on World Trade Center 7. (You can visit their website at www.ae911truth.org.)

The story that some terrorists from Afghanistan attacked us because they resent our freedom is the product of a nifty picture of world politics. (Actually, most of the terrorists accused were from Saudi Arabia.) If we look at the writing of the Project for the New American Century (PNAC) published in the late 1990s, we find out about the need for a “new Pearl Harbor” so that the United States could fight a multifront war early in the 21st century. Most signers of PNAC, which is basically a vision for perpetual war, became the Cheney/Bush administration.

Once you start gathering them, the facts are so obvious, they can speak for themselves—that is, to anyone who wants to listen. Yet here is what I call the spiritual problem, though. It’s the implication of any of this information, if you accept it. If we shift the narrative of what happened on September 11, 2001, we have to change our worldview.

If we accept that there’s a problem with the official story, we have to open up to the possibility of another version of events—such as the whole thing was a premeditated false flag event. I mean, it didn’t just happen all by itself. If, hypothetically, there were explosive charges put into buildings, and they had to be placed in advance, who did it? And why?

This is too big of a psychological barrier for most people to cross over. Once you go down that road, as someone said to me the other day, you don’t know where you’re going to end up—or rather you do know and it’s not a pretty place. Your whole notion of both society and politics will change, and as a result, you will change. This makes the issue deeply personal—just like we experience it.

You can start by doing something easier, which is calling the September 11 incident what it is, which is something that you don’t fully understand. That takes the pressure off of you to have the answers. If you want to know more, there will be a screening of a new, long-anticipated documentary prepared by Architects and Engineers for 9/11 Truth at the Woodstock Community Center at 7pm on Wednesday, September 7. I am planning to be there. 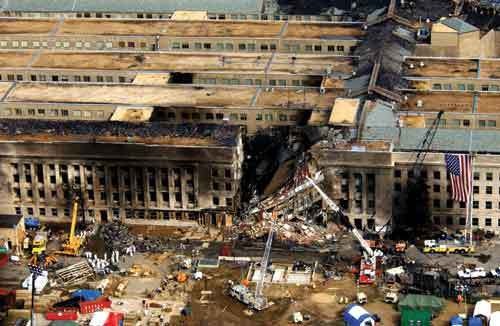