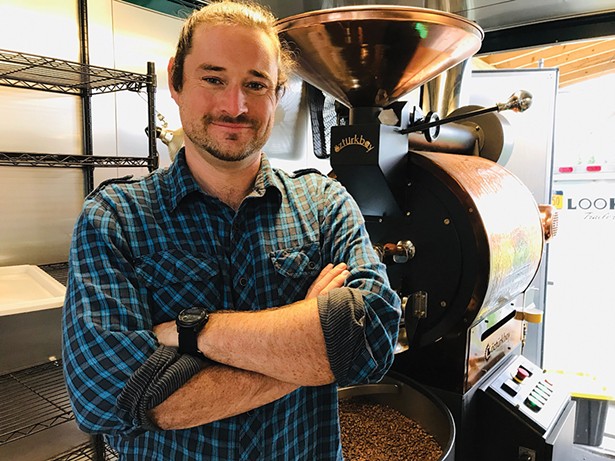 Democracy Coffee's packaging doesn't say much about the product itself. Rather than rhapsodize about the coffee's flavor profile, the back of a 16-ounce bag of "People Power," one of the local brand's roasts, depicts an argument about publicly funded elections between a cartoon dinosaur and Abraham Lincoln.

A system like that would be too expensive, the dinosaur insists. Lincoln disagrees. "Fair Elections are expected to cost each taxpayer less than a penny a day, four scores more affordable than corruption," he says.

The dinosaur laughs at this claim, though it's not without evidence. Several years ago, the nonprofit Campaign Finance Institute found that if New York state were to adopt a small-donor, public-matching-funds program like the one already operative in New York City, the whole thing would cost each of the Empire State's 19-million-plus residents only about $2 a year.

Score one for Lincoln. But then the dinosaur makes a more dispiriting point: Elected officials won't go for it. Having either mastered the art of wooing big donors or already made (or inherited) a pretty penny themselves, today's politicians won't embrace a campaign finance system that might cancel out their fundraising advantages and expand the pool of potential challengers.

Touché? Lincoln, not one to shy away from debate, fires back with an optimistic prediction. "Your plan relies on people being duped by corrupt politicians," he says. "As more people learn the truth, those politicians will become increasingly unelectable."

This copywriting might not excite the coffee cognoscenti. But although Democracy Coffee's parent organization's mission—"to give people a way to rein in the corrupting influence of big money on our democracy," its website explains—sets it apart from other micro-roasters, Kingston-based founder Matthew Edge says plenty of attention is paid to his final product's taste, too. "In our marketing it gets skipped over, not in the product," Edge, 36, says. A graduate of the CUNY School of Law and veteran of the Occupy movement, Edge roasts the fair trade, organic beans, sourced from worker-owned cooperatives in Honduras, Ethiopia, Indonesia, and Colombia, in small batches himself in a concession trailer parked at his friends' farm in the town of Berne, near the border of Albany and Schoharie counties.

The roasts "tend to be on the lighter side" to bring out the coffee's fruitier flavors, says Edge, who in the past worked for a handful of local food establishments, including The Alternative Baker and Market Market Café in Rosendale.

The mobile facility's aluminum interior, with a snazzy, copper-clad roaster at one end, likely looks like any number of other professional operations of this scale and type, though a crystal perched on the machine (the friend who gave it to Edge said it has "protective powers") and a couple of exhortatory stickers affixed to the walls ("When Injustice Becomes Law, Resistance Becomes Duty," one reads) seem to gesture toward the project's idiosyncrasy.

Edge started roasting coffee around 2011, but the whole story dates back to the mid-aughts, when Edge, then a SUNY New Paltz student, formed a chapter of Democracy Matters, a national student organization that focuses on money in politics. "Matt just jumped right on it and has been doing it ever since," says Joan Mandle, the organization's executive director and now a board member of the People's Empowerment Project, the nonprofit that oversees Democracy Coffee. "In fact, he's the only student, as far as I know, who has continued to do it in the kind of passionate way that he continues to do it—building his life around this issue, really."

Following sobering trips to Albany with other student activists to talk to seemingly unmovable state legislators, Edge started a money-out-of-politics voting bloc—essentially a list of potential voters who have asked to be notified of candidates' stances on clean elections and similar issues. To sustain this sort of outreach effort, Edge thought crowdfunding, rather than appealing to foundations, which he says tend to be "controlled by extraordinarily rich people," made more sense. The small donations, in this case, would be purchases of coffee, a commodity he chose partly because of its centrality to the fair-trade movement.

Edge sees the nearly two dozen stores and cafés in the Hudson Valley and Capital Region that now carry Democracy Coffee as ballot boxes that allow consumers to vote year-round for campaign finance reform, which he sees as a crucial first step in curbing the influence of deep-pocketed entities that obstruct the fights against climate change, student-loan debt, and other crises.

Democracy Coffee's cause is boosted by a pragmatic factor: competitive pricing. On a recent visit to Honest Weight Food Co-op in Albany, this writer saw one-pound bags for sale for less than $10. (The relatively low prices boost sales, keeping the coffee on shelves fresh, Edge says.)

Largely a one-man operation, though a few volunteers help with packaging and a contractor handles about half the deliveries, Democracy Coffee sold more than $110,000 worth of coffee last year, Edge says. In recent months, he has increased the average amount of beans he roasts each week by about a third, from 300 to 400 pounds.

The idea is to use proceeds from the growing operation to promote publicly funded elections through online advertising; candidate report cards (more than a thousand were distributed in the lead-up to the 2016 elections, though two contenders receiving high marks, Sara Niccoli and Zephyr Teachout, lost); banner drops; a nascent podcast called "The Tipping Point"; the coffee's continued occupation of shelves and bulk sections; and educational animations, two of which are currently viewable on and more or less strike the same tone as the colloquy cited toward the start of this article. (By the way, in case you were wondering about the dinosaur in the cartoon: The lifeform of Lincoln's counterpart was chosen "just for fun" but also to reflect "modes of thinking that bring us closer to extinction," Edge says.)

"When this thing has really reached a certain threshold of financial well-being, what I'd like to see myself doing full-time is making animations and ads," says Edge. "I'm a filmmaker, and that's really sort of my forte."

There's a kind of intuitive, circular appeal to crowdfunding an awareness campaign for publicly financed elections, which, at least in one popular iteration, essentially use tax dollars to incentivize candidates to seek small donations from ordinary folks. The New York City program matches contributions up to $175 from residents to participating candidates at a six-to-one rate. If someone gives a candidate $100, for instance, the city kicks in $600.

According to its executive director's testimony, the city's independent Campaign Finance Board, which administers the program, paid just over $17 million for last year's municipal elections to 106 candidates, including the two major party nominees for mayor. The program's cost drops dramatically in non-election years; CFB has allocated just $1 million this year, for instance, to cover the potential cost of any special elections.

"It's built on the idea of trying to encourage participation," says Michael Malbin, a professor of political science at the University at Albany and executive director of the Campaign Finance Institute.

A public matching funds system cannot prevent independent expenditure-only political committees, better known as super PACs, from spending gobs of money against you or for your opponent. It probably would take a constitutional amendment to block that. The best way for candidates to fend off influxes of hostile money, in Malbin's opinion, "is to make sure that your within-district networks are strong." This method of fundraising—being able to tell constituents that their seemingly meager contributions will count for much more—helps that effort, he says.

The state legislature could end up seriously considering some sort of clean elections bill next year. The lower house is forever blue, and Democrats are within a hair of taking control of the state Senate for the first time in nearly a decade. Democratic Governor Andrew Cuomo, all but assured of a third term, has repeatedly included a public matching funds program in his annual executive budget proposal, though it has never made it into the final deal. "There actually is kind of a star alignment happening in New York," says Edge, though he allows the legislation might not pass "this cycle" because "the people who are against it are the ones that are the most powerful." Proponents better come caffeinated.