Driving down Route 9 outside Garrison, it’s hard to miss the Bus Stop Grill—a large bright red bus-turned-restaurant parked on the side of the road. The exterior decor offers passersby glimpses of what they’ll find within the mobile diner, with images of burgers and sandwiches emblazoned on its sides and decal call outs to popular items in bold lettering.


The mobile restaurant is the brainchild of local business owner Ernest Knippenberg, whose bus company Hudson Valley Charter Service has been in the family for more than 50 years. Knippenberg, 79, got the idea when he saw the large transit bus at an auction. “He bought it right off the road, and everyone was scratching their heads,” says Heidi Bennett, his daughter and Hudson Valley Charter Service employee.


COVID-19 hit transportation companies hard. Hudson Valley Charter Service couldn’t run their usual routes. Knippenberg thought that opening a food bus might help offset the loss. He sprang for the transit bus at an auction when he saw that it had two levels, which gave it the potential for a more spacious interior kitchen. Now, the upper level is the kitchen, and a couple steps down is the service counter––seemingly a simple set-up, but one that required a lot of trial and error to perfect. “It came out even better than he thought,” Bennett says. “He’s an entrepreneur to his core.” 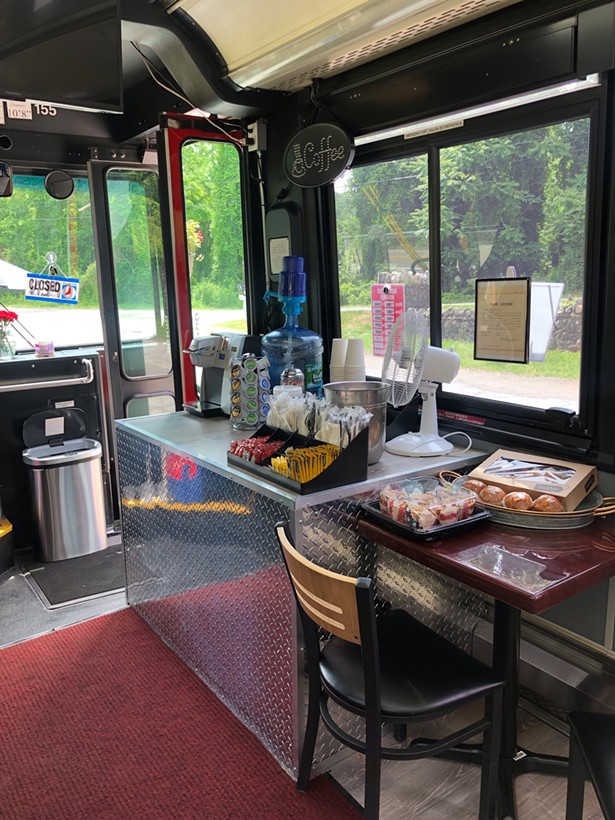 Knippenberg’s family had to gut the entire bus, order new parts, construct a kitchen, and pass the New York State Department of Health’s food safety inspection. “The inspectors were floored by it,” Bennett remembers. “They’d never seen anything like it before. I’m glad someone else thought this turned out as well as I thought it would turn out.”


Opened in April, the Bus Stop Grill rolled right into high gear, with plenty of customers from day one. “People are thrilled with it because it’s so unique. There’s no food bus or food truck around like that at all,” says Bennett. Inside the cherry red exterior, you’ll find a mini self-serve coffee counter and two tables. The kitchen occupies the whole back of the bus, with shiny stainless steel appliances and a drinks cooler. On nice days, they set out plastic tables and chairs in the lot for additional seating.


Bus Stop Grill offers both breakfast and lunch, served from 7 to 11am and 11am to 3pm respectively. The menus feature American classics––breakfast sandwiches, rolls, bagels, pastries, and muffins in the morning, with corned beef and pastrami sandwiches as the mainstay of the afternoon offerings. For Knippenberg, the lunch menu was non-negotiable. “In his mind, he’s always been adamant that corned beef and pastrami sandwiches were the number one,” says Bennett, and he was right––those items are the most popular on the menu.


Bus Stop Grill is a family effort; Bennett’s daughter-in-law is the cook and baker, and Bennett’s daughter does the social media and monitors the email inbox. Bennett herself has now taken a bit of a backseat––she continues to work for Hudson Valley Charter Service—but in the opening weeks she would go out and buy produce for Bus Stop Grill, store it in her fridge overnight, and have her husband or son drive it to them in the morning. Though Bus Stop Grill spends most of its days parked on the side of Route 9 in Garrison, it has recently started rolling up to private events. Just last week, they did a PTA night and they are getting inquiries about being a food vendor at local festivals. The bus’s usual roadside perch fills the void left by a popular hot dog truck that Knippenberg used to pass on his daily commute. The lot had been vacant for years before the creation of Bus Stop Grill, and he thought the traffic buildup in the area made it the perfect location. Knippenberg’s entrepreneurial spirit is still going strong. “I wish I wasn’t so old,” Bennett remembers him saying after he got Bus Stop Grill rolling. “I have so many good business ideas.”