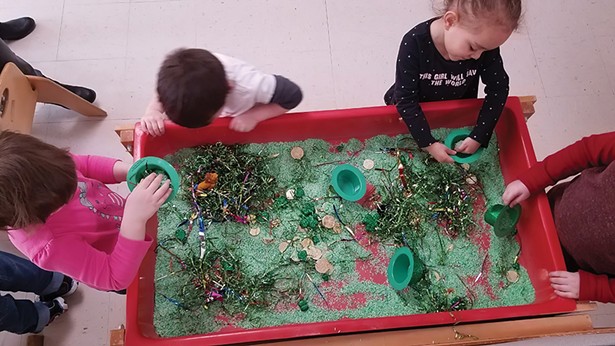 When Debbie Sinon's son, Brenden, was diagnosed with autism at 18 months old, there was a lot to navigate, from new doctors and therapies to early intervention programs. There was also a new feeling to steer through: a sense of loneliness. "I didn't know anybody else who had a child with autism and I didn't know what to do," recalls Sinon, who owns a construction company in Beacon with her husband. "Going to a mommy-and-me class was not an option, because he didn't sit still. He didn't do the typical things that toddlers do. It was very isolating. Some parents have other children who might be neurotypical, but Brenden is my only child. Being isolated, when you're in a situation like that, is hard." With the fierce determination that marks many parents of special needs kids, she immersed herself in finding the best next step for her child, eventually enrolling him at the Center for Spectrum Services in Kingston, for autistic kids ages 2 to 12. There she found a place where Brenden could thrive, along with family outreach, parent support groups, and the sense of community that she craved.

School is a huge part of life for Brenden, now 7, and making big strides. He's gone from being nonverbal to using a tablet to communicate, to beginning to use words just two years ago. But school isn't everything, and Sinon wants her son to have more of the world available to him. She tried enrolling him in tot soccer, but all he did was run. "It wasn't really structured enough for his needs," she says. "And a lot of the other activities I've tried to bring him to were not going to work out for him." Ultimately, Sinon decided that if the world can't come to Brenden, she would bring the world to him. She and a fellow parent, Julie Fitzpatrick, are opening Kid-leidoscope, an after-school and weekend activity center in Wappinger's Falls that will offer a range of classes—from art and cooking to movement and sports—for special needs kids, their parents and siblings, and special needs adults. The kids' classes will be mommy-and-me style with parents involved. "I want a place where my child can go to be accepted, be himself, not be judged, and just be in a community of people that want to help each other. It's also about parent connections—I don't want anyone to feel isolated the way that I did," Sinon emphasizes. "It's important to have a place to go where everybody realizes that people have different abilities and that's okay, and to support each other."

Making a Case for Neurodiversity

As autism rates climb at an astonishing clip—currently, 1 in 59 kids in the US have Autism Spectrum Disorder—there's a burgeoning movement to create autism-friendly environments. Whether it's the launch of a business-like Kid-leidoscope, or a mock village-like LifeTown in Livingston, New Jersey—where people with special needs can practice life skills such as shopping for groceries and going to the bank—we're seeing an uptick in the creation of spaces designed for people on the spectrum. Such spaces are desperately needed for the many families and individuals who struggle not just with educational and therapeutic needs but also with feeling left out of the community at large. "Many years ago, these kids were hidden from society," says Leah Suita, the Family Service Department Head as well as the Home and Community Based Program Coordinator at the Center for Spectrum Services, which has kids' day schools in Kingston and Ellenville, as well as outreach services throughout the Mid-Hudson Valley. "Now these individuals and their families are feeling, 'We have a right and we have a responsibility. We need to be included and society needs to support us, not judge us.'"

It starts with understanding that no two cases of Autism Spectrum Disorder (ASD) are alike. ASD is an umbrella term that encompasses a wide range of individual autism profiles—from milder manifestations formerly known as Asperger's syndrome (high-functioning autism), to much more severe social, communication, and behavioral challenges. Over 3.5 million Americans are affected, and ASD is four times more common in boys (the incidence in boys is 1 in 37; in girls, it's 1 in 151). "The numbers are increasing because the prevalence is truly increasing in the community, but we're also better able to diagnose it, and at younger ages," says Siuta. As for why autism prevalence is growing, that's the million-dollar question for scientists today. "They consider it to be a genetic vulnerability or predisposition that's triggered by an environmental insult. There is very likely a genetic component. But something may be triggering that, either in utero or after birth, and that may be something in the environment. At this point it's too broad to even guess [what that trigger could be]."

One thing the science is clear about is that early intervention, typically starting at 18 months, is one of the most effective factors in creating more positive outcomes for these kids. Starting at age 3, school and county services kick in, including a range of modalities from speech, occupational, and play therapy to special education and physical therapy as needed. Puberty and the teen years can bring new challenges, disrupting the regularity and habit that many autistic kids depend upon. In perhaps the biggest change of all, autistic individuals age out of school services at 21. "The transition from children's services to adult services—most families describe that to us as falling off a cliff," says Eliza Bozenski, Chief Development Officer at the Anderson Center for Autism in Staatsburg. The Anderson Center is an epicenter of all things autism—from its residential school, adult group homes, and Lifelong Learning Center™ day programs across the mid-Hudson Valley, to its international training program and consulting business. While the organization has about two dozen adult group homes, Bozenski notes that in the larger community, such residential opportunities are often in short supply. Vocational opportunities for autistic adults may be even more sparse.

While every person on the spectrum is different, many deal with social and behavioral challenges that are the hallmarks of ASD. These might include being agitated by sensory stimulation, having difficulty picking up social and emotional cues, and having trouble understanding other people's perspectives. All of these challenges can factor into how we go about creating autism-friendly spaces. "Something new that I'm seeing are community events that are being called sensory-friendly," says Anna Millenson, Family Services Coordinator at the Center for Spectrum Services. "Such as sensory-friendly movie nights, or movie afternoons, where the volume at the theater is turned down so it's not overwhelming. The lights might be dim rather than off. There does seem to be increasing community awareness." There's also a growing sense of unity and even pride in today's autism community. The teenage Swedish climate activist Greta Thunberg, who has high-functioning autism, describes being on the spectrum as her superpower, giving her an out-of-the-box perspective on climate change. "There's a strong and growing movement to focus on strengths," says Millenson, "rather than on the challenges that one might have socially or in the community."

It Takes a (Sensory-Friendly) Village

The move toward creating autism-friendly communities may well be the future of autism. And one community is pioneering this movement close to home: the Village of Rhinebeck. About a year ago, the Anderson Center approached Rhinebeck's mayor, Gary Bassett, to propose that the village become the first municipality of its kind to be trained in a program they call Autism Supportive Environments. "This program allows our experts to come into any type of work environment and provide training for staff and guidance for changes in the environment—anything from lighting recommendations to having fidget toys available for somebody who's bringing in a loved one on the spectrum and needs that child to feel welcomed," says the Anderson Center's Bozenski. The answer from the mayor was a resounding yes, and with funding from the Thomas Thompson Trust, the village launched phase one of the project. "It allowed for consultants from Anderson to come to businesses that signed up to do one thing—and that became our hashtag, #DoOneThing—within their business to make it more autism supportive. I believe that close to 60 percent of the businesses in the Village of Rhinebeck have now signed on, and the impact in the community has been significant."

Several businesses offer sensory-safe spaces—such as one that opened its space for people on the spectrum to escape from sensory overload during a parade last fall. "We heard from a family that it was the first parade they'd ever been able to go to from start to finish with their children, because they finally had a place where they could go when their [autistic] child felt overwhelmed by all the noise and stimulation," says Bozenski. "It was so meaningful for them and they were so touched that they could see the parade from that safe space and enjoy this community event together." Even the squad cars in the village police department now have sensory kits filled with things like noise-cancelling headphones and fidget toys to help calm children on the spectrum. Restaurants might offer reduced wait times, or the chance to order off-the-menu foods for those who need it. "Those types of things seem small but make a huge difference," she says—and not just for residents but also for travelers who see Rhinebeck as a place where their child is welcome.

And it doesn't stop with Rhinebeck. Dutchess County Executive Marcus Molinari, who has a daughter on the spectrum, created ThinkDIFFERENTLY—an initiative and a resolution to create welcoming environments for people with special needs (not just autism). "We're creating greater sensitivity and supportive environments for people of all abilities," says Toni-Marie Ciarfella, Dutchess County's Deputy Commissioner of Special Needs, the first position of its kind in the state. "ThinkDIFFERENTLY is challenging not only the business world but also the academic world, such as our partnership with Dutchess Community College to offer the Think Ahead job readiness program. Other communities are being inspired, and wherever we go, we're taking the opportunity to build on what's happening in Rhinebeck, which is gold."

Building autism-friendly spaces takes time and grant money, and more importantly, awareness and sensitivity. As we wait for more communities to catch up, there are little things we can do to move the needle forward. "We can be more aware of what autism is, and not think of it as poor parenting, say, when we see a child on the spectrum [who's acting out] in the grocery store," says Siuta. "Maybe it's letting them get in line ahead of us. Or offering help rather than judgment." And we can open our minds to concepts like neuro-diversity—"seeing that every individual, whether they have a disability or not, has strengths, character, personality, skill sets, that are different from one another," adds Siuta, "and that being an inclusive community means including everybody."

That's people like Brenden, Debbie Sinon's little boy, who's working diligently to develop his speech skills and communicate with the people who love, teach, and care for him. With the right nurturing, and a community that's making space for him, there will be fewer obstacles and more possibilities. "The growth that I've seen in him is amazing," Sinon says. "You see his little personality coming out and it makes me cry with joy. He works so hard. I just think the sky's the limit for him."