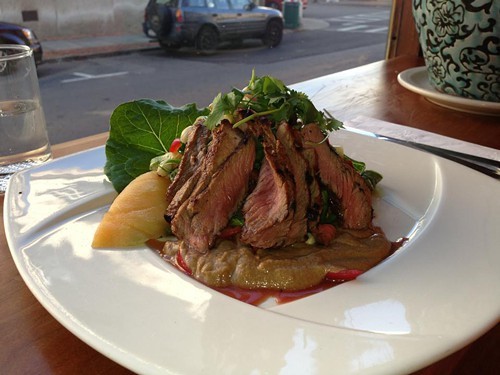 There’s a word that can instantly elicit eye-widening anticipation, hunger, and an enthusiastic “Yes!” from foodies: brunch. And our readers love Duo Bistro’s menu of sweet and savory dishes enough to garner the Kingston eatery a Chronogrammie win. “I’d like to think Duo’s brunch is so appealing because we offer a really good, eclectic menu, not like what you’d typically find at a diner or breakfast spot, and in a really beautiful building,” says owner and chef Juan Romero. “We’re also located within a really niche economy where people love elevated food; sometimes they just want more than a Western omelet with rye and a stack of pancakes.”

Romero also gives due credit to staff, some who have been with Duo through the last eight years. “Our staff is one of the big reasons why we’ve been popular—they have great ideas, create the right atmosphere, and add so much to the customer experience,” he says. He acknowledges former co-owner Shawna Dunworth and front of house manager Sheri Craig with developing their popular cocktail and drinks menu; Duo has also been recognized by our readers with a second-place accolade for Bloody Mary.

But as they say, love is not enough; after financial complications exacerbated by the pandemic shutdowns, Duo will not be reopening. “As good and strong as our concept was, we weren’t doing the greatest going into the pandemic, and now, there’s no way we can recover from the losses,” Romero says. “I think the industry as a whole is going to feel the effects for a while. Even when restaurants can reopen and function normally, it’ll be some time before a table of four can sit next to another and not have a sense of fear when someone sneezes. Also, with so much time at home, a lot of people have been learning to cook, realizing they don’t need to go out to eat three times a week.”

[Note from the Editor: After we went to press with the July issue, Duo Bistro owner Juan Romero informed us that there is a chance that Duo will remain open! Stay tuned for details.]

That said, he encourages people to still support local farmers and food producers as much as possible. “Another thing we promoted at Duo was the local food movement—clean, responsible food—and I really want to encourage people to still seek that out,” he says. “When the pandemic struck, for a while many people could only shop at Walmart and other major chains where the food comes from anywhere, but it’s important to try as much as possible to support community agriculture and food producers; they’ve been hit hard, too.”

Though it may be a while before Romero takes on another restaurant (miss you, smashies), he says he wouldn’t rule it out. In the meantime, he’ll be focusing his attention on his catering service and food truck, Lekker, while also enjoying some extra time with his kids, ages four and eight. “This year has brought an unexpected blessing to spend time with my kids—I don’t usually get to enjoy summers with them,” he says. “But I expect my catering business to pick back up in a few months, too—and there are always more projects on the horizon.”