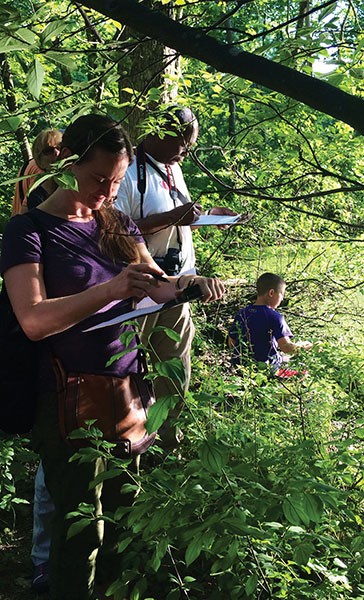 The Hudson Valley is a place where creativity and ecology have always converged to make things happen, so it's no surprise that this region is a hotbed for phenology. In fact, Hudson Valley citizen scientists are collecting the most phenology data in all of New York State. Phenology comes from the Latin root pheno, meaning "to appear" or "to bring to light," and it describes the timing of seasonal changes and life-cycle events in the natural world.

"Phenophases" are distinct life cycle episodes such as budding, flowering, leafing out, fruiting, migrating, and hatching. "When gardeners start seeds, plant, harvest, or collect seeds, they are essentially tracking phenophases in order to grow what they want," Battle says. "Gardeners also tend to keep records year to year of when things happen in their gardens. This is the essence of tracking phenology—paying close attention to seasonal change and keeping records."

Across the country, more than 15,000 citizen scientists are tracking phenological data for a proscribed set of plants and animals. Many of them are gardeners collecting data from plants in their own gardens; others are going to designated "phenology trails" and other sites in the community. Many of them are entering their data in an elegant national endeavor utilizing Nature's Notebook, a data-collecting tool of the USA National Phenology Network.

In 2015, New York Phenology Project (NYPP) observers contributed more than 10 percent of the national dataset; nearly 70 percent of those NY observations came from Hudson Valley-based volunteers. The national total number of observations recorded in Nature's Notebook in 2015 was 1.8 million!

The mission of Nature's Notebook is to encourage close observation of nature both for the joy of it and the data that result. Theresa Crimmins is assistant director at USA National Phenology Network. "As climate changes, the timing of these life-cycle events also changes for many species. However, not all species are exhibiting changes, and the changes that are occurring are not all in the same direction or of the same magnitude."

Crimmins says that the implications for this are wide-ranging and not yet completely realized, but include mismatches in the timing of open flowers and the arrival of pollinators depending on flower food sources, the spread of invasive species, and changes in species ranges. "Local observations of phenology can provide critical data for scientists studying the effects of changing phenology," she says.

When the Lilac Leaves Unfurl...

One of those data collectors in the Hudson Valley is Lake Katrine-based garden writer, speaker, and photographer Marie Iannotti (Gardeningthehudsonvalley.com), whose name may sound familiar because she is the gardening expert for About.com. She has written three books, including The Timber Press Guide to Vegetable Gardening in the Northeast and The Gardener's Guide to the Hudson Valley.

Iannotti remembers getting phenology-based planting advice from an older gardener who advised her to "plant your potatoes when you spot the first dandelion." She says, "I started poking around to see if this kind of advice was just folklore or if there was some research behind it. When I found out the research on phenology is ongoing and anyone could participate in tracking, I jumped in, and I started collecting all the tips that had to do with gardening."

Iannotti takes part in the New York Phenology Project through Nature's Notebook. She says, "Tracking phenology is a great way for gardeners to get to know the cycles of nature and which things tend to occur at the same point in time. I started by tracking lilacs, and know that when the lilac leaves first start to unfurl, I can plant lettuce and carrots, and when the lilac blooms, it's safe to plant cucumbers and beans. When the forsythia blooms, I plant peas. It's not an infallible system, but it's a great tool for planning and for increasing your knowledge of natural phenomenon. And since weather can be so variable, it's more accurate than counting backwards from your last expected frost date."

According to Iannotti, phenology makes us more aware of not just the changes, but also when something is wrong. For instance, why would we suddenly be seeing so many grasshoppers, or an increase in poison ivy? When should we be on the alert for Japanese beetles? When will cabbage worms be hatching, so we remember to go looking for them? "I'm also tracking my garden nemesis, the groundhog," she says.

NYPP It in the Bud

Kerissa Battle says that one of the great things about the NYPP is that anyone—whether you have volumes of experience with plants or animals or not—can create a monitoring site almost anywhere. "Even if you only have space for a container garden outside of your house, or you just tag one red maple on the street in front of your house, or you get permission from the town to mark plants on your favorite local trail—you can join this effort," she says.

Battle set up a phenology trail around her property (which includes her garden) and checks her plants nearly every day when she takes her dogs for a walk. "I get my exercise and slow down my mind while I take in everything I am observing," she says. "It is meditative and enlivening all at the same time. What could be better?"

"Beyond the pure pleasure of phenology monitoring, you can also craft your garden or yard within the larger context of the surrounding ecosystem," Battle says. She goes on:

You begin to notice the same pollinators on your tomatoes that you are observing on the milkweed in the field. You begin to notice that the red maples in your yard are flowering later than the red maples in town. You start wondering if the heavy fruit set on the mountain laurel near your garden is because your garden is so lush this year that native pollinators decided to nest nearby and are now pollinating everything in sight. What insects are arriving and when; what birds are hanging around your gardens; what else is in bloom near your garden that might be attracting pollinators?

Suddenly you realize that the pollinators are not just servicing your garden—you are actually feeding them. And then they are moving from your garden to the patch of wild bergamot down the road that you are observing and the fertilized seeds of the wild bergamot are feeding the birds at the end of the summer, and bam! Your intentional watching has placed your garden in the center of a bustling play—with you as both actor and audience.

Battle encourages those who are interested in creating a new NYPP site—which could be in the backyard.