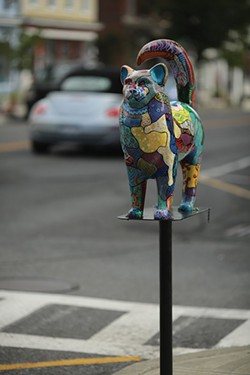 A case could be made for the city of Hudson and the village and town of Catskill as the gateway to the "real" upstate, econo-cultural centers and seats of their otherwise rural counties that are past the outer limits of all but the most determined commuters. In the later mid-20th century, when heavy industry nosedived, both experienced periods of shuttered storefronts and tough, bleak times.

Hudson found its stride first. Upstate's Downtown has always been a place for the brave, from the Quaker whalers who settled it to the painted ladies of the Diamond Street district, and those who claimed it in the name of art and excellence and simply refused to give up. Mixed-use urban planning and waterfront reclamation began in the 1980s; in 1991, activist artists Linda Mussmann and Claudia Bruce opened alt-arts programming there, claiming a former bakery for their "dream child," Time and Space Limited. If international performance art star Marina Abramović ever opens her planned institute in Hudson, she'll have the city's pioneering gallerists like Carrie Haddad to thank.

Sustainable mass has long since been reached, and the star of this historic, walkable gem just keeps on rising. "Travel like Katy Perry and Usher," began New York magazine's 2015 travel feature on Hudson; their 2010 expedition found "a slew of new galleries and bars moving into dated factories," which was not new news for local folk. From morning cuppa to after-hours soiree, with a tasty filling of boutique and gallery exploration, Hudson has become nothing less than a five-star destination.

Meanwhile, across the bridge, Catskill has awakened from a longish catnap and is pouncing on its own bright future. And, as in the day when a young Frederic Church was mentored by Hudson River School founder Thomas Cole, artistic contagion is ragin'.

As in Hudson, the day's won and made by the makers. When Etsy opened administrative offices in Hudson a couple of years ago they called the place an "obvious fit," noting "it seems like everyone you talk to makes something." In 2014, three former factory buildings in Catskill were reborn as the Catskill Mill (a project of Etsy founder Rob Kalin), providing space for clay, wood, metal, leather, electronics, textiles, and fiber arts creatives. A restaurant and hotel are in the works, to be furnished and equipped by the products of the resident artisans.

Hudson Valley magazine tagged Catskill one of "8 Hot Hometowns" in 2013, citing "Now Open" signs downtown, historic architecture, and two sweet riverfront parks. The Catskill Local Development Corporation, which has been facilitating discounted rent and other perks for new small businesses since 2012, and the Heart of Catskill Association, which sponsors Music in the Park concerts and themed Second Saturday strolls, have gained satisfying traction.

There were naysayers along the way. There always are when ideas are bold, like decorating downtown with whimsical cat sculptures or advertising a year's free rent on a classic café to a chef who'd bring topflight skills and a concept, or filling your upstate Main Street with the art of Occupy Wall Street, as the Greene County Council on the Arts did as part of their "Masters on Main Street" series.

But the bold ideas have won the day, like a plump tabby materializing around a Cheshire grin, and Catskill is taking its place alongside Hudson as a destination that lives up to sharing its name with one of the region's top two iconic natural highlights. Verdigris Tea, beloved in Hudson for its hot beverages, smoothies, chocolates and baked goods, has opened a Catskill branch. There's a restaurant and wine bar, 394 Main, joining the Catskill Mill food truck (their restaurant is in the works) as new additions to a burgeoning foodie scene.

And Catskill has landed the avant garde Bridge Street Theatre, dream baby of John Sowle and Steven Patterson, who've been producing acclaimed theatre in New York, Los Angeles, and San Francisco as Kaliyuga Arts since the 1980s. Renovation of their 12,000-square-foot factory began with a space they call the Speakeasy; their location, neighboring the high school, has educators excited. Over Labor Day weekend, you can catch the acclaimed "Dirty Paki Lingerie," and on September 26, a Gallimaufry fundraiser, which Sowle describes as "a bunch of theatre groups, musicians, magicians, and midway stuff that patrons will wander through, a bit of New York's 'Sleep No More' in Catskill."

From either side of the river, wander across the Hudson's other walkway, the Rip Van Winkle Skywalk on the Rip Van Winkle Bridge, and take in unparalleled panoramas of the scenery that inspired an entire school of art in the mid-19th century. Touching ground on either shore, you can immerse yourself in the life of it—150 years young, growing stronger all the time.