A Film About Lorna Tychostup 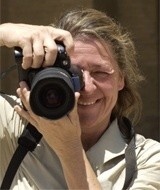 In 2003, New Paltz resident Lorna Tychostup made her first trip to Iraq just before the start of the war to reveal the humanity of Iraq's citizens through her photojournalism. The single mother traveled to Iraq eight times, seeking out locations beyond the Green Zone—staying in small, unprotected hotels and riding in local taxis. Bordering on Treason is an in-progress documentary, which follows Tychostup's story, with over 130 hours of footage. The film has been a nine-year collaborative effort by independent filmmaker Trish Dalton, supported by the non-profit feminist media organization Women Make Movies.

Through her photos of everyday Iraqi people, Tychostup hoped to sway the American people from supporting an invasion. Consequently, her attempt to enlighten the American public turned to controversy as Fox news broadcasters called her efforts “villainous and bordering on treason,” and accused her of “aiding and abetting the enemy… on the brink of war.” Tychostup served as Chronogram's News and Politics editor from 1999 to 2011, reporting on her experiences from Iraq and various other points in the Mideast. With a Masters in Global Affairs from NYU, Tychostup has trekked across the US to present her photo exhibition “Looking into the Eyes of the Enemy: The War in Iraq,” and tell her story encountering the Iraqi people in the face of war.

Created by director/producer of the film, Trish Dalton (Why Are We in Afghanistan? A Movie and Farm Sanctuary), creative producer Jesse Epstein (Wet Dreams and False Images, The Guarantee), and associate producer San Tong, the final intent is to bring Treason to the global community and festivals internationally. With Treason still in the rough-cut, the filmmakers are working to raise funds and complete the film with fine tuning and editing. To learn more about Bordering on Treason, view the trailer, and find out how to support the film, visit: Indiegogo.com/Bordering-on-Treason.